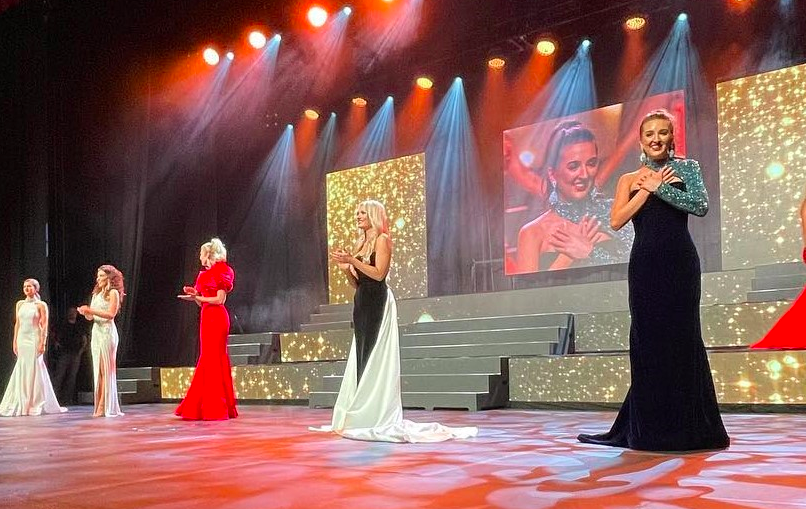 Lindsey Larsen, Miss Lehi 2019 and 2020, competed in the Miss Utah Scholarship Competition last week, June 7-12. Larsen’s preparation paid off on the final night of competition when her name was called. “I am so honored to say that I earned second runner up at Miss Utah and will receive a $3,000 scholarship,” said Larsen. “The last Miss Lehi to place in the top 5 was in 2010, and I feel so incredibly honored to represent Lehi.”

Larsen was ready to compete for Miss Utah in 2020, but the competition was canceled for the first time in the history of the pageant. “It was a rollercoaster of emotions going into Miss Utah week. I was super excited to finally be at Miss Utah, which is something I have been working towards for almost two years. I felt very nervous because I had made a goal of making it to at least the top 12,” said Larsen.

“When they called my name for top 12, I was so shocked,” Larsen continued. “I wasn’t expecting to make the next cut, but it happened, and I was ecstatic being called into the top five.”

Miss Lehi has a team surrounding her, all volunteering their time. “I had so many wonderful people involved in preparations,” said Larsen. She and her ballet teacher co-choreographed her talent piece titled, ‘Stars and Stripes.’ “It is my favorite piece I’ve ever performed.”

Larsen made a goal to meet with at least two people a week for interview prep since April. Her Lehi City team included Kate Daly, Nicole Revill, Andee Devore and Brittany Tait. “I even had the opportunity to meet with some Forever Miss Lehi’s and titleholders from surrounding states to hear feedback and advice. I couldn’t have made it without these amazing people,” said Larsen.

“This opportunity has been incredible and I’m honored I got to represent Lehi City at Miss Utah,” concluded Larsen.