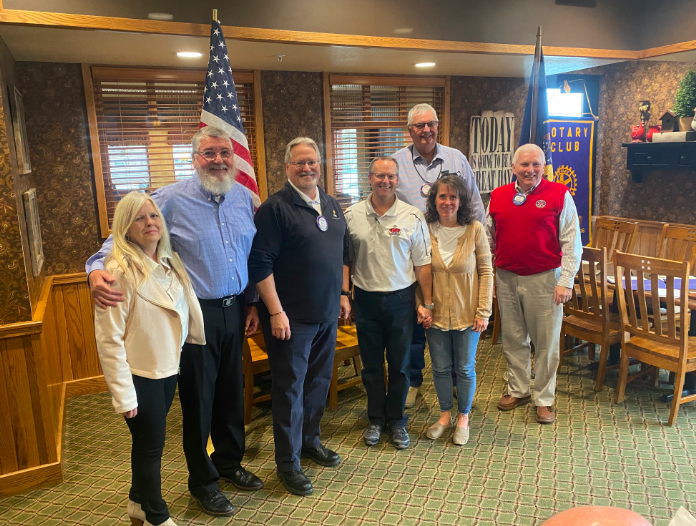 With his wife Colette by his side, Mayor Johnson, was recognized as a charter member of Lehi Rotary and for his ongoing support of the local non-religious, non-political organization providing “service above self” in numerous ways in Lehi.  Due to the demands of this office, he has not been actively involved in Rotary since he was elected mayor, he remains a loyal friend to Rotary and known for his extraordinary service in the Lehi community.

Madsen, whose wife Vanessa, was also in attendance, was recognized as a faithful friend of Lehi Rotary for more than a decade, annually contributing support of the service club’s dictionary project and as a hole sponsor and team sponsor for the club’s golf tournament fundraiser held every summer.  He has also been a generous and supportive donor to the Lehi Rotary’s holiday Sub-4-Santa Project, which in 2020-21 was the most successful holiday event in the history of the club, brightening the holidays for numerous local families.

Lehi Rotary Club, chartered by Rotary International in 2006, has 15 active members who are involved in monthly projects around the community including support of Tabitha’s Way, the local food bank.

Lehi Rotarians also purchase and distribute paperback dictionaries for third graders in 20 elementary schools, often the only book the children have ever owned.  Another favorite service project by the men and women of Lehi Rotary is delivering Meals on Wheels five days a week to shut-ins in the Lehi community.

Continuing the legacy of Rotary International’s founder, the Paul Harris Fellow program recognizes individuals who contribute, or who have contributions made in their name, of $1,000 to The Rotary Foundation. The charity supports service projects around the world, including the Polio Plus program, Rotary International’s worldwide effort to eradicate polio, finally and forever.

Due to the efforts of Rotary International and their partners over the past 35 years, the incidence of polio has been reduced by 99.99 percent worldwide.  Currently, there have been no new cases of wild polio anywhere in the world since New Year’s Day 2021, a total of 20 weeks.

Lehi Rotary Club welcomes any interested service-minded men or women to their weekly meeting each Wednesday at Chuck-A-Rama at noon.

For more information about Lehi Rotary or the programs of Rotary International, please call Cecil Shern at 801-828-8363 or email at cecilshern@yahoo.com.