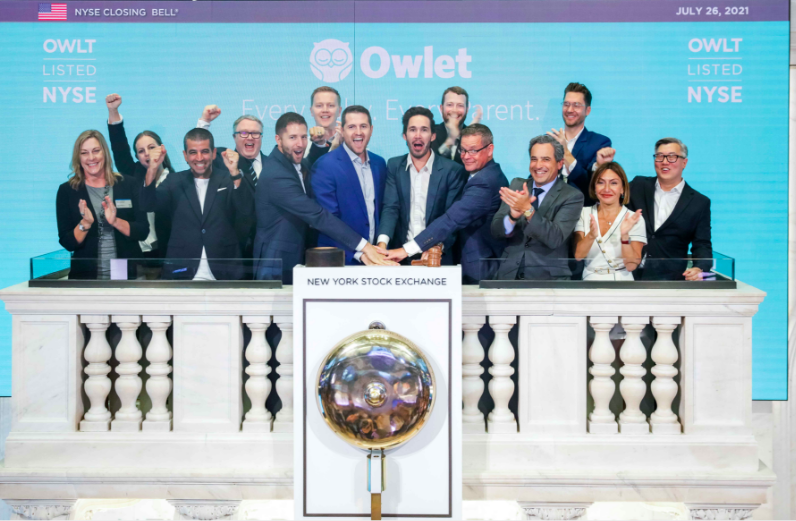 On Monday July 26 a small team of executives from Lehi-based Owlet rang the bell to signal the end of the day’s trading at the New York City Stock Exchange.

The symbolic act comes 10 days after Owlet became a publicly traded company via a merger with the Sandbridge Acquisition Corporation.

“It’s kind of surreal,” CEO and founder Kurt Workman said. “Who knew nine years ago when we were starting out and paying in terms of pizza that we would be here today.”

Workman explained he and his fellow executives decided to take the company public last year. At first, they explored what Workman described as the “traditional route” where they would seek investors to ensure interest before the initial public offering of shares. Owlet began the process of seeking investors to raise capital when they discovered the Sandbridge Acquisition Corporation which already had roughly the amount of public capital Owlet sought to raise in their funds.

“They said, ‘hey we like you guys,’ and we liked the people who work there,” Workman said. That connection with Sandbridge led Owlet to forego the traditional route and instead choose the SPAC route – merging with a special purpose acquisition company. Workman explained it sped up the process significantly.

“It’s kind of like a reverse acquisition,” Workman said. “They buy you, but then you own the majority of the company and it’s under your name. It’s just a different way to take companies public.”

From start to finish, Workman said the process took around 10 months. Owlet and Sandbridge first announced the intention to merge in February, and the decision was finalized on July 14. Many companies go public in order to raise capital, and the Owlet-Sandbridge merger acquisition is no exception. The decision provided Owlet with $135 million to expand its product line and establish a more global presence.

“We’re going to double down in two major areas. One is in engineering, to really build out a technology infrastructure, to kind of democratize access to the resources that are in the hospital for parents at home and make them accessible and usable,” Workman said. “The second big area is just making more parents aware of Owlet.”

Owlet is currently beta-testing a pregnancy band which allows pregnant women to do things like track their baby’s heartbeat, and their own heartbeat and sleep patterns. The company is also looking to expand across Europe.

In addition to ringing the bell, Owlet celebrated another milestone: monitoring 1 million babies. As part of the celebration, Owlet will donate $1 million of Smart Socks to nonprofit partners around the country so parents who normally wouldn’t be able to afford the technology can access it. The move is a reminder as to why Owlet began in the first place — to help parents take care of their babies.

“The main reason we’re here is for parents and their children,” Workman said. “It’s a big day in New York, it’s exciting to have a lot more funding … but at the end of the day, it’s about the mission.”