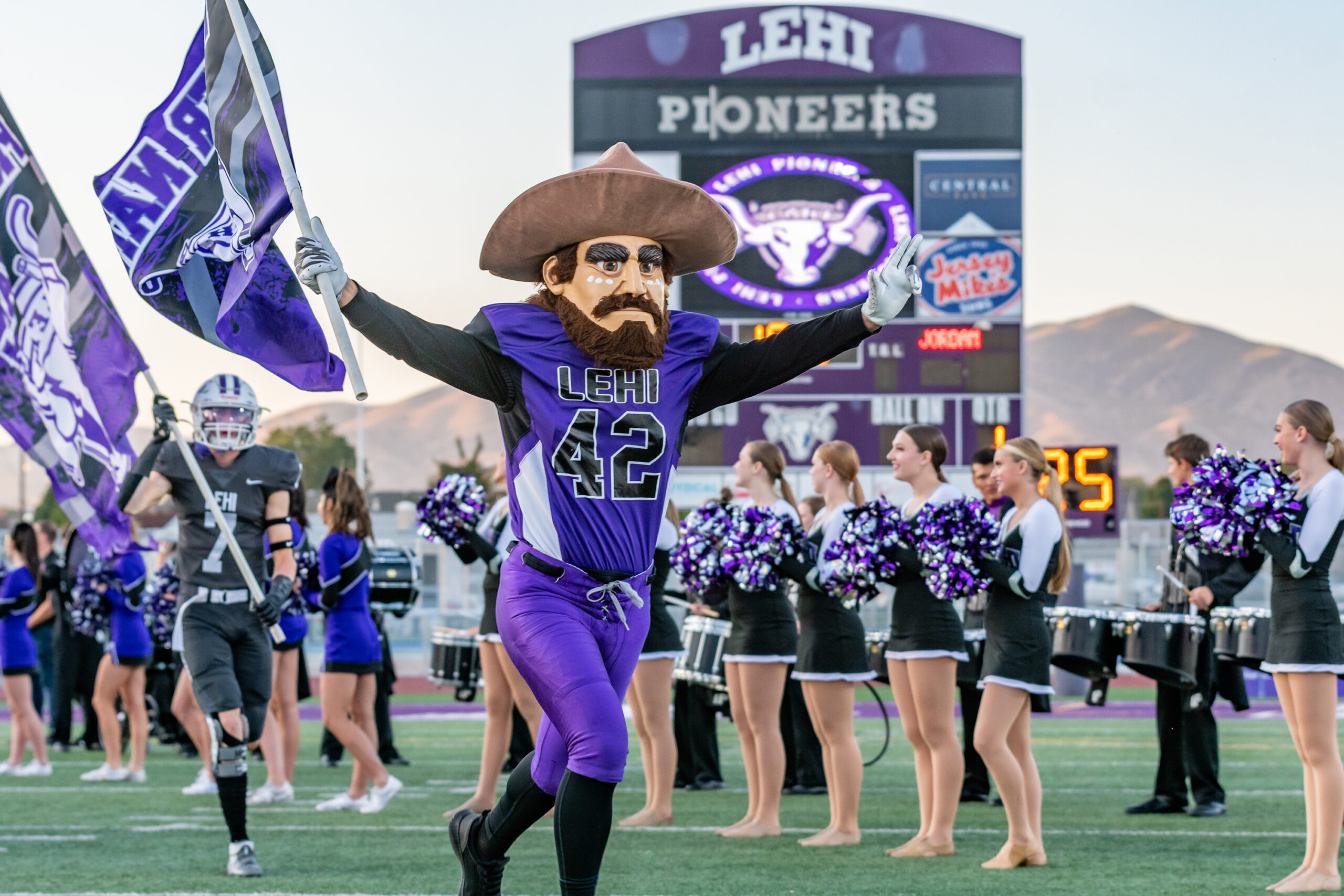 The Pioneers scored two touchdowns in the first four minutes against the Beetdiggers and never looked back as they rolled to a 53-10 victory over Jordan Sept. 24 on Homecoming night.

With just three minutes gone off the clock, Lehi junior quarterback Jackson Brousseau threw the first of his five touchdown passes in the contest, this one to senior wide receiverJaxon Christensen for a 13-yard score. Senior kicker Zane Goodrich made it 7-0 with the PAT.

The Beetdiggers didn’t get anywhere on their first possessionand left the Pioneers with a very short field at the Jordan 34 after they punted. It took less than a minute for Brousseau to connect with senior wide receiver Isaac Dayley 21 yards for the touchdown.

The Goodrich PAT was good for a 14-0 advantage with eight minutes still left in the quarter. In very short order, senior defensive tackle Kimball Tamala recovered a Beetdigger fumble at their 30-yard line.

Christensen subsequently hauled in his second TD pass of the evening, this one for three yards, to push the Lehi advantage to 20-0 with five minutes remaining in the period.

Junior defensive back Lance Olsen intercepted a pass during the next Jordan possession, but the Beetdiggers soon got the ball back with a pick of their own. However, they were still unable to make much headway against the fierce Pioneer defense.

With yet another short field, Lehi moved quickly towards the target and Brousseau found junior tight end Koby Moore for a 12-yard score just a minute into the second quarter. The Goodrich PAT made it 27-0.

Jordan again failed to move the ball and the Pioneers took over on downs at their own 42-yard line. Less than a minute later, junior Carson Gonzalez got ahead of his cover and took a catch to the house for a 38-yard touchdown.

The two-point conversion try didn’t succeed, leaving the score at 33-0 with two minutes to the break. Jordan finally got on the board with a 38-yard field goal with under a minute remaining, but Lehi answered right back with a 2-yard rushing TD by senior Helaman Ofahengaue for a 40-3 lead at the half.

The Beetdiggers finally mounted a sustained drive to start the third period but didn’t get anything out of it, turning the ball over on downs at the Lehi 2.

This time it was senior running back Isaac Mills who managed to break free for a 41-yard rushing touchdown with two minutes left in the third to create a 46-3 advantage.

The defense provided the next points as junior defensive back Lance Olsen returned a pick 50 yards for the score to complete the Pioneer tally for the evening with 10 minutes remaining in the game.

The teams traded interceptions for the second time a bit later in the quarter, but neither team capitalized. Jordan finally got a meaningless touchdown with under a minute to play to account for the final score.

“We played really well and played to our level offensively and defensively,” said Lehi Coach Ed Larson.  “I was pleased with our effort and our execution; that was really good in all three phases, although we need to shore up our kick cover team a bit.

“Overall, I was very happy this week with the way the kids responded and played,” he continued. “I just felt like we executed the way we should have offensively. We’re finallystarting to play well in both the pass and run game.”

It was a solid team effort, but there were still a few players who stood out in the coach’s mind. “I thought Jackson played a really good game, especially in the first half making his reads and throws.

“It was Isaac Dayleys first game back after reconstructive knee surgery and he had a good outing,” Larson went on. “JaxonChristenson did well in both receiving and blocking. The offensive line is executing in the run game but still needs to get a little better in pass protection.

“On the defensive side, Kadiyon Sweat had another outstanding game,” the coach said. “He’s doing everything right for us right now.” Larson noted it helped that he had all his starting linebackers available for the first time in three weeks.

“Alta obviously has some momentum going right now after looking shaky early,” Larson said. “In the last three weeks they’ve put it together offensively. The return of the Kaufusi kidgave them a boost and their quarterback is doing well too. They took advantage of the turnovers against Orem.