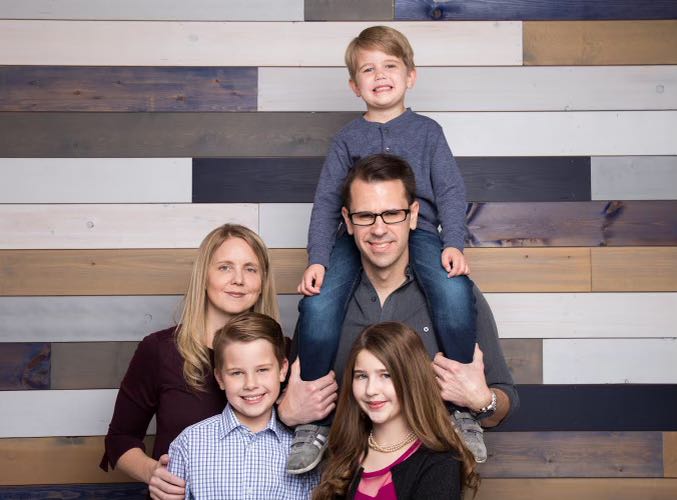 Lehi native Sue Smith Jackson and her husband, Greg Jackson, were caught doing yard work with their three children when they were approached to discuss their latest passions and achievements. It was evident the couple are devoted parents who were on their hands and knees showing their three children how to edge the lawn around the rocks in their yard. “We want to teach the kids to work hard. We often wish we had a farm,” said Greg. The scene belied the academic impact the two have had in their work as professors at Utah Valley University.

Greg started his academic career at BYU where he graduated with a degree in history. He went on to get a master’s degree in French. “Why French?” he was asked, “French is the second most used language in the world,” he answered. He completed his PhD in history at the University of Utah and was hired to teach in the Integrated Studies Department at UVU. “I am interested in many different fields and wanted to explore different dimensions of student learning,” he explained. “I felt that many involved in higher education used academic jargon that escaped many students. Many academics live in an ivory tower,” he said.

As podcasts became a popular medium for education, Jackson used his love and expertise in history to create his own series of podcasts called, “History that Doesn’t Suck.” Recently the podcast passed seven million downloads. “Podcasts have not always told the real facts. Some have been made without the rigors of real academia. Very few PhDs use the medium,” he explained. “My podcasts have been seen all over the world. Some American diplomats use the podcasts as ways to explain our history, culture, and policy. I start with a story about a historical figure like Patrick Henry. In telling his story, the facts about taxes, and policy can be taught in an interesting and accurate way.”

The History Channel has contacted Jackson and asked him toparticipate in a new Sunday night television series. The episodeswill explain the history of the transcontinental railroad, the interstate freeway system, Statue of Liberty, and the Golden Gate Bridge. “I have flown to New York to have the episodes filmed,” he said. Jackson is now working on a live show fashioned after his immensely popular podcasts.

When asked what he would like to see come from his work, he said, “Americans are subjected to a lot of disinformation. Right now, we are uniquely divided. We have always had our problems and we always came through. There have been manypolitical fights in history. Some even physical. We certainly can get through mean tweets. We just need a historical perspective.” Jackson believes smart people can understand more than one person’s perspective.

Greg Jackson currently serves on the Lehi City Planning Commission. He was appointed three years ago.

While Greg completed his academic work, Sue started her own career journey. Sue worked at Target while attending school. She was not sure what she really wanted to do until she took a class on women’s health. “The subject lit a fire,” she said. She went on to complete her bachelor’s degree in health, a master’s degree in public health and her PhD in Health Promotions. She was hired at UVU as a professor, and taught epidemiology for eight years. She was recently named Associate Dean of Health and Public Service at UVU. She has received UVU’s Board of Trustee Award, Outstanding Educator Award from the College of Health and Public Service, Faculty Excellence Award and Deans Excellence Award for Service, College of Health and Public Service.

During the pandemic, Sue was called upon to help UVU with its pandemic protocols and response. She expressed urgency in getting enough healthcare professionals to care for the growth in Utah Valley. “We need people to take care of us all. We need new programs to address the health needs. I would like to see “stackable pathways.” We want to see students through, from certificates to graduate programs. Our health care system is overwhelmed. We need more people than we can produce. We also need better coordination in the valley. We need to assure quality by providing good clinical experience and we also need more options for ancillary services.” She went on to express the fact that many students in high school do not know the host of options in health careers that are available.

Sue beams as she talks about her three children. “Sometimes it is hard to balance my work and being there for my kids, but I think it is good for our kids to see us succeeding and being very passionate about somethings.” She went on to explain that being busy has taught our kids to be self- reliant. “My son taught himself to make a breakfast burrito,” she laughed.

Sue is the daughter of former Lehi Mayor Ron Smith and the late Kay Smith.

The passion and dedication to their family and professions are evident talking to the Jacksons. They manage to provide a place of love and support not just at home but in the halls of academia at Utah Valley University. This is just the beginning of a tradition of excellence and influence that will reverberate around the area for many years to come.