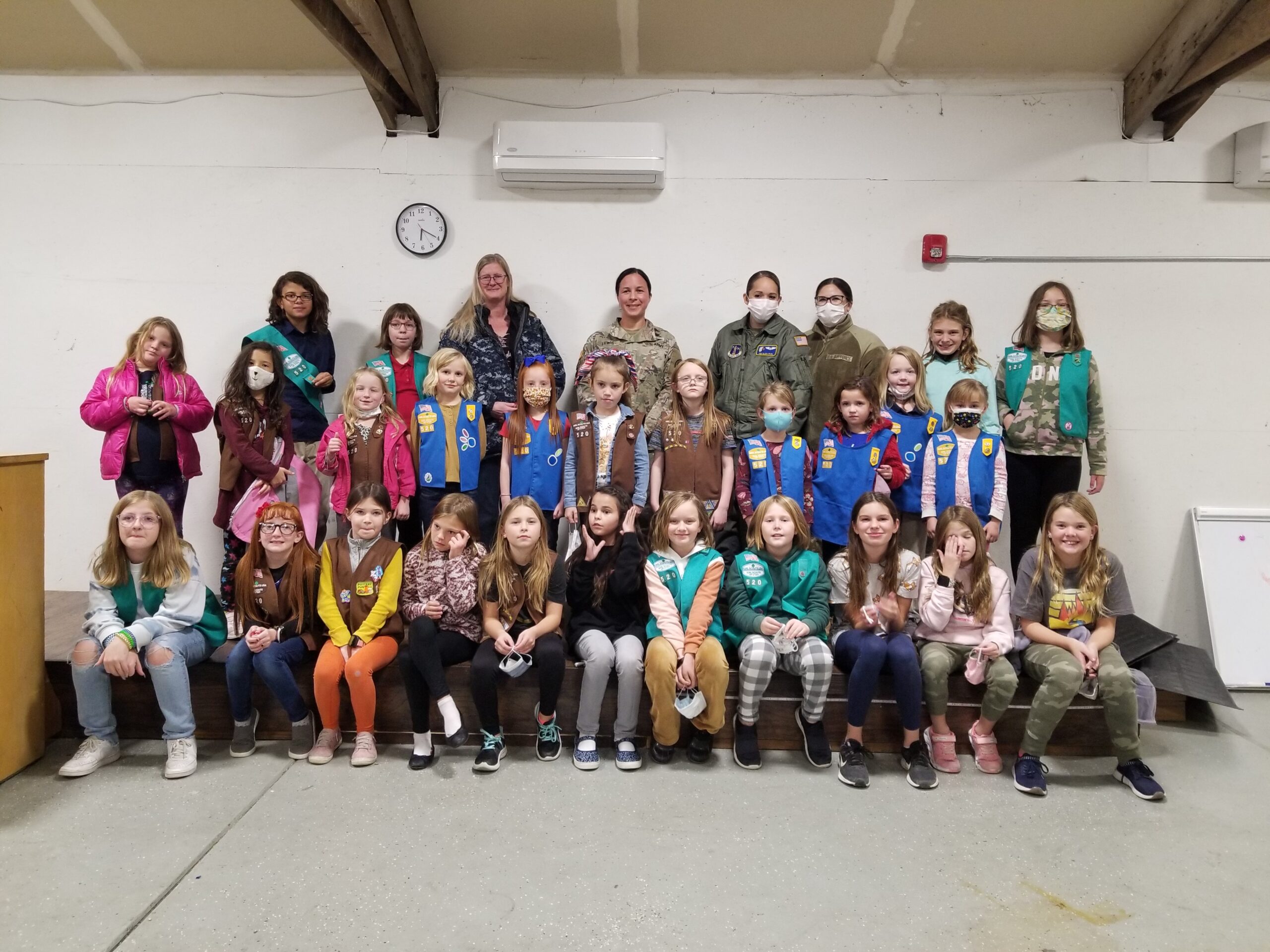 Lehi’s Girl Scout Troop 520 held a special activity on Veteran’s Day to learn more about women in the military. “Science and math are your friends,” the Air Force pilots told the young girls. “And don’t let anyone tell you ‘no.’”

“Girl Scouts is all about teaching girls to be leaders and gain self-confidence while letting them experience fun new activities and interact with as many of the incredible women in our community as possible,” said troop leader Abby Hansen. She appealed to the community on social media weeks before Veteran’s Day and found four women who currently serve or have served in the Armed Forces to speak to Girl Scout Troop 520–two Air Force pilots, a retired Navy officer, and a woman in the Army.

In 2014, Troop 520 started out with five kindergartners and two leaders. Now they have 39 girls and 14 leaders, ranging in age from six to 12. “Some of our girls have been with us throughout elementary school,” said Hansen.

For the Veteran’s Day activity, the troop split into three groups and rotated rooms every 20 minutes to listen to the presentations. The youngest girls listened closely as Air Force pilots Margaret and Rosie (names have been changed for security reasons) described their jobs.

“I fly refueling jets. They’re the size of a bowling alley, so we could have a bowling alley in there if we wanted to,” Margaret explained. The aircraft can hold up to a 135 thousand pounds of fuel. “A lot of what we do as the National Guard is humanitarian. We were just in Africa where we dropped off a bunch of doctors and supplies.”

Rosie flies C130 cargo planes. “I knew I wanted to be a pilot since I was your age,” Rosie began. “I was told I could never do it because I wear glasses. Someone told me I should go for it,and I found out that for certain aircraft having perfect eyesight isn’t a thing anymore. I didn’t even need a waiver.”

“I have terrible eyesight – I just got Lasik and it wasn’t an issue. I started out as an administrative assistant in the Air Force. I stayed in a job I hated for a long time because I didn’t think I could be a pilot. Like Rosie, someone encouraged me to go for it and I’m glad I did,” added Margaret.

The young Girl Scouts wanted to know about the scariest situation the two pilots had encountered.

“The scariest flying situation was in [a refueling operation] over Afghanistan because I couldn’t see my receiver and he couldn’t see me. I just had to pray and hope he was there and that I didn’t hit him,” said Margaret. She had to lay down on her belly and fly backwards.

“I’ve been in scary situations that I can’t talk about,” said Rosie. When she was at Aircraft Commander School, she was on acheck run and was dropping equipment in formation. “We went to close our manual doors and I guess there was a pinhole in the hydraulic line, so it started dripping and all the sudden exploded.”

She remembers putting on uncomfortable masks that make them all sound like Darth Vader to keep the hydraulic fuel from getting into their lungs. “Everyone was panicking a little bit, so we were breathing harder, too. That was a scary situation, but luckily the weather was good, and we were able to get back to the airport safely,” Rosie recalled.

All the military women said they loved science and math when they were in school.

One Girl Scout asked what they would do if they were about to crash. “We don’t carry parachutes on our jets, but we can fly with one engine,” answered Margaret. “A couple of months ago we lost an engine, which was scary, but we were able to land by doing math and calculating how much thrust and how much power we needed from one engine to offset the loss of the other engine.”

Rosie and Margaret were two of only a handful of females doing their jobs when they first started out, but there are more women in the military now.

Over the years Troop 520 has had amazing women, and a few men, share their experiences and talents with the girls. They’vecamped inside Yellowstone, visited the Grand Tetons and Capitol Reef, slept in sleeping bags on the floor of a gymnastics studio and stayed overnight in a haunted cabin. “We’ve visited nursing homes, collected food and toilet paper for a shelter, and learned how to properly retire American flags. We’ve gone snowshoeing, hiking, practiced yoga, and tried Taekwondo,” added Hansen.

“There are so many highlights. I am very proud of our troop and all the amazing girls and leaders who have been part of it over the years, and I especially love the chance to spend time with my two daughters. I can’t think of anything better than having your own Girl Scout troop,” said Hansen.