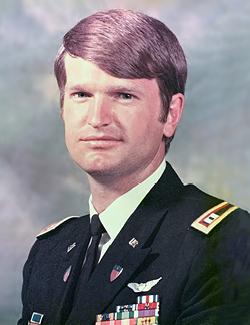 On Nov. 17, former Lehi resident and Vietnam veteran, Jim Stein was inducted into the prestigious Army Aviator Hall of Fame held in the Von Braun Center, Huntsville, Alabama. The following tribute was read at the induction ceremony:

​“Capt. James E. Stein, Retired, is the epitome of an Army Aviator. Following his graduation from Army Flight school in 1969, he found himself in Vietnam with the 335th Assault Helicopter Company, “The Cowboys.” During his 21 consecutive months flying UH-1 “slicks” and the Bravo gunship, assisting U.S. troops in contact, he provided life-saving support.

​Returning to the U.S. and graduating from the OH-6 Cayuse Course, he went back to Vietnam in 1972, assigned to the 7th Squadron, 17th Cavalry Regiment, “The Ruthless Raiders”, flying scouts as “Scalp Hunter Lead.” He volunteeredto be at the very front lines, flying low and slow to be in position to render assistance, call in artillery, recommend B-52 Arc lights and evacuate the wounded, which he did many times.

​On June 19th, 1972, he was shot down for the tenth and last time. During an operation northeast of Kontum, while scouting an enemy bunker his OH-6 “Loach” came under heavy fire. Both he and his observer were wounded, him in the right knee. He maneuvered the “Loach” without the ability to use the pedals due to his injury and safely landed with help from his observer, passing out immediately after landing.

​His many awards and decoration speak to his valor and commitments: two Silver Stars, four Distinguished Flying Crosses, two Bronze Stars, 94 Air Medals, two for valor, the Purple Heart, and the Vietnamese Gallantry Crosses with Gold and Silver Stars.

​Legendary aeroscout pilot, CPT (Ret) Jim Stein is the epitome of an Army Aviator. He is the personification of bravery, skill, selfless sacrifice in devotion to duty—duty to his country, to his unit, and to his comrades. His deeds serve as timeless examples for the generations of Army Aviators that follow.”

Stein retired after nine years in the U.S. Army and is now a PGA golf official, chairman of three national amputee golf tournaments and U.S. Handicap Ski Program as well as a U.S. Ski Team official. Jim and his wife, Susan live in Novato, California. He says, “ No matter where I live Lehi will always be my home town.”