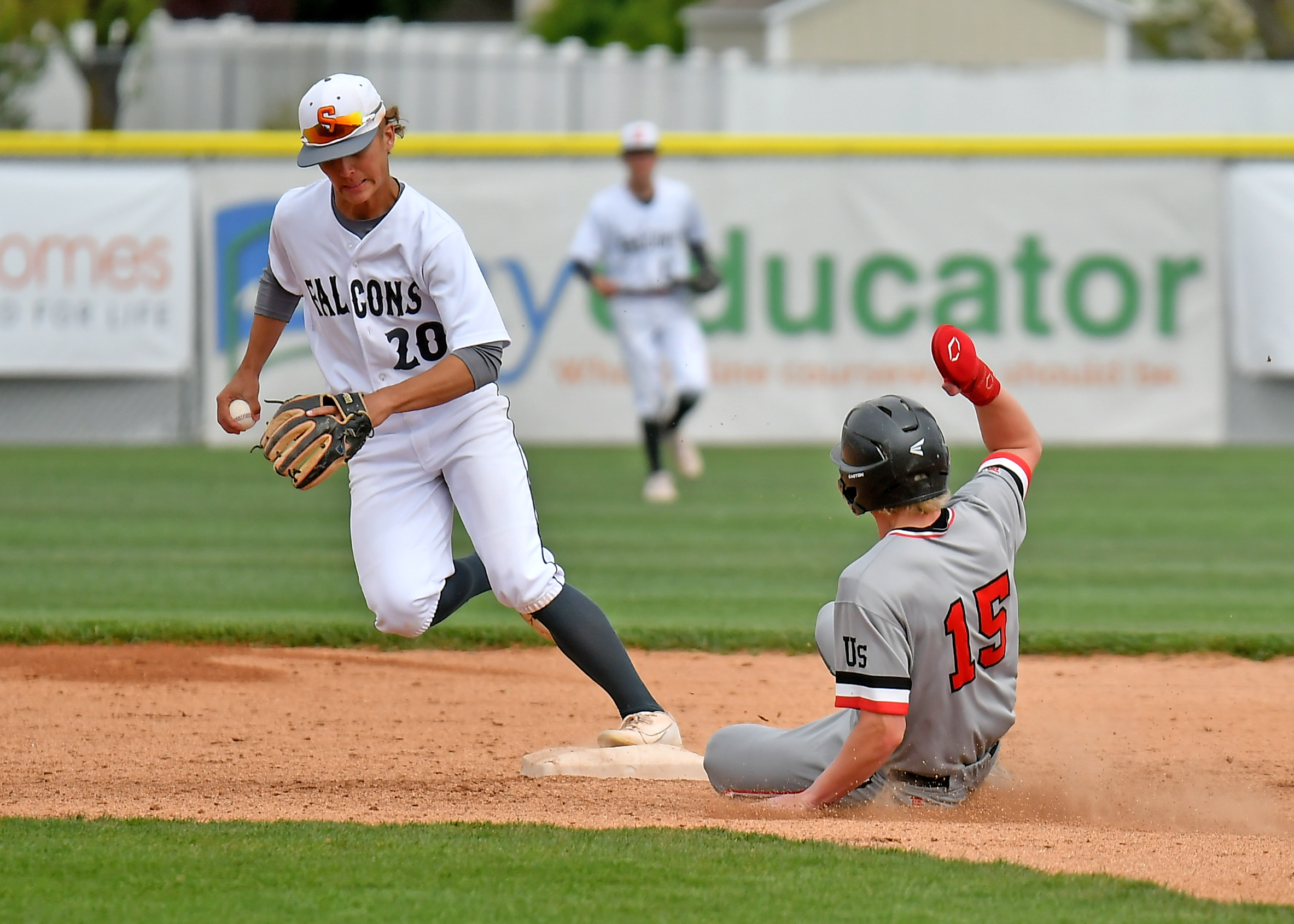 The Skyridge baseball team continued to struggle with the tough Region 4 lineup but ended the regular season on a four-game winning streak, including an exciting victory over American Fork, to secure fourth place in Region 4 at 7-8 and with a 15-10 mark overall.

The Falcons missed the cut for a bye in the first round but did move up to #10 in the final RPI rankings because of the strength of their competition. They drew a best-of-3 series with #23 Westlake (4-21), the final league opponent that they had just defeated three straight times, to begin the first round.

The teams split the first two games, but Skyridge prevailed in the tiebreaker to advance to the Super Regional round. Teams were reseeded for the next phase, and the Falcons are now matched with another familiar opponent, #7 Pleasant Grove (16-8), the third-place team from Region 4.

When these programs met during the regular season, Skyridge won a tight first game at home but lost the next two.

This time, the best-of-3 series will be hosted by the Vikings beginning on Thursday (May 19) at 4 p.m. The second game is scheduled for Friday at 1 p.m., with the tiebreaker to follow at 4 p.m. if necessary.

The Falcons took an early 2-0 lead in the top of the first, but the Knights responded with three runs in the bottom half and never trailed again. Junior pitcher Tyler Ball took the loss with senior Matt Houseman and junior Tyrone Evans also making appearances on the mound.

Junior Dalton Young had a home run and a single and scored twice. Sophomore Ike Pickle made the other run.

In the second game of the series, the Falcons got an early lead again but lost it in the third inning and never got it back. Senior Nick Holland tallied the loss as the starter with senior Jarrin Kalama and junior Tytan Tate throwing in relief.

Pickle doubled in two runs. Sophomore Isaac Johanson had two hits including a triple and scored once. Pickle drove in two runs, Young scored twice from walks and senior Colby Carter had an RBI.

The Falcons led 7-5 going into the bottom of the seventh inning but couldn’t hold the lead as the Knights plated three runs to snatch the win. Carter threw five innings and reliever Houseman got the L.

On the other side of the plate, Carter went 3-for-4 with an RBI. Pickle and senior Teagan Calton each contributed a solo home run and Calton also came across following a walk. Senior Seth Norton had two hits including a double, driving in two runs and scoring once.

The Falcons led for a portion of this game but the Cavemen scored five runs each in back-to-back innings to pull away for good. The loss was charged to Tate with Kalama and junior Gavin Bauer appearing in relief.

Pickle had two hits including a triple and scored twice. Carter rapped out two singles and came across once, while Ball drove in two and senior Seth Norton had a double and a run.

The Falcons weren’t able to get the bats going as Calton and Pickle had the only hits. Ball got the loss with senior Stockton Salcido, Johanson and Bauer making appearances.

The Falcons defeated the top-ranked Cavemen with a dramatic late-inning rally. Skyridge trailed the entire game until plating five runs in the bottom of the sixth and slamming the door shut in the top of the seventh to get the win. Carter went the distance on the bump.

He also had a nice afternoon at the plate, going 3-for-4 including a double with an RBI. Pickle had two hits and scored twice, Dalton doubled in a pair and also made a run, Ball hit twice for an RBI and a run scored and Calton singled and doubled with an RBI.

On the road, the Falcons scored runs in each of the first four innings to build an insurmountable lead. Houseman got the win with Norton and Tate as relievers.

The visitors sent 17 players to the plate in this outing. Young doubled twice for an RBI and two runs, while Carter singled and doubled with an RBI and scored twice. Calton had a home run and also another score while Johanson made two hits and Ball drove in two runs.

Ball threw a no-hitter and allowed just one baserunner with a walk as he retired the Thunder in five innings. It didn’t hurt that seven Falcons crossed the plate in the bottom of the first to provide a comfortable lead.

Kalama drove in four runs with a pair of triples and also scored once. Houseman had two hits including a triple, two RBI and two runs scored. Senior Mace Moen had a pair of RBI and Ball scored twice.

After two scoreless innings, the Falcons boarded six runs in the top of the third and went on to the big victory from there. Carter was the winner and also had a double in the game. Calton drove in six runs and Ball three as both of them plus Norton had home runs.

A Norton three-run homer in the third inning gave the Falcons all the runs they would need to win this outing. Houseman gave up no runs on two hits to get the victory, fanning seven with two walks. Kalama finished it out on the mound. Pickle and Young each had doubles as Ball and Calton had triples.

A solo homer by Calton gave the Falcons an early lead in this back-and-forth contest, but the Thunder tied the game in the fifth and took the lead for good in the sixth. Lewis got the loss but Ball and Carter also pitched in this one. Holland had a pair of hits.

The Falcons bounced back with a shutout in the tiebreaker, scoring all of their runs in the fourth inning. Holland notched the win by scattering three hits and striking out eight with one walk. Tate was the closer and issued one walk with no hits.

Johanson singled in two runs to start the scoring spurt, then Kalama followed up with a three-run homer to account for the rest of the margin.