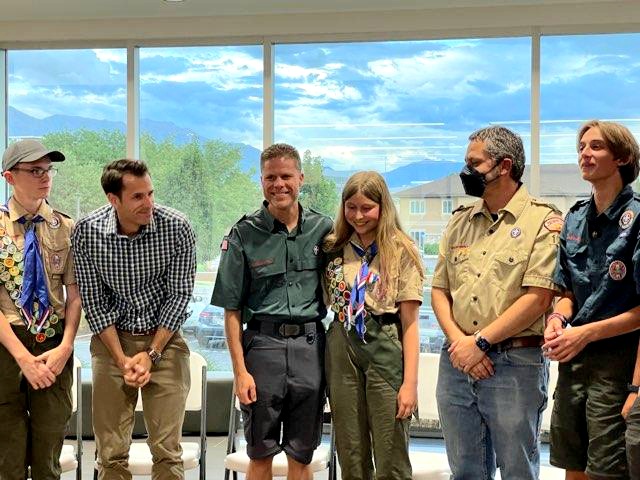 “The moment that took me by surprise was the moment she joined the Eagles’ Nest. I still cannot find the right words to describe the experience of watching a group of male Eagle Scouts rise to their feet and clap as a teenage girl joined their ranks,” said Rachael Hutchings of her daughter Savannah.

The Lehi Scouts BSA Troop 799 held a Court of Honor on Saturday, August 13, for one of the first female Scouts to earn the Eagle rank–Savannah Hutchings.

Beginning January 1, 2020, The Church of Jesus Christ of Latter-day Saints ended its century-long partnership with the Boy Scouts of America. The number of registered Scouts in Utah went from 400,000 to 7,000, and the BSA has made radical adjustments to its programs. Angela Walker started Pack 799, which grew into Troop 799 as more youth joined. Boys and girls in Lehi who love scouting and want to keep going in the program have found their way to community troops like Troop 799.

The BSA, now officially “Scouts BSA” because of a trademark on Scouts of America by the Girl Scout organization, began including young women in February 2019. Savannah Hutchings joined an all-girl pack in Troop 799 in 2020. The handbook for boys and girls in Scouts BSA is the same except for the pronouns.

Savannah described her participation in Scouts and the effort to earn her Eagle saying, “It was a difficult, yet amazing experience. It changed my life by giving me a place to belong and a way to try things that I didn’t even know existed.”

“I grew up watching my Scoutmaster dad and my two brothers, who both achieved the rank of Eagle Scout, participate in Scouting, and I was jealous,” recalled Rachael Hutchings, one of her daughter’s pack leaders in Troop 799. “Having the privilege to witness my daughter and other female scouts walk a path that so many girls before them could not then watch my daughter achieve the rank of Eagle Scout has been inspiring.”

“Your final obligation as an Eagle Scout is to have vision. As a leader, you must now blaze your own trail,” said Savannah’s father, Nate Hutching, during her Court of Honor. “You’re in a unique position – you’re a pioneer as a female Eagle Scout, accomplishing what many women wish they could have done. You are blazing a trail for girls who will follow you. As one of the first female Eagle Scouts, many will be watching what you do.”

Savannah’s fellow Scouts remembered their favorite moments with her at campouts and during service projects before a slideshow presentation featuring photos of the all-girl Pack hiking through deep puddles in the rain, wearing masks at different service events in 2020 and 2021 and helping Savannah make chew toys for animals at the Humane Society for her Eagle Project.

“Savannah is special to me. She has mentored my daughter, the youngest member of our female scout troop, who wanted to join because of Savannah. She’s a great example and leader,” added Jodi Meredith, Advancement Chair for Troop 799. “Camp Hunt changed Savannah – she had more confidence and became our troop leader after that camp. Savannah, it is my honor to present you with your Eagle Award.”

“Let the practice of a daily good turn become a lifetime of service. Only by giving of yourself do you get anything of value,” Nate Hutchings concluded.