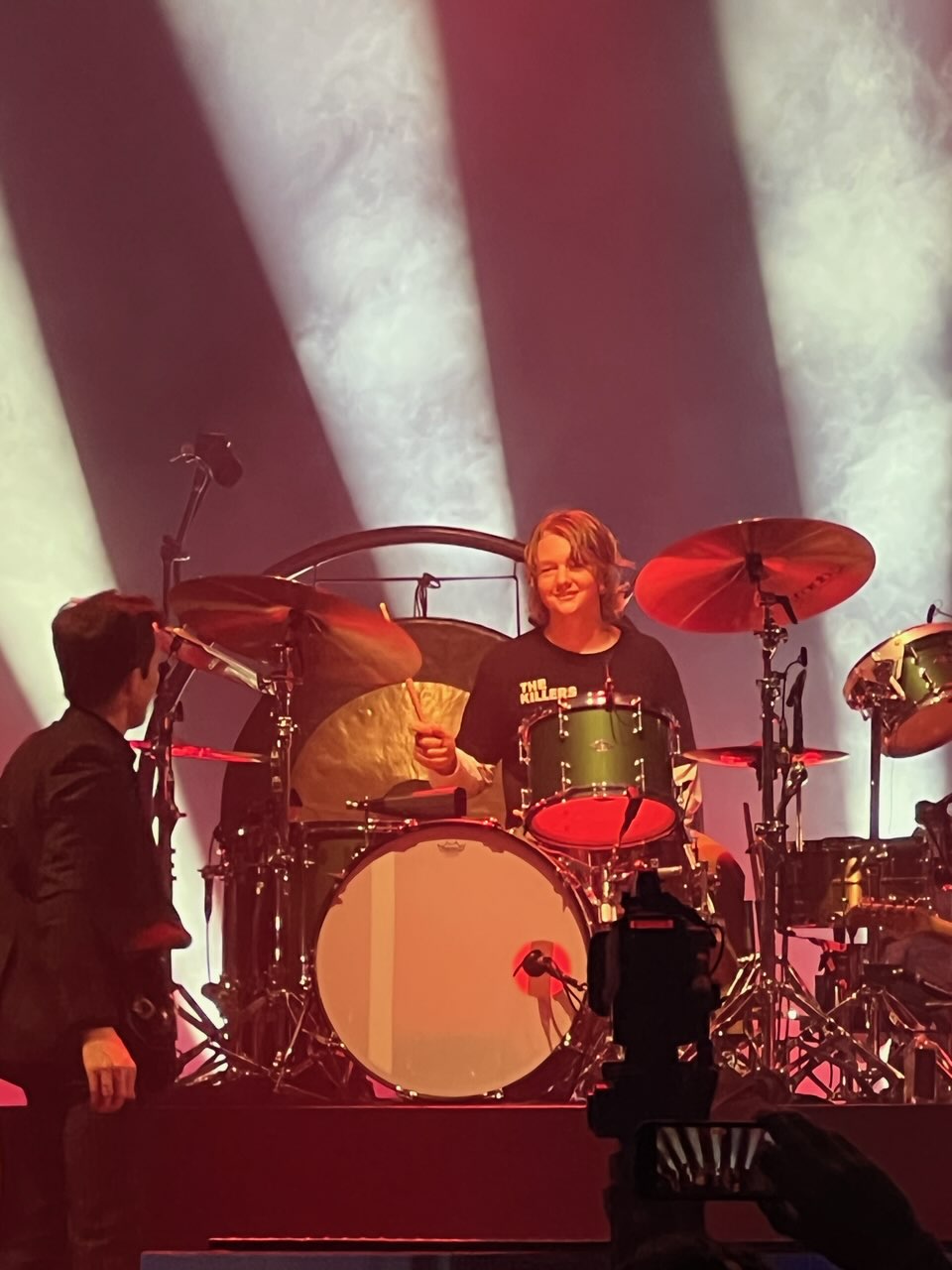 “Are you ready for this?” Brandon Flowers, frontman for the band The Killers, asked Alec Andersen as the two stood onstage at Vivint Arena Tuesday, August 30. The 18-year-old Skyridge senior nodded, then headed to Ronnie Vannucci Jr.’s seat at the drums to fulfill his dream in front of 20,000 screaming fans.

Years ago, The Killers spotted a young man in the audience at one of their concerts holding a homemade sign, “Me + Drummer = Reasons.” The fan was referring to The Killers’ song “For Reasons Unknown,” and the band started a loose tradition of inviting drummers to play with them for that one song. Alec Andersen has spent hours studying and practicing the live version of “For Reasons Unknown,” but that didn’t mean he’d get onstage.

“They haven’t done that song for the last three concerts, so it wasn’t a given. It was getting late in the setlist, and they hadn’t noticed the sign because they never turned on the house lights,” said Eric Andersen, Alec’s Dad. “It was really Alec’s younger brother holding the sign up and strangers shining their flashlights on it that made Brandon notice.”

“We’ve been trying to resist having drummers come up,” Brandon Flowers said into the microphone at the Tuesday night concert. “Do you know the song? Are you at least from Utah? Okay, come up.”

A security guard led Alec to the stage, where Alec met two of his idols, Flowers and Vannucci, before taking a seat behind the drum set. From the first beat, the crowd was electrified. Flowers sang through a wide grin, with Vanucci pointing appreciatively at Alec.

“I think they always cross their fingers that the person they call up will be good,” said Alec.

“Do you have a strong right leg?” Flowers asked Alec before a key point in the song. Alec nodded, his blond hair illuminated by stage lights. “Give the people what they want,” Flowers continued. Alec responded by stomping the bass drum beats.

“He was really in his element on stage,” said Jonnie Andersen, Alec’s Mom. “It was a proud mama moment for me. As a parent, you just want to see your kids happy – it was a very tender moment.”

Right before the COVID-19 pandemic shut everything down, the Andersen family experienced the death of a close loved one, and Eric was in a mountain biking accident and was life-flighted to the hospital while Alec watched. Both of those experiences took their toll on the Andersen family, including Alec.

“Music has been an escape for Alec. He kind of pulled away from everything else,” remembered Jonnie. “We’ve been praying for him to have a win.”

“This feels like a turning point for me. I’ve been feeling down for a few years, but now I’m ready to take on my senior year and commit to always moving forward,” said Alec.

When “For Reasons Unknown” was over, Alec stood behind the drum set, took a selfie, then hopped to the front of the stage with Flowers and Vannucci, who posed with Alec for another photo. “We were so happy – we killed it,” Alec concluded.