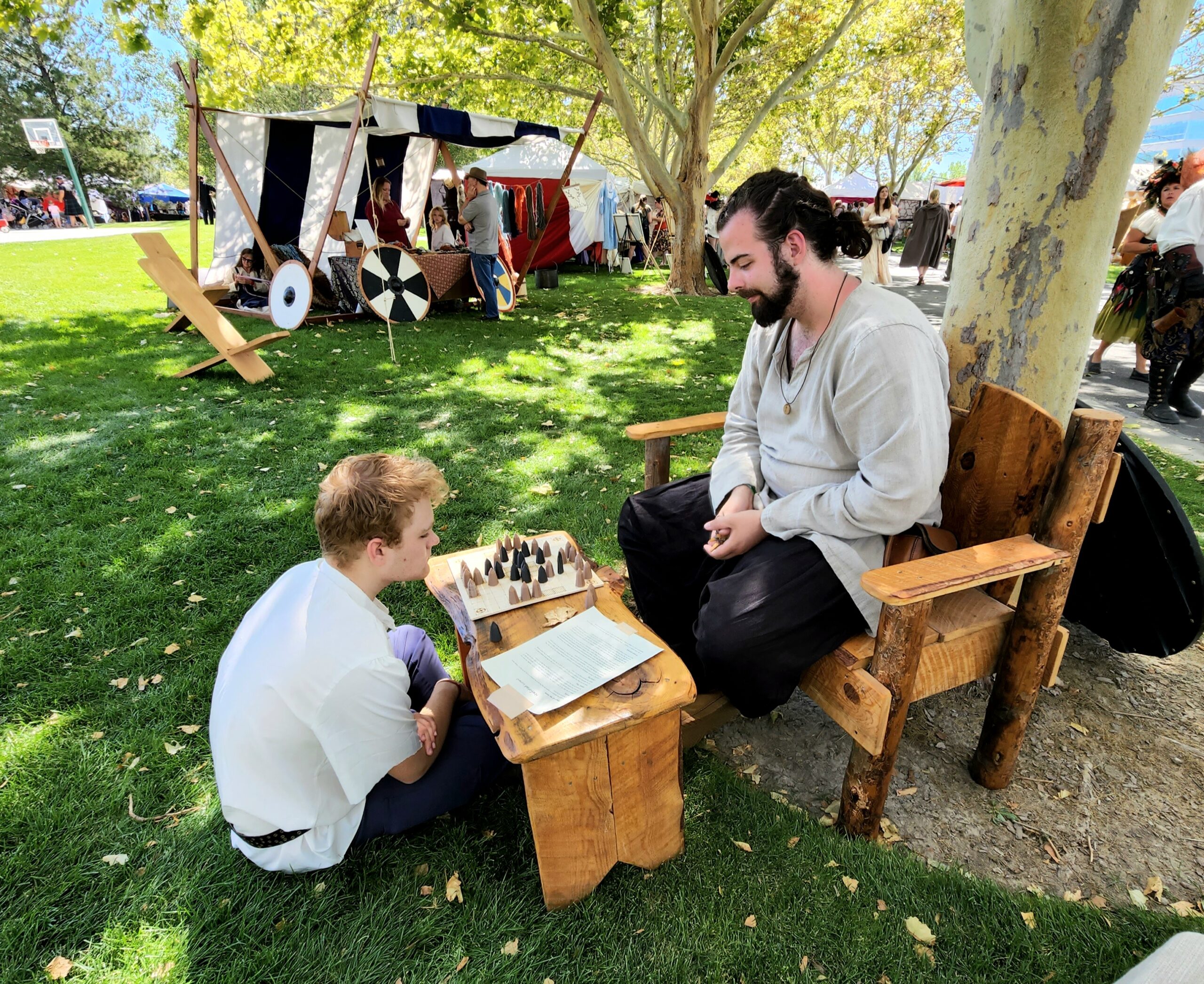 Thanksgiving Point’s Electric Park was surrounded by hundreds of knights, maidens, pirates and fairies waiting to enter the annual Utah Renaissance Faire on Friday and Saturday, August 26 and 27.

Members of the Viking Historical Group of Utah set up camp and demonstrated crafts and games. Jason Schaat sat in front of his cozy tent carving wood with hand tools. “I’ve always been interested in arts and crafts and my Swedish and German heritage,” Schaat explained. He recently moved to Sandy from Seattle, Washington, and was happy to find the Viking and Renaissance community in Utah. “Everything about what I do is art. I really like introducing this to kids. My 14-year-old son came last night, saw everything, and asked for the first time if he could learn more and start carving.”

“We’re here to have fun – we love this stuff,” said the father of two small pirates. “My boys have always loved pirates, and we had a great time last year. Everyone is so nice here. It’s such a unique, fun thing.”

“He’s the captain, and I’m the first mate because he’s got the keys,” explained five-year-old Ayden gesturing to his big brother Grayson who produced an ancient-looking ring of keys hooked to his belt. The brothers sat in Jason Schaat’s handmade Viking chair and posed for photos with Schaat’s sword.

Kim Gardner and her son Braydon also attended the Utah Renaissance Faire with the Viking Historical Group of Utah. Kim demonstrated different wool working arts like lucet and nalbinding, a precursor to crochet and knitting, at her booth, and Braydon had Viking board games on tree stumps tempting fairgoers to learn and play. Kim is the chairperson of the Colonial Festival, where she met members of the Viking group and learned more about nalbinding and lucet. “I love learning new skills and teaching people about this art,” said Kim.

Several quests were available for kids and adults to find the Royals’ favor. People could win prizes by throwing a battle axe at a charging knight or visit with fairies and sea nymphs. Two pirate ships were crawling with little pirates in the park as well.

“It’s always fun to see the booths and how creative people are. The kids love climbing on the pirate ship,” said Laurel Keller. Keller and her daughter Madison and son Spencer dressed in pirate costumes, and Madison bought a drawstring bag from a fairy.

“I’ve always been fascinated with Medieval culture. We love the jousting and sword fighting. It’s fun to dress up and experience everything together,” said Paul Casey with his wife Leanne and son Connor.

The Utah Renaissance Faire celebrated its tenth anniversary with the sold-out event in Lehi. “Truly, we want to thank everyone for supporting this Faire. It is run by an incredibly small team on nearly all volunteer hours. It’s truly a labor of love, and we’re so happy that so many get to enjoy it,” commended organizers on social media.