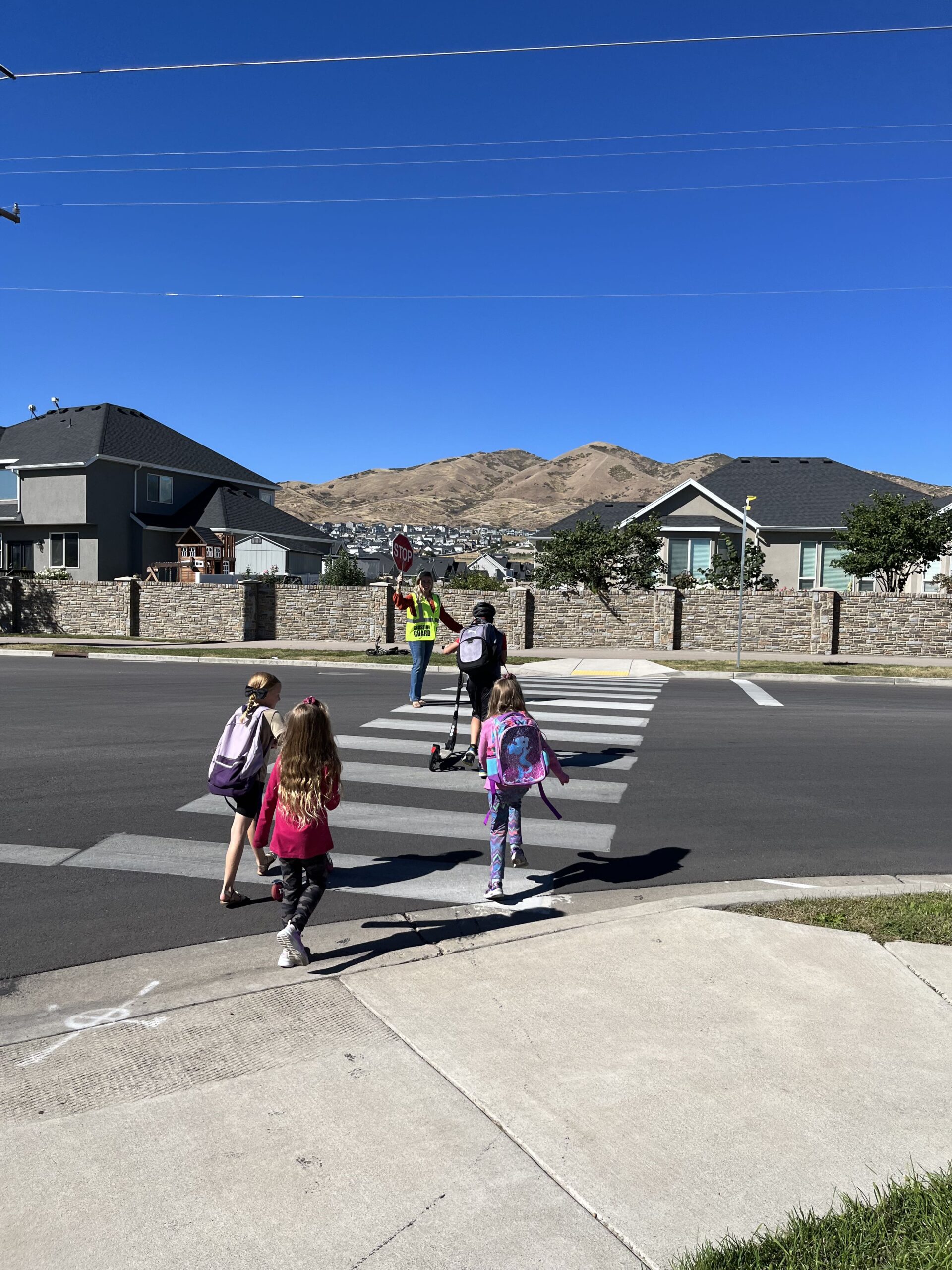 On Wednesday, September 7, Lehi mother, Marjorie Johnson’s neighbor, called her and said that Johnson’s sixth-grade daughter had nearly been hit by a car on her way to school. Johnson decided it was time to take steps to assure children could walk to and from Eaglecrest Elementary safely.

She acquired a crossing guard vest, and Eaglecrest Principal William Shoemaker loaned her a stop sign. She stationed herself at the 3200 North and 300 West intersection to guide children safely across the busy street.

According to Johnson, she had contacted Lehi City multiple times in the last few years to complain about the safety of neighborhood children crossing the road to get to school.

“Drivers don’t stop at the intersection. They regularly run or roll through the three stop signs and drive at speeds up to and exceeding 40 MPH on the posted 25 MPH road,” said Johnson.

After Johnson expressed her concerns to Principal Shoemaker, he stationed himself at the intersection and reported that during a brief time, he had witnessed sixteen traffic violations.

“What will it take to get a crossing guard at this intersection?” she said to Luke Seegmiller, Lehi’s public safety administrator. He had reported to the intersection and reprimanded Johnson for taking matters into her own hands. “Seegmiller asked me to take off my vest, put down the sign, and stop impersonating a crossing guard,” she said.

“Crossing guards are employed by Lehi City and have been vetted with background checks and training. It’s important that people are not misrepresenting themselves as City employees. We appreciate parental help, but that doesn’t take the place of proper training and safety protocols,” said Cameron Boyle, Lehi City Assistant City Administrator.

According to Johnson, the intersection has been a problem for some time. Eventually, three stop signs were installed to slow down traffic.

“With the increased number of homes being built in the area, stop signs are just not sufficient. I have seen adults drive while using their phones, driving too fast and not paying attention to the children walking to and from school.”

When asked if Skyridge students were part of the problem, she defended students, saying, “Students are careful and drive cautiously. It is the adults who are the biggest problem.”

“I have seen other areas with problems concerning students and their safety getting to and from school. Students who live on the south side of Timpanogos Highway are also at risk because they must cross the busy highway to attend Viewpoint Junior High. A sky bridge is necessary if students are to be safe. It doesn’t have to be a fancy bridge, but something that will keep students safe. City planners need to be forward-thinking,” she said.

After Johnson’s conversation with Lehi City officials, they authorized a crossing guard at the intersection. On Monday, September 22, an official Lehi City crossing guard will be present to guide the children safely across the busy street.

“Sometimes you just have to take matters into your own hands,” said Johnson.