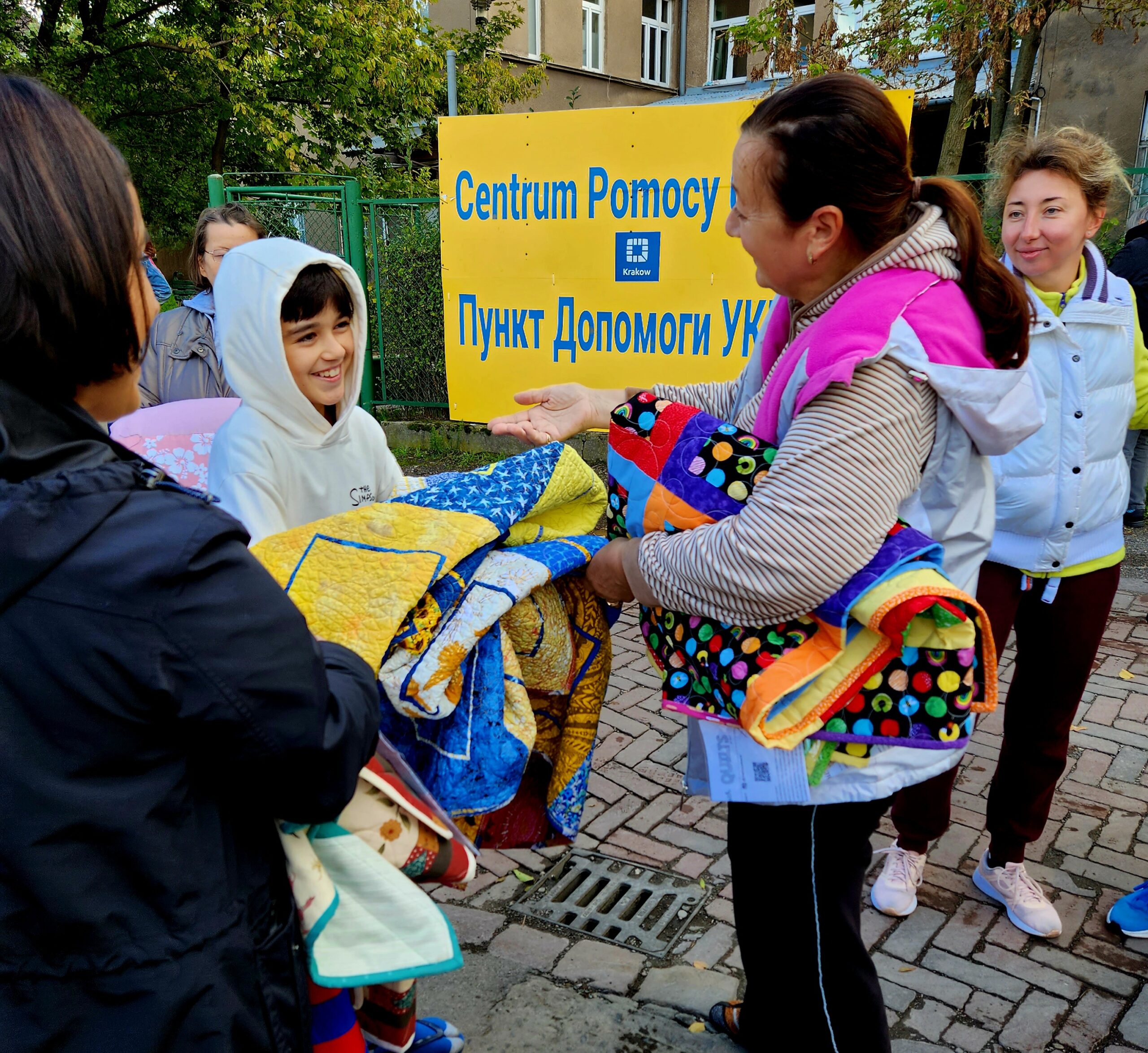 A group of 35 Americans traveled to Krakow, Poland, last week with Wrap Ukraine With Quilts teaching Ukrainian refugees to sew simple projects and quilts. The volunteers organized a permanent sewing workshop to make and give away more quilts.

“Today was amazing for them. One woman told me it was the first time she hadn’t thought about the war since it started,” Tetiana Ashley, a quilter from Ukraine who has been living in California for the last 12 years, told us. “It was therapy for them to get to sew,” another woman said. “You are bringing us back to life.’”

Since March, Lehi’s Gina Halladay and her friend and business partner, Beth Hawkins, have been collecting quilts and delivering them to refugees from Ukraine. Gina’s husband, Hal Halladay, has traveled to Poland three times since the project began, making unlikely contacts with strangers who are now friends and expanding the mission of the newly-formed non-profit, Wrap Ukraine With Quilts.

“So much of this journey has been about invitation, trust and gratitude,” said Hal Halladay. In May, Gina and Beth hatched the idea to create a sewing workshop in Poland. They invited quilters who have been following their journey on social, newspaper and television stories, and the 31 spots were filled quickly.

Janene Comer learned about Wrap Ukraine With Quilts from a story in the Lehi Free Press, then met Gina at a Salt Lake City quilt show. “On a personal level, I was looking for a service opportunity and thought it would be good to donate a quilt,” saidComer. She is a producer on the BYUtv series “Making Good”with Kirby Heyborne, and Wrap Ukraine With Quilts appealed to everyone at the show, but they needed an event to film. After meeting Gina in person, Comer offered to do the accounting for the new non-profit (which will soon be rebranded Wrap the World With Quilts), and Comer’s husband donated office space for the hundreds of quilts that are still coming in every week to Gina’s home in Lehi. Comer, Heyborne and the crew of “Making Good” were part of the group of Americans in Poland serving Ukraine refugees last week. They filmed an episode of the show overseas while they were there.

“What surprised me was that it wasn’t so much about giving away quilts or teaching women to sew; it was making heartfelt connections,” said Comer. “It wasn’t words; it was feelings. For me, it turned from us giving to them into receiving from them this special connection.”

“The film crew said the best part was seeing the Americans interact with the Ukrainian women, teaching them to sew. He[Heyborne] said it was just a blend – he couldn’t tell which ones were Americans and which were Ukrainians. Everyone was smiling. That brought the whole message together,” said Beth Hawkins at the end of our week in Poland.

“We came to Krakow to deliver quilts to women and children living as refugees, to teach sewing skills workshops, to set up a sewing center and to make quilts with women while here,” said Tamara White, a quilter from Massachusetts. “We left so much more enriched and blessed by what was given than by what we offered. My heart is overflowing. Some of that is with love and compassion, but it’s also with the aching that comes from awareness and witnessing pain, weight at wanting change and relief, and desire to do more.”

Chef Harry Parwani, founder and director of Chervona KalynaCharity, offered Hal use of the space in a building where he prepares meals for thousands of refugees every day. Parwanieven fed the Americans during the sewing workshop days. He taught Americans how to make Polish dumplings in his kitchen and came along with the group when they handed out quilts. Parwani was a refugee as a child, and serving Ukraine refugees is a calling for him.

“Harry is at the point in his life that he’s thinking about having a family,” Hal Halladay told the group at our farewell dinner. “He said when he was a boy, he got an idea of what Americans were like from TV shows or movies. He gestured to you sewing and talking with the women and giving away quilts and said, ‘This is what I believed America was. It gives me so much hope. I want to raise kids that are like these people.’ That’s a great compliment.”

Junie Tomshack, a Utah quilter, shared her experience at the refugee center. “This morning, I saw a woman with my mother’s Jazz quilt. I had set it behind me, and she asked if she could have it. There was someone there to translate so I could explain that it was my mother’s, and we both started crying. She picked it out for her son. A few minutes later, she returned with her son to meet me. I can cry every time I think about that – it was a great experience,” said Junie.

“I feel like we accomplished what we came here to do. The dust hasn’t really settled for me. My emotions are high. It never really turns out how you might have envisioned it, but the result was beyond what I thought it would be,” said Gina Halladay at the farewell dinner.

Wrap Ukraine With Quilts is still taking quilts and donations to help with shipping costs and supplies for the sewing centers in Sosnowiec and Krakow, Poland. They will be taking another group of American quilters, or those willing to assist in other ways, in Spring 2023.