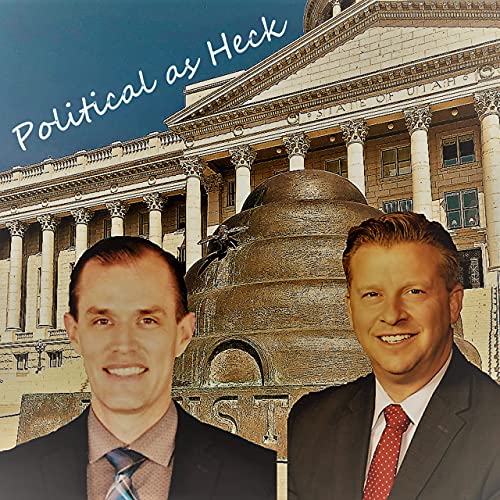 Lehi resident Corey Astill felt a need for a podcast focusing on Utah state politics and decided to fill the niche by starting the podcast “Political as Heck.” In 2020, he was living in Fairfax County, Virginia, and when his kids’ schools shut down, Astill and his wife, Eileen, decided to move their family back to Utah. They eventually made the temporary move permanent and purchased a home in Holbrook Farms.

“We chose Lehi after deliberate research. We wanted an up-and-coming place with young families. We wanted to return to Utah County after my time in college [at UVU and BYU]. Lehi is now the economic engine of Utah and is the perfect center of gravity between Provo and Salt Lake City,” said Astill when asked how he ended up in Lehi after being born and raised in West Salt Lake County.

After settling back into Utah life, Astill had the idea of starting a podcast on Utah politics after running a successful podcast with thousands of followers called “Conservative Minds,” focused on exploring the people and ideas focused on conservatism. While his original podcast had a national identity, Astill wanted his newest venture to be Utah-specific.

He had been a listener of Utah State Senator Todd Weiler’s “ToddCast,” where the Davis County politician discusses the current legislative policy on Utah’s Capitol Hill. While the “ToddCast” podcast focuses more on legislative happenings, Astill felt there was a lack of conservative content and dialogue for Utahns to consume and decided to start his own.

“I reached out to Todd in the Spring of 2021 and asked to buy him lunch. I told him I wanted to start a Utah-focused political podcast and asked if he knew anyone who might like to do it with me. He said, “yeah, how about me?” And, of course, I was delighted to hear that he was interested because he’s a prominent political official in Utah. That’s how we got started. Several weeks later, we recorded our first episode in July of 2021,” said Astill on how his partnership with Weiler came about.

The duo of Astill and Weiler brings plenty of political experience and insight, with both men involved in various ways. While Weiler has been a State Senator for a decade, he also formally served on the Woods Cross City Council and was the Chair of the Davis County Republican Party. Astill is currently a Vice President for Business Roundtable, a national lobbying firm. Before his current role, he worked for over a decade as a legislative director, policy advisor and counsel for several U.S Senators, including former Utah Senator Bob Bennett and, most recently, Senator Deb Fischer of Nebraska. Astill also serves as a delegate for his local Utah County Republican Party. Both Weiler and Astill are also law school graduates.

“I enjoy podcasting. My experience and current employment keep me up to date on political and policy news. I enjoy sharing what I know and researching new issues. There seemed to be an absence of quality conservative podcasts with a Utah focus. I felt there was room for a substantive podcast geared toward conservatives and moderate Republicans,” said Astill.

The “Political as Heck” podcast is recorded on Sunday eveningsand released on Mondays. The episodes are about 30 minutes long each week, and topics vary depending on current events, including elections and legislative policy. The now 61-episode podcast has been growing each week, and Astill hopes to see its growth continue.