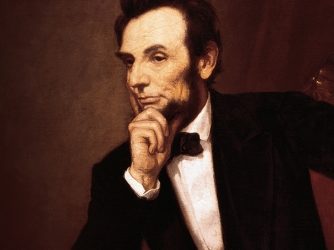 (This is a reprint of a column written by Betty Fowler, editor of the Lehi Free Press for many years. It was originally published February 7, 1990. In a previous column Fowler had mentioned that she did NOT like the change from Washington and Lincoln’s birthdays to President’s Day.)

Okay, I’ve spouted off about why don’t we celebrate Lincoln’s and Washington’s birthdays the way we used to. So, now’s the time for me to put up or shut up. I’ve decided to put up.

Here goes: Washington, as our nation’s first president had to start precedents that would stand the future’s tests. He had to pursue duties as directed by the Constitution. He had to surround himself with patriots who would, in statesmanlike ways, make the colonists glad they’d fought the motherland for their freedom.

That’s a tough task when you consider that many of the people didn’t like to bear arms and fight against their English brothers. The Revolutionary War was not popular amongst the people who came to America for freedom, then had to turn around and fight an almost impossible-to-win war. Yet, because of Washington’s leadership abilities, the fledging nation emerged from the war’s initiation process with flying colors.

Did you know that Washington was six-foot three inches tall? Did you know that he suffered lifelong pockmarks acquired from an early bout with smallpox? His chest was diminished by childhood rickets and his teeth had disappeared over the years, falling victim one by one to the popular cure-all for toothache of any origin—immediate extraction.

His expensive dentures were handmade of the finest hippopotamus ivory. He had frequent bouts with childhood diseases, one of the most annoying of his health problems was a “malignant carbuncle” he developed on his left hip during his first term in office. Consequently, it was very painful to him, especially to sit; in fact, the Presidential coach had to be rebuilt so that Washington could lie down when he traveled.

But, even as an ill and aging man, Washington was impressive. He had a stately carriage, his tremendous mental and strength (despite all his sickness) reinforced his reputation for self- control, patience, and determination. He was highly valued for his strength of character.

Did you know that when Washington was a young man his hair was a rich auburn color? He died at Mount Vernon at the age of 67.

Our first president loved a good time. He was an enthusiastic dancer in his younger days; once he kept a partner on the dance floor three hours without resting.

Let’s honor and revere our first president—George Washington. Let’s not forget the Father of our Country. He was indeed that and more.

And now, a profile of our 16th president, Abraham Lincoln.

He was born in 1809 on February 12 in a log cabin in Hardin County, Kentucky. Dusty gray eyes, bushy eyebrows and large ears all are physical characteristics that helped earn Lincoln his “ugly” description. Those who met Lincoln were invariably struck by the mobility and the expressiveness of his features. His eyes twinkled, his whole face lit up, he became almost handsome when he smiled.

He always seemed to be moving. Even when sitting, he shifted constantly in his chair—first slouching with one leg hung over an arm of the chair, then sitting upright with his long legs jackknifing at sharp angles.

When he was thinking he fiddled with his hair or beard. When he laughed, as he often did—often at his own jokes—he would throw back his head and pull up both knees at once with his arms grasped tightly around them rocking with delight.

The Lincoln wit is famous. President Lincoln has a large reserve of anecdotes and jokes, including some risqué ones, which he enjoyed telling.

Occasionally, however, his humor seemed inopportune, grating those who were attempting to discuss serious matters.

But intimates of the President suggested Lincoln knew exactly what he was doing: those humorous stories, presented at strategic moments, conveniently helped him sidestep troublesome questions, He was appreciative of good prose and poetry and was exceedingly soft-hearted. This, perhaps, accounted for his sincere interest in issues surrounding slavery.

Lincoln was shot in Ford’s Theater, Washington, by John Wilkes Booth and was buried in Springfield, Illinois. He was 56 years of age when he died from Booth’s bullet.

Please don’t forget our great presidents whose birthdays we observe this month.

They were the kind of men we needed in the two most significant times since our great country’s beginnings. It is scary to think what might have happened if it were not for George Washington and Abraham Lincoln.

Editor’s note: two good books on these great men are the Lincoln Hypothesis and Washington Hypothesis by Tim Ballard.