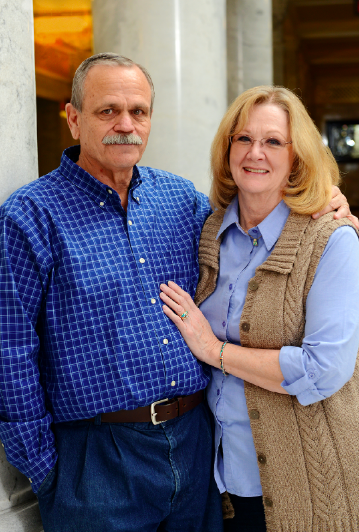 Stephen Holbrook has been named the Grand Marshal for the 2021 Lehi Round-Up city celebration. The Holbrook family has lived in Lehi for generations. Stephen, and his late wife Gail, have been married for 51 years, have 11 children and 36 grandchildren. Gail passed away in April 2019. She left a legacy of love and community service for her children and grandchildren.

Steve grew up in Lehi, and both he and Gail graduated from Lehi High School. After serving an LDS mission, graduating from BYU, and marrying Gail, he returned to work on the Lehi family farm as a third-generation farmer at Holbrook Farms. Gail showed her support by involvement in county and state fairs with her agricultural displays.

Holbrook’s family has always supported Lehi’s annual summertime celebration, from having their children in the parade to building floats. Gail spent countless hours fluffing pom-poms and sewing costumes for the parades. Steve has always participated in the Round-up celebrations. As a young child, he rode in the Lehi Silver Band miniature float and later marched with the Lehi Marching Band.

Holbrook served on the City Council for 12 years, and Gail was always supportive of his public service. She was often found at Steve’s side, serving and helping at city fundraisers and events. One of Holbrook’s assignments was overseeing the building of the Miss Lehi float and transporting it to parades in other cities.

He oversaw the Rippy Literacy Center from its humble beginnings to the very successful program it is today. Holbrook worked with Lehi Arts and oversaw the remodeling of the current building on Center Street. He also worked with the John Hutchings Museum to improve the displays and make the museum more educational for those who came to learn and enjoy it.

While serving on the Library Board, he helped start fundraising activities that were successful and are ongoing.

Holbrook also served on the Lehi Historical Society. Meetings were held at the old train station on State Street, where many ways of preserving Lehi history were discussed and accomplished.

He worked with Lehi’s Veterans, and one of their major projects was to place flags throughout the community, especially on Main Street and in the cemetery.

On the city council, Holbrook worked with Lehi City to purchase the Mary Ann Judd collection of 250 paintings of Lehi historical sites. The artwork is now on display throughout city buildings.

Steve was a volunteer manager of a Church of Jesus Christ of Latter-day Saints farm for 40 years. He served in multiple stake and ward callings, including two high councils and was a Bishop of a BYU ward. He currently serves as a primary teacher.

“I’m honored to be the grand marshal,” Holbrook said. “Lehi has been a great place to spend my entire life and participate in the traditions that make Lehi so great. Thank you, citizens of Lehi, for supporting the Lehi Round-up week.”