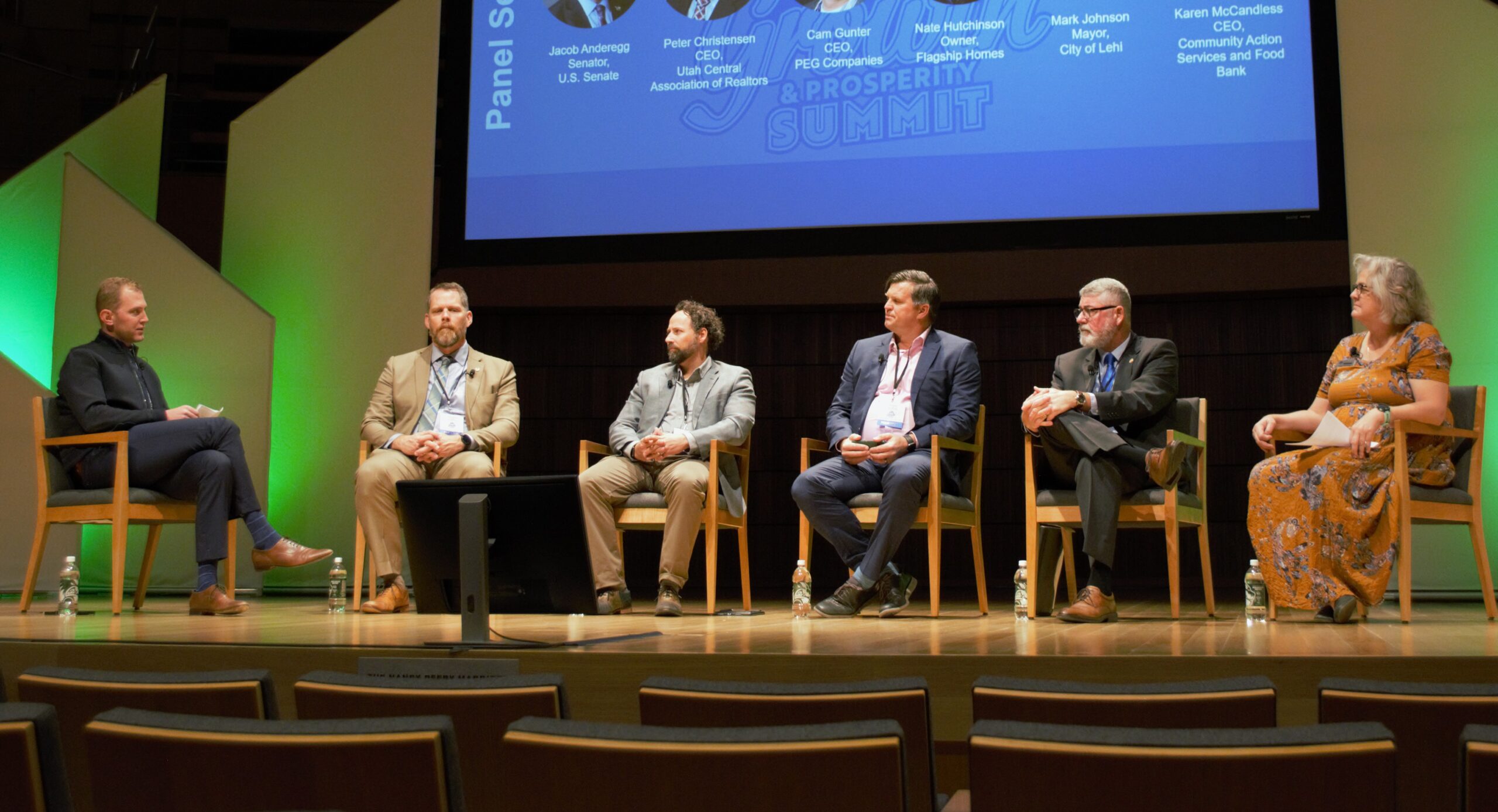 State, city and county leaders gathered at Utah Valley University on Oct. 28 to discuss the future of Utah Valley. Attendees signed a Growth & Prosperity Compact of Utah Valley that briefly outlines the metrics by which the valley will assess and evaluate efforts to keep Utah County prosperous and happy.

“A few years ago, Envision Utah was looking around the state and realized Utah County is the future of the state of Utah. That’s where all the growth is going to be – population and jobs,” said Ari Bruening, CEO of Envision Utah.

After researching and conducting surveys throughout the county over the last three years, Envision Utah has found that residents want to keep their quality of life, have more open space and housing options for their children and grandchildren.

Envision Utah polled 12,000 people in Utah County, and a high percentage want mixed-use centers and a wider variety of housing options within walking distance to work and shopping. “You may be thinking that won’t work in your community; that’s not what the residents who show up to City Council meeting want,’” said Bruening. “First of all, don’t assume that the people who show up to City Council meetings represent the community. They don’t. We have survey results that prove they don’t.”

“People tell us when they’re looking at the entire county, and they’re making decisions in the context of the inevitability of growth that centers with mixed-use is what they want and need. The more we can remind people to think beyond their city boundaries and think about the entire county, the better the outcomes of our planning for the future,” Bruening concluded.

“Utah County is literally the future of Utah. We are the youngest county in the nation–which means the future of Utah is Utah County. We’re also one of the fastest-growing counties in the nation,” Gardner began. “Sixty percent of that growth is coming from our children. If your children are growing up here and staying to raise their families, you are continuing the tradition that has made Utah County great.”

Gardner reminded attendees that 60% of Utah’s growth comes from our children and grandchildren staying here to raise their families. “I’m going to let you in on a secret. The world has figured out that Utah County is the best place in the world, and they’re going to come here. That 40% of outside growth is going to continue. The question is, are we going to be able to keep our children here? When that 40% moves here, the 60% who are our children are going to be the ones to teach them why Utah County is the best place to live and raise a family.”

“As we look at growth, and we look at adding ADUs and more housing and more transportation, I think it’s traditionally viewed that the reason we’re adding those kinds of subdivisions is for ‘those people,’ Gardner continued. “Newsflash, those people are moving here no matter what. The question is, are your children going to be able to stay here? When we’re building those neighborhoods and allowing ADUs, we’re doing it for our children.”

Gardner suggested that everything we do in Utah Valley needs to be done with an eye to growth and the future. “We’re going to double in size in our lifetimes. Most of that growth will be on the west side of the valley. Right now, we don’t have any major roads going to that side of the valley,” she said.

“So we talk about growth like it’s a problem, but in Utah County, growth is the solution,” Gardner continued. “We need those people. That also means we need to have places for those people to live and play and roads for them to drive on. I want us to stop thinking about growth as a problem and start seeing it as the solution. We have an opportunity to teach the world that our culture and our way of life is the answer to a prosperous future.”

“We had a record number of sales during the pandemic. It didn’t feel like it because inventory was so low, and it seemed like there were no houses for sale. The houses were going so quickly, they were averaging three to five days on the market,” Christensen began. “I’m happy to say it’s slowed down a little – we’re up to nine days on the market.”

Christensen said that anything under 60 days is considered a healthy market. “So single digits is not a healthy market. There’s an overwhelming demand and not enough supply. The natural result of that is we see prices escalate,” he continued. Utah has reached pre-recession building levels again, but it took a long time to get there. “We’re still in the tens of thousands of units short compared to the demand we have coming into the state,” said Christensen.

Cam Gunter, CEO of PEG Companies, and Karen McCandless, CEO of Community Action Services and Food Bank in Provo, provided information on the shift in demand for apartment rentals and services McCandless’s company has provided for families in need in Utah during the last year.

“What we’re seeing as far as housing is a huge increase in the number of people who need rent assistance. Community Action Services has provided 5 796 households with rent assistance for over $10 million in the last year. About $8 million in Utah County,” said McCandless.

Mayor Mark Johnson weighed in with his perspective. “If we’re going to make smart decisions for our future, we have to be able to serve the demographics, understand and accept the data, and then we need to plan for it,” he began. “Growth is an issue anywhere along the Wasatch Front right now. The data is interesting and a little bit alarming – by 2050, our population will double, and by 2065 it will triple. Children who are born today are going to be dealing with that. It’s not all California move-ins – we’re ninth on the list of places Californians are moving. The growth is internal.”

“The biggest challenge we have is understanding what the statistics really are. We are all part of the growth. Until someone can tell me how to put the babies back, we need to decide how we’re going to plan for the growth. We know what’s coming, and it’s dangerous to ignore it,” Johnson said.

Utah State Senator Jacob Anderegg spoke about affordable and attainable housing in Utah. “We have 19 people living in a 2-bedroom apartment with one bathroom. That’s happening. Those people are also one life event away from being homeless,” he said.

“I tend to be socially progressive and fiscally very conservative, and I can say that when someone goes from being housed to being homeless, we spent as a state somewhere around 20 to 1 on homelessness intervention. I can make the political, conservative argument that if we can keep people in their homes, we’re going to save ourselves 20 to 1 dollars. As a conservative, that makes sense,” Anderegg added.