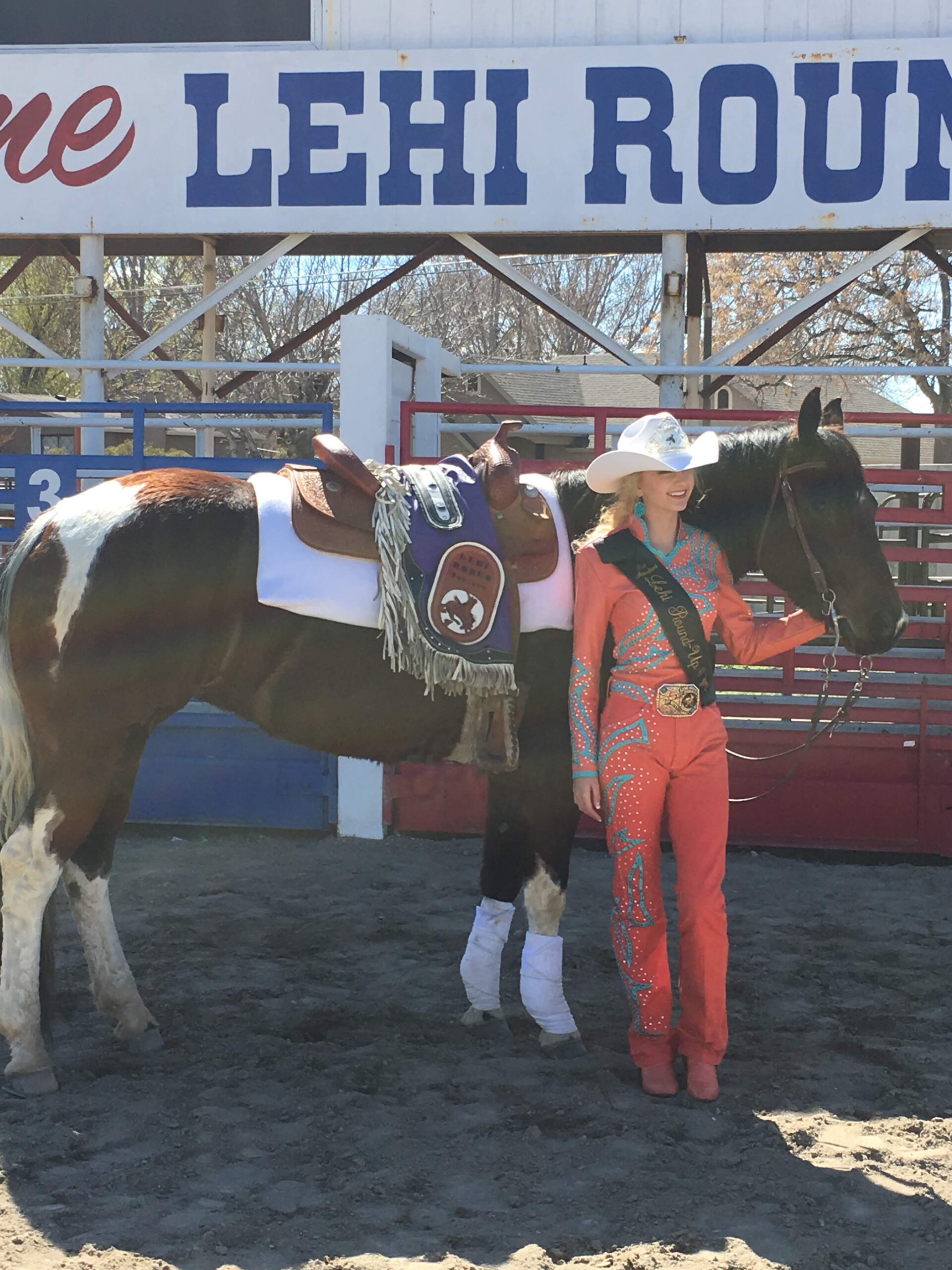 She was born and raised in Lehi, Utah and still lives there still. She attended Lehi High School, graduating in 2017. She is a licensed nail technician, receiving her trainingfrom MATC (now MTECH). Aside from rodeo queening, Kassadee enjoys swing dancing, baking, and being outdoors. After queening, Kassadee plans to attendcosmetology school, specializing in hair extensions.

Kassadee began her rodeo queening journey at age 14. Rodeo has always been a part of her family, and it was the family sport. Rodeo queen fashion is very unique. For instance, rodeo queens traditionally wear a full-length dress made of lambskin leather. Kassadee’s very first dress was purchased from another Lehi native rodeo queen-Jodi Thacker. It was peach with turquoise stars. Rodeo queen competitions in high school are judged on impromptu onstage question, prepared speech, horsemanship pattern, modeling, personality, appearance, and personal interview.

Her rodeo queen prepared speeches in high school were about being a triplet, and later, barbie. She typically did horsemanship patterns on her black and white paint horse (with quite the attitude) Skunk. Kassadee attended 30 rodeos a year-15 in the fall, 15 in the spring. She did this, repeating the same events, for three years before she finally won a queen title her junior year of high school. By this point, she had been through a myriad of leather dresses, speeches, and had grown an immense amount. At the end of that year, Kassadee won second runner-up at the Utah High School Rodeo queen contest.

She put a hold on queening her senior year as rodeo queening is not an option for seniors. During this time, she tried out for her first rodeo queen competition in the PRCA (Professional Rodeo Cowboys Association). She won that contest and became the Pony Express Rodeo Queen for Eagle Mountain City. She later tried out for her hometown rodeo queen -Miss Lehi Round-up Rodeo and won the title in 2017. She was the queen during the same time that her sister, Kadee Jones was Miss Lehi. Kass went on to win the titles of Miss Wilderness circuit and Miss Mountain Valley Stampede Rodeo queen.

Kassadee competed for the title of Miss Rodeo Utah in 2017. In this contest, she competed in two different horsemanship competitions, a personal interview, horsemanship interview, impromptu speech, on-stage question, written test, fashion show and modeling. Kassadee won second runner up her first time at the Miss Rodeo Utah competition, and then fourth runner-up her second year.

You can see the details for Kassadee’s 2019 win in this article Lehi Free Press article about Kassadee’s queen success. .

Since Kassadee’s win, she has traveled across the state and nation to various rodeos representing the Beehive state. She has also visited many schools to promote her personal platform “Bee Kind.” Kassadee was asked to serve a second year as Miss Rodeo Utah-the first time anyone has ever served in a two-year capacity. She has been preparing for the Miss Rodeo America competition during her two-year reign by riding more than 100 horses, interviewing with various individuals, and remembering facts from her two very large rodeo knowledge books, nowfilled with highlighter.

Jones’ wardrobe for the competition has been created by a myriad of rodeo queen experts including her mother, Lehi native and former Miss Rodeo Utah, Martina Larsen, and even Kelli McDonald, the wife of Bon Jovi’s bass guitarist.