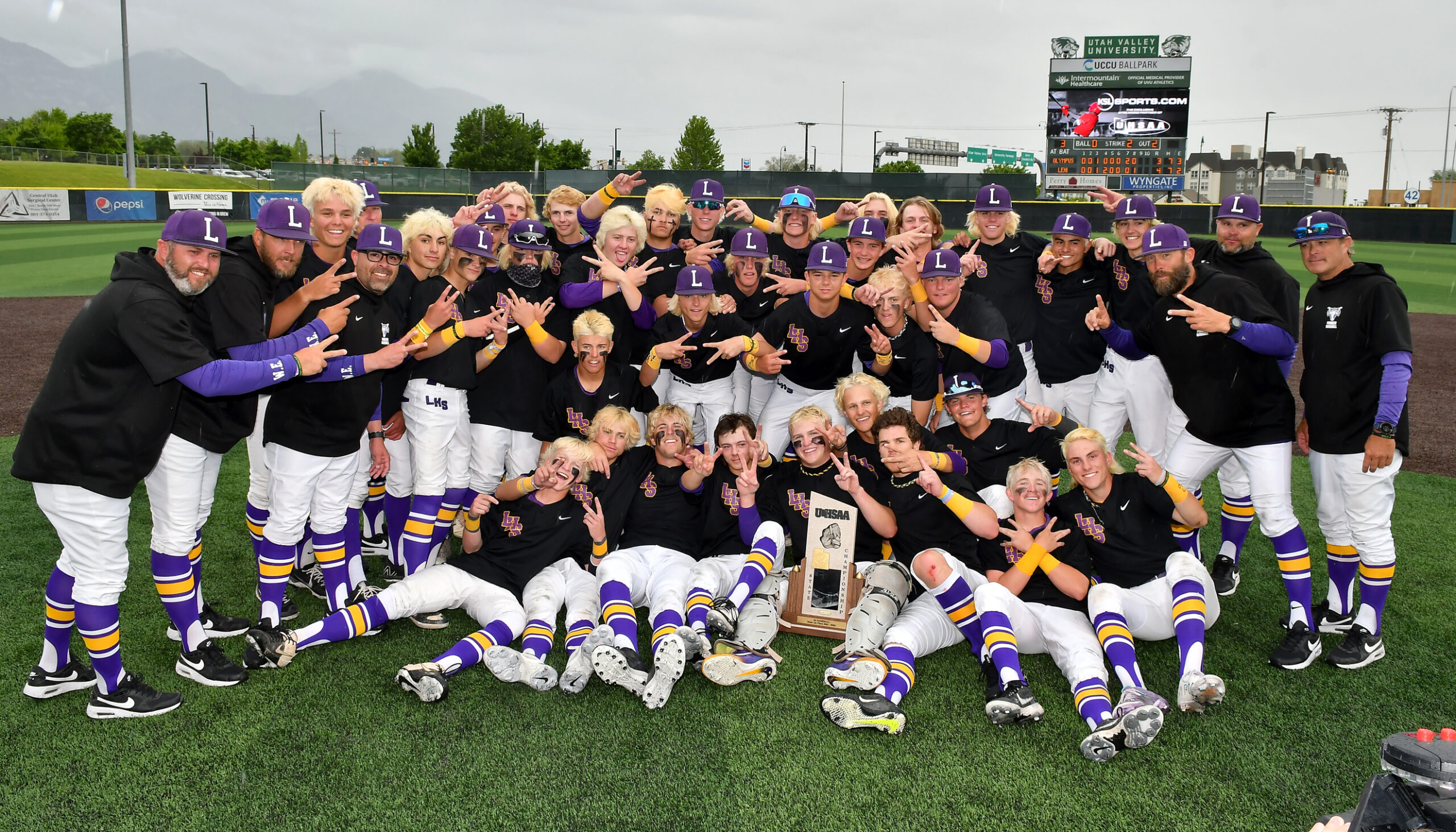 It was the kind of high drama that happens only in baseball.

In a slow-moving game punctuated by bursts of frantic activity, the #2 Lehi baseball team battled #4 Olympus Saturday (May 28) at Utah Valley University for the right to receive the 5A championship trophy in front of a packed house despite the cold and rain.

Since the Pioneers won the first of the best-of-3 series games the night before, all they needed to do was wrap up the second one to give the school its first baseball title in 41 years.

However, the Titans had other ideas, scrapping hard the whole way to try to force a third deciding contest.

After two scoreless innings, Olympus got on the board first with a run in the top of the third. In the bottom half with one out, Lehi junior McGwire Madsen drew a walk and later scored on a sacrifice fly to center by junior first baseman Jackson Brousseauto tie the tally.

The starting pitcher, senior Maddux Madsen, retired three of four batters in the top of the fourth to return the Pioneers to the plate.

Junior catcher Boston Bingham smacked a double off the wall in center field to lead things off. Senior right fielder Jaxon Christensen then launched the ball well over the fence in center field more than 400 feet away to give Lehi a 3-1 advantage.

The taut pitcher’s duel continued through the next two scoreless innings. In the top of the seventh, the Titans put some hits together to get two runners across the plate and knot the score again at 3-3.

In the bottom half with everyone in the stands on their feetreacting to every pitch, the Pioneers got two men on base with back-to-back singles and one out. But the Olympus shortstop made an outstanding play on a hard-hit line drive that helped retire the side with no harm and bring on the extra inning.

Both starters had reached the pitch count limit by then, so the fate of the game was passed on to other arms.

Lehi senior Zach Evans was called in from center field to take the mound in relief. His turn didn’t start off well. The first Olympus batter doubled to the wall and the next one got hit by a pitch to put two runners on base. The next batter laid down a sacrifice bunt to move them both into scoring position.

Not to worry. Maddux Madsen, now reverted to his other position as catcher, gunned down the runner at third when he took just one step too many down the base path, and then Evans struck out the next player to put the Pioneers back on offense.

First up was Maddux Madsen, who stepped to the plate and hit a sharp single to left-center, but he and the next batter were both thrown out with a crisply-executed double play.

However, Christensen was issued a pass as he was hit by a pitch,and he later successfully stole second with Evans at the plate. Evans then powered the ball to center-right to bring Christensen home and initiate the celebratory dogpile.

“We watched them on Wednesday and we knew what they wanted to do,” said Maddux Madsen. “They love to squeeze so I just had Zach pitch out so I could throw it to catch the runner at third. I knew he would get the next guy.”

As far as his pitching went, Maddux said, “I feel like I was in control for the first six, but in the seventh, they hit me a little bit. We know there’s a panic button, but we made a decision to not push it. I felt sure we were going to win no matter what.

“Zach has been so hot the last few weeks,” he added. “He’s worked so hard all his life that I knew he’d come through.”

“These kids are so awesome, I’m just happy for them,” said Coach Jason Ingersoll. “Zach is a quiet guy but he does what he’s supposed to do. He comes in out of center field and gets outs.”

As for Maddux Madsen, the coach said the mindset he contributed made a big difference to the team. “He’s a Division I quarterback for a reason,” Ingersoll said. “The leadership he brought can’t be taught and it’s pretty special.”

Now concluding his 10th season as head coach, Ingersoll struggled to control his emotions as he reflected on his team’s journey this season. “It’s hard to win these titles,” he said. “No one knows how hard it is unless you’ve done it.”

Now his whole team knows, and finally, he does too.