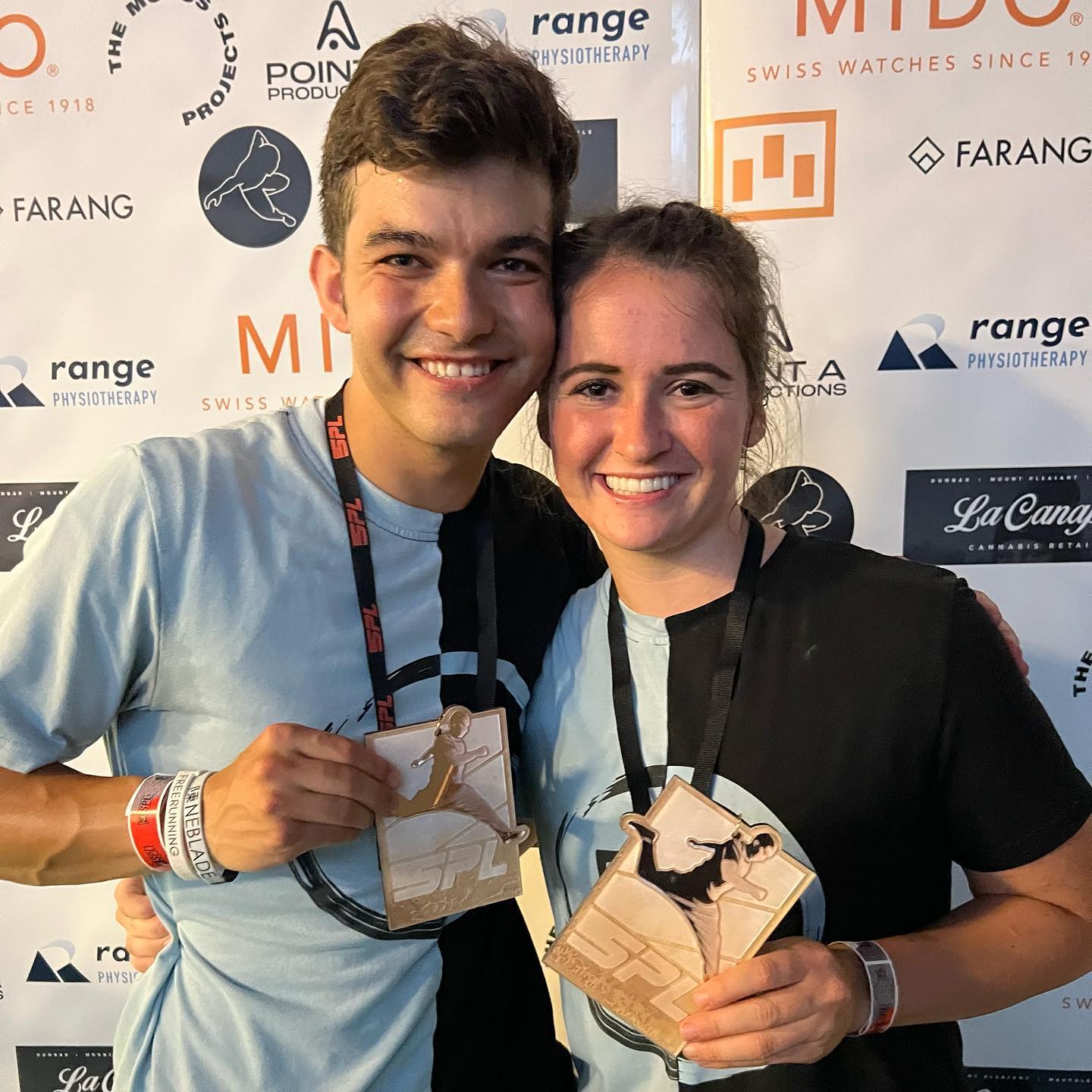 Reagan Chan literally flipped the first time she met her future husband, Calen Chan. “I’d seen videos of him on YouTube and tried to get his attention by doing crazy flips,” remembered Reagan.

The Chans met at a trampoline gym in Provo, where they both practice parkour.

Parkour is the practice of traversing obstacles in a man-made or natural environment through running, vaulting, jumping, climbing, rolling, and other movements to travel from one point to another quickly and efficiently without equipment.

Calen Chan has been a parkour athlete for 16 years, competing internationally since he was 18. Reagan is a Level 5 gymnast and the first FIG (International Gymnastics Federation) sanctioned athlete to compete in parkour. Last week Calen and Reagan took third place in their divisions at the Sport Parkour League (NAPC) in Vancouver, Canada, an international competition.

Parkour began in France in the 1990s in the outskirts of Paris. David Belle originally developed the parkour concept according to precepts about the art of movement laid down by his father, a Parisian firefighter.

As teenagers, Belle and his friends from the Yamakasi group practiced jumping and climbing over stairs, barriers, walls and other fixtures in his city. Doing so, he made up what they called the art of moving, taking advantage of all the constructions and obstacles that were not created for this purpose.

For them, parkour was just a kind of training method forovercoming all forms of obstacles in urban and natural environments, such as forests. Since the 90s, this way of moving has been popularized more by its inclusion in the film industry. The films have inspired various sporting events in many countries and have created a new generation of “tracers” (parkour practitioners) around the world. While the founders of parkour were not keen on competition, this trend made them consider sporting events a good showcase for raising awareness of the discipline worldwide.

Calen Chan tried other sports as a kid, but nothing clicked until he tried parkour. “Parkour kids were always the weird misfits. It’s a running joke in the community that if you do parkour, it’s because you’re poor,” joked Calen. “Anyone can do it because there’s no equipment to buy. You can use your environment to train.”

The Chans have made friends all over the world in parkour competitions. “It’s a strong community – we’re all good friends. It takes a lot of the pressure off when you know everyone is cheering you on,” said Calen.

Two more international competitions are coming up, the PK World Cup in Sofia, Bulgaria, on September 11, and the Parkour World Championships in Tokyo, Japan, on October 14. The Chans hope to be there. Calen recently started a GoFundMe to raise the money they’ll need to travel. “It has been my dream for over nine years to win one of these International Freerunning competitions, and it kills me that the money to get there is the limiting factor,” said Calen.

Freerunning, an offshoot of Parkour, is the art of expressing oneself in their environment without limitation of movement. It includes traditional Parkour movement but also includes flips and spins and more theatrical movements. In parkour, athletes vault up or down walls, landing in narrow spaces, rolling and hanging. Both disciplines have been featured in movies and are gaining momentum as competitive sports on the world stage. The parkour community hopes to have the sport sanctioned for the 2028 Olympics in Los Angeles, California.

When they’re not competing, Reagan and Calen Chan are working on the class curriculum for parkour at Jump Up Gymnastics in Lehi. “Parkour isn’t about punishing the body. It’s very different from gymnastics – it’s a training you can do for as long as you want,” said Calen. “Anyone can do it.”