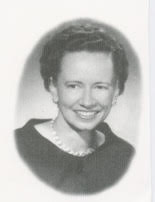 Born December 31, 1915 to James Heber Comer and Frances Jane Jones, Nola grew up in a loving and kind home enjoying her siblings: Harold, Ted, and Shirley. She attended grade school in Lehi, skipping the 6th grade. She graduated from Lehi High School and from Seminary. She loved being on the typing and debate teams in high school and won a medal at the yearly BYU Commercial Contest for typing speed. Upon graduation from Lehi High she immediately registered at BYU, paying a $15 registering fee. She worked for President Harris as his secretary for 4 years. She finished all her courses a semester early and went to Ogden, working for the Forest Service. She came back for graduation exercises and 2 weeks later married her high school and college sweetheart, Mark Barratt Chadwick in the Salt Lake Temple. They had 2 children, Nola Kay and Bruce Barratt. At age 28 she was widowed and left with two children to raise during WWII.  She worked as a court reporter for Judge Young, leaving her children with her mother when they had to go out of town on the judge’s circuit. Three years later she met and married Jack Lasson Williams. They then moved to CA. They had 2 sons; Jack Comer and Harold Jay. Later they moved to Bellevue, WA. After being gone from UT for 40 years she retired and they bought a house in Kaysville, UT. She was widowed a second time. The family wants to thank two fine gentlemen; one, her cousin Elden Comer, who took her under his wing and showed her some of the amazing sights she had wanted to see since childhood, and the second, Bob Roberts. They both shared companionship with her. The family also wants to thank Hospice for their kind and loving care during Mother’s last days at home.