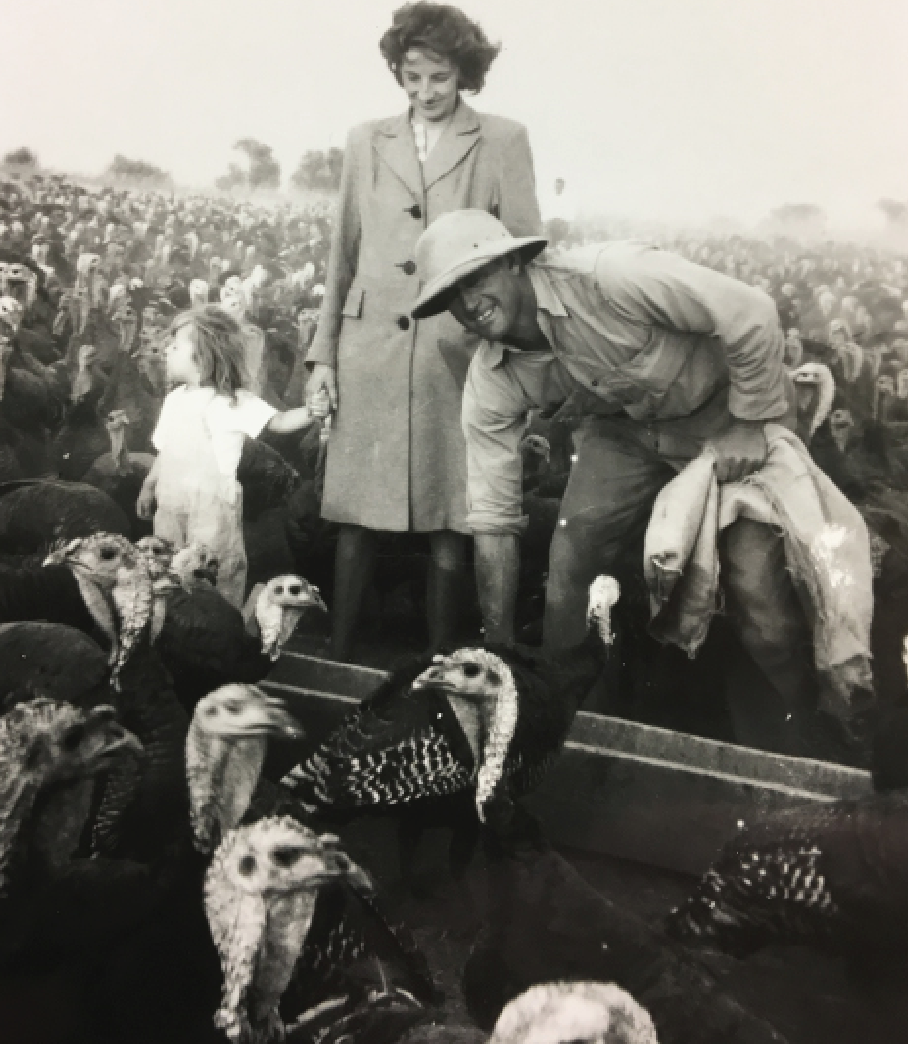 I snuggled as deep as possible into my old war-surplus sleeping bag on a very cold and windy November night in the Fall of 1957.  Dad told me to stay in my sleeping bag stretched across the bed of the green Dodge pick-up truck in case he needed to get up in the middle of the night. We were parked in a willow patch on the bank of Bull River (The Murdoch Canal), just a week before Thanksgiving on Lehi’s North Bench, bordering dad’s 340-acre farm.

Thieves had already visited the turkey farm on two or three occasions and several turkeys had disappeared into the hands of midnight criminals. At that time, Dad had seven children and ten thousand turkeys…and loved them all equally. I awoke from a troubled sleep as dad sat up and whispered to me to be very quiet. I could distinctly hear a car’s engine running as dad pulled on his Levi’s. We watched the headlights of a black vehicle fade away at the bottom of the turkey pen about a hundred yards below our hidden truck. “You stay here,” he said tying his shoe laces in the brisk cold air. “I wanna come with you,” I replied quickly. I was more scared to stay behind alone in the cold bed of the dark truck than to think of a confrontation with dangerous turkey thieves.

“Okay,” he said, “but you gotta keep ten steps behind me” he insisted. “Hurry!” he stammered. I dressed in a few seconds and pulled on my black corduroy coat as he slid his 30-30 carbine from its sheath and “thumbed” two bullets into the gun’s magazine. The moonless night was so dark I could barely keep him in sight as he walked quickly and quietly down the fence-line toward the car. Two men were already in the turkey pen with gunny sacks and flashlights.

One silently grabbed a large hen from its roost in the nearest shelter and placed her in the other man’s bag. Then, he grabbed another bird without disturbing the whole roost of turkeys and stuffed it into his own bag. They had done this before and knew exactly how to steal turkeys without causing alarm to the flock.

Dad walked low to the ground carrying his gun in one hand and a clenched fist in the other. The men had two turkeys in each bag as they ran silently to the field’s fence. The first thief handed his bag to the other crook and hopped over the fence with one hand on the fence post and reached back to take both bags of turkeys from the other thief. Dad turned and motioned for me to stay where I stood. He bolted toward both men just as the second thief jumped over the fence.  “STAY WHERE YOU ARE OR I WILL SHOOT BOTH OF YOU!” he commanded.

Suddenly, we realized there were accomplices when two women in the car began screaming. The startled men froze momentarily as they turned to face dad. “Put the turkeys in the car” said one of the men to the other. The other guy hesitated before shoving the first gunny sack into the open trunk of the car. He yelled at the women to “shut up!”  He then walked toward the car with his bag of turkeys as dad climbed over the fence.

“Put those turkeys back over the fence right now” dad said angrily as he pumped a shell into the chamber of the gun. “You ain’t got the guts to shoot me buddy,” the nearest man said defiantly as he turned to face dad with a hand ready to slam down the trunk. Lowering the barrel of his 30-30 Winchester a few inches, dad fired a shell into the ground between the man’s legs. The BOOM of the gun startled me so much I thought for a moment dad had really shot the turkey robber. He sank to the ground and yelled “YOU SHOT ME…..YOU SHOT ME!” The women began screaming again.

Dad told the other man to take the turkeys out of the trunk and put them over the fence. He complied immediately and began to cry. Dad told the women to be quiet. They did. The man on his knees whimpered, “I can feel blood running down my leg!” Dad told him to stand up. “You just peed your pants!” he laughed, then told them to give him their flashlight and get in the car. He took the flashlight, wrote down their license plate number and told them to leave and never come back. They sped away into the night. I ran over to dad and grabbed his coat. “I guess we sure scared those rotten sons-a-bee’s” he grinned.

We went home and told mom the events of the night. She had Dad call Dean Kirkham, the County Sheriff from Lehi. Sheriff Kirkham was soon at the house and Dad gave him the license plate number and related the events of the night. The day before Christmas, Sheriff Kirkham knocked on the kitchen door and when mom answered he handed her a 100-dollar check and said, “here is the reward money for Don’s tip regarding those turkey thieves. We got a search warrant for a house in Orem and found nearly a hundred stolen guns, bicycles, TVs, lawn mowers, chain saws and other stuff. There was a reward for anyone who could give information leading to the arrest and conviction of these rascals. They confessed to everything and are in jail. They even told us how some guy in Lehi nearly killed them all.  Please tell Don ‘thanks’ for his courage and help in capturing these thieves.”

The money was a nice Christmas bonus for mom and dad that year. I have always been amazed at the courage Dad showed that night and often laughed at the thought of the “blood” running down the leg of that midnight thief.

Kennyisms: Group Training – Why it Works

Kennyisms: Group Training – Why it Works