Ruth the Gorgosaurus, unveiled at the Museum of Ancient Life 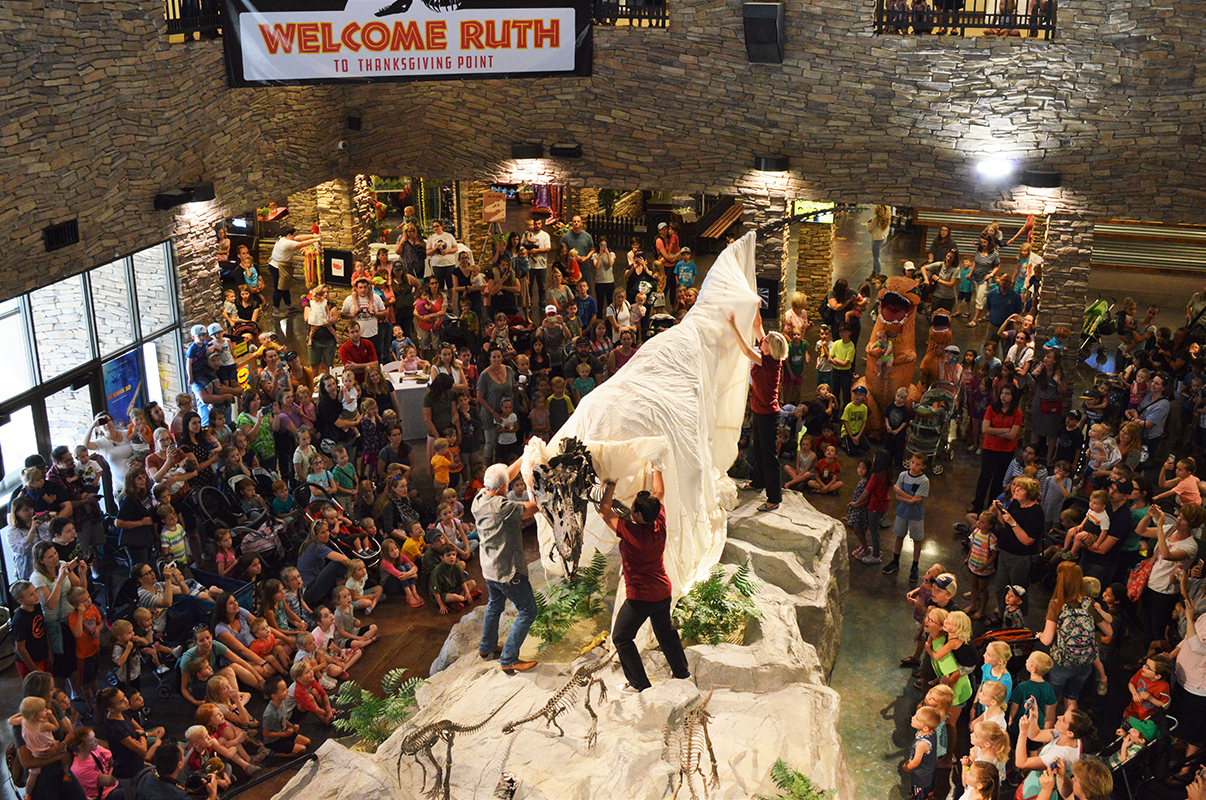 Families and dinosaur enthusiasts started lining up in front of the doors of the Museum of Ancient Life at Thanksgiving Point hours before the grand unveiling of Ruth the Gorgosaurus last Friday, June 22. The new dinosaur graces the lobby of the museum, an impressive 90% complete skeleton.

“Thanksgiving Point is a really special place,” said Lorie Millward, Vice-President of Design and Programming at the Museum of Ancient Life. “It’s a place that was built because we wanted families to come learn together. The special thing we’re going to show you today is the result of families working together.”

Kids were able to get hands on experience with fossils at the Museum of Ancient Life. | Nicole Kunze

Millward went on to tell the gathered crowd that the 14-year-old son of Sandy and Cliff Linster, Wesley, found a dinosaur bone on their Montana ranch in 1993. Wesley’s discovery got the whole family excited and interested in finding fossils. For the next 15 summers, the Linster family worked together to carefully and properly document, photograph, and number every one of the more than 9000 fossil bones they found on their land. During one of the summer digs, Cliff Linster discovered the skull of the Gorgosaurus, Ruth, that now resides at the Museum of Ancient Life. It took three years to excavate Ruth’s skull. She is one of the most complete and best-preserved Gorgosaurus specimens.

Rick Hunter, a paleontologist at the Museum of Ancient Life, removed the sheet covering Ruth to gasps and cheers of appreciation at the unveiling event. Hunter explained that Ruth had a difficult life – she had several broken bones that healed while she was still alive. Since Ruth’s skull was almost completely intact, scientists were able to make a mold of the inside of the skull, which led them to discover that Ruth had a large tumor in her brain – the first known evidence of brain cancer in a dinosaur. Hunter explained that the tumor affected Ruth’s motor skills and she likely fell down a lot.

Ruth the Gorgosaurus was supposed to go to a university, but the Linster family wanted to share their story of finding Ruth and doing scientific work as a family. The Linsters searched for a home for Ruth that could share their story as well as their philosophy and Thanksgiving Point was just the right fit. “This whole museum was built by people who are non-traditional paleontologists. We encourage all our patrons to explore, to get outside, to make discoveries,” said Millward.

The Linsters have since sold their land to the Wyoming Dinosaur Center, and they are continuing to dig and discover fossil bones at the old Montana ranch.