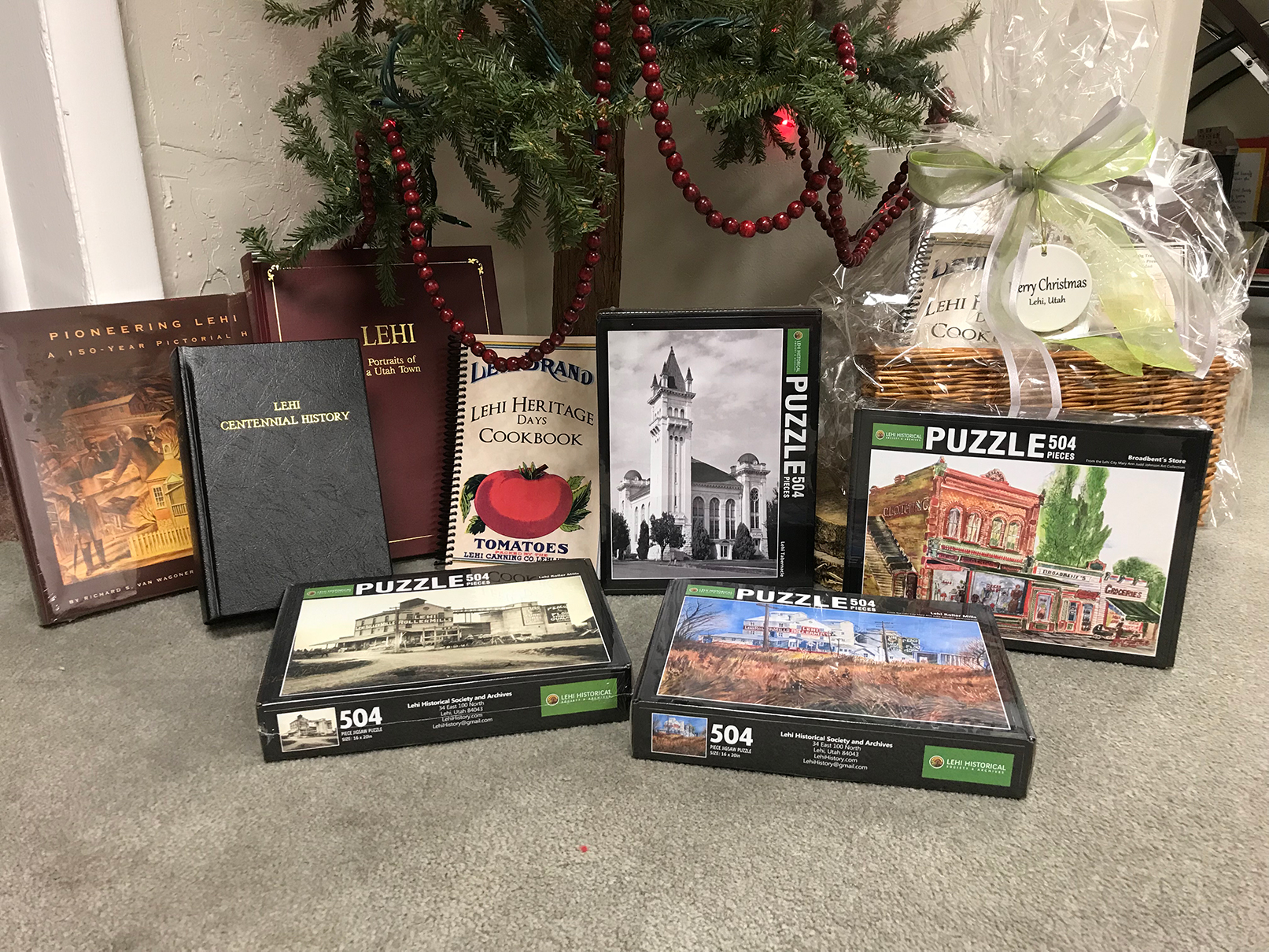 Created by The Lehi Historical Society and Archives to celebrate Lehi’s inspiring history and to bring in needed funds, the 504-piece puzzles feature some of Lehi’s most iconic places, including Lehi Roller Mills, Broadbent’s store, and the old Lehi Tabernacle.

“It makes us really happy to be able to offer some Lehi history in such a fun way,” said Lara Bangerter, director at The Lehi Historical Society and Archives.

The puzzles cost $25 each and the ornaments are $9. All proceeds benefit The Lehi Historical Society and Archives. Orders can be made online at LehiHistory.com or patrons are invited to shop at the Archives Tuesday through Thursday from noon-5 p.m. As of today’s publication, half of the puzzles and all of the ornaments have been sold. A second shipment of ornaments is expected in the next week or so.

Two of the puzzles feature beautiful, historic photographs. One highlights Lehi Roller Mills in the early 20th century with wagons loaded with flour. Located at 833 East Main, the mill appeared in Paramount’s 1984 blockbuster movie, Footloose, and is among few Lehi businesses to remain in retail for more than 100 years.

For nearly 15 years after the Spring Creek Flour Mill ceased operation, Lehi farmers had to haul their grain to American Fork for milling. After considerable effort by the Lehi Commercial Club, June 22, 1905, Lehi Banner announced that Lehi was to have, “a new flour mill with modern pattern and equipment.” Stockholders of the Lehi Mill & Elevator Company invested $20,000. Ever since, the community of Lehi has enjoyed the mill’s flour.

The other photograph features The Church of Jesus Christ of Latter-day Saints’ Lehi Tabernacle, which for many years was the most majestic building on the horizon upon coming around the Point of the Mountain. Lehi members of the Church helped build two tabernacles—the Provo Tabernacle and the American Fork Tabernacle—before it got its own and then was the first to lose theirs.

The first meeting in the unfinished building was held in 1905. It became the cultural center of Lehi. Besides church meetings, many funerals, social gatherings, Boy Scout Courts of Honor, seminary graduations and commencement exercises took place in the facility. Unfortunately, in 1962, the building was razed to make way for a new church building. Today, many Lehi residents still lament the demolition of the building.

The last two puzzles of Lehi Roller Mills and Broadbents and the Christmas ornament feature paintings by local Lehi artist Mary Ann Judd Johnson. The paintings are part of Lehi City’s vast collection of the artist’s renderings of local places. The Historical Society thanks the City for allowing use of the paintings. Johnson is known for her vivid colors and the nostalgia she creates for times long gone. “They work beautifully as puzzles,” said Bangerter.

Lehi’s Broadbents is most certainly one of the longest-running family businesses in Utah. Sadly, the longtime business closed its doors after 135 years on Aug. 31, 2017. It had its beginnings in 1882 when Joseph S. and Sarah Broadbent opened a small 15’ x 30’ store off the side of their adobe home on First North and First East. Joseph repaired watches, and Sarah made work clothing.

By the mid-1880s, the size of the store had doubled with a second wooden addition on the north of the original store. Under the management of their son, Joseph Samuel, it soon had two departments: dry goods and groceries. In 1891, the Broadbents purchased the first sack of beet sugar from the Lehi Sugar Factory and from then on refused to carry cane sugar which was cheaper. It cost them business, but it was a price they were willing to pay to support Lehi’s farming. It was a sorry loss for the community when it closed. The building will soon be torn down for the new public safety complex.

Besides puzzles and ornaments, the historical society also offers the Lehi Heritage Day Cookbook as well as a variety of Lehi history books. For a more complete idea of what is available at the Archives, call 801-768-1570 or check them out at LehiHistory.com. The Archives is open Tuesday-Thursday from noon-5 p.m. and is located at 34 E. 100 North, Lehi.