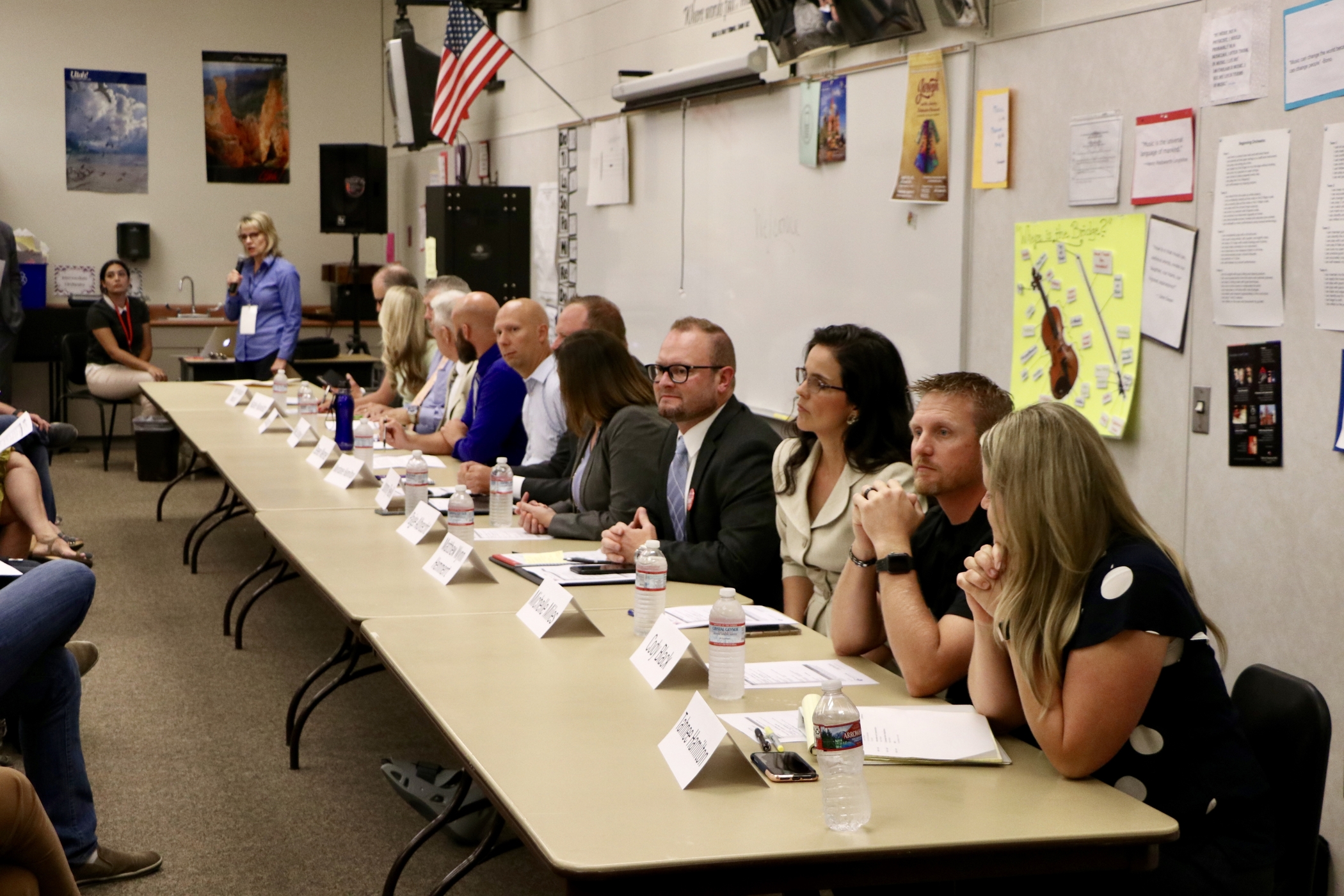 Around 175 residents packed the orchestra room at Willowcreek Middle School to hear Lehi City Council candidates discuss their positions and ideas for the city at a debate sponsored by the Lehi Free Press and Point of the Mountain Chamber of Commerce. Candidates answered questions about traffic and growth, the role of the city in recreational offerings, and their public service records.

Among the group are candidates who have lived in Lehi for just over a year, to one who has lived here for close to 65 years (Mike Southwick), with everything in between. One theme that was repeated several times was the idea that it’s important to bring “old and new together” in the rapidly growing city.

The debate was efficiently moderated by Nicole Kunze, reporter for the Lehi Free Press, and Senator Jake Anderegg, who represents Lehi in the Utah State Senate (SD 13).

After each candidate took a minute to make a personal introduction, the group was split in two, with six candidates leaving the room while the other six remained at the table to answer three questions. When the first group was finished, the second group took their turns.

Candidates were only able to touch on their main points as the size of the group limited response time to one to two minutes each.

In response to the first question, several said they were concerned that increasing the rate of high-density development does not improve affordability but decreases it, and that Lehi should put a cap or establish some type of slow down on the development of high-density housing or business development. These included Koivisto, Oviatt, Werner, and Tahnee Hamilton.

Koivisto, a real estate appraiser, said she often hears concerns about housing affordability. She supports a cap on high-density housing, which includes tightly-packed subdivisions as well as condos and townhomes, saying that a cap would help alleviate traffic congestion while also slowing the steep rise in home prices.

Oviatt expressed concern about the strain on water resources posed by high-density development.

Tahnee Hamilton said, “Infrastructure seems to be on the back burner when development is on the table. It needs to be at the top of the list.” She said while she has seen the city get excited about bringing new businesses to Lehi, it needs to put similar effort into addressing the traffic issues that come with growth.

Hemmert said that “Euclidian zoning,” in which commercial and residential are zoned apart from one another, increases traffic. He sees mixed-used high-density development close to mass transit as a solution.

Revill expressed support for impact fees, in Lehi and in other cities, to help get infrastructure built up faster in new areas. Black agreed.

Black also said he would not support tax incentives to businesses. “Lehi City is great and we don’t need to pay anybody to come here. Development should pay impact to the city.”

Kneitz said he supports the use of smart lights to alleviate traffic congestion.

There were a wide variety of public service records among the candidates, as follows:

Koivisto – HOA president (with a focus on bringing the budget into the black), church service

Miles – Board member and president of an educational non-profit.

Oviatt – This campaign is his first foray into public service.

Southwick – City Council and associated duties, volunteer firefighter for 25 years, and many years of service on the Lehi Round-Up Committee (formerly the Lehi Civic Improvement Association) including current service as Vice President

Among those who think the city is responsible for parks and support bonding for them were Southwick, Oviatt, Hemmert, and Revill.

Southwick said he believes it is the city’s responsibility to provide parks but not necessarily performing arts, although “that’s something we need to work toward.”

Albrecht said that with the rejection of the bond, Lehi residents made their voices heard. “If you want nice things, you have to pay for them,” she said. While the bond would have been “fast and fancy,” Lehi has accepted the need to move forward with practical options, including citizens putting in time and effort.

Candidates who advocated for debt-free financing included Werner, Koivisto (who emphasized infrastructure needs to be the current priority) and Black.

Montane Hamilton said that while he doesn’t think the city is responsible for providing arts and recreation, if the people want them, then they need to be paid for. He said higher taxes are preferable to bonding because the parks “need to be paid for long term.”

Those who mentioned support for public-private partnerships between the city and corporate sponsors such as the current proposal for Arsenal Soccer to partner in the development of Peck Park included Werner, Southwick, Oviatt, Koivisto, Tahnee Hamilton, Miles, Black, Revill. Other candidates may support the idea as well but didn’t specifically mention it.

Lehi resident Jan and Rae Bair, who arrived early and sat near the front, said they found the event very helpful in making a decision. They appreciated the opportunity to put faces to names and hear them explain their positions in their own words.

Attendee Wendy Shoop said she had already chosen two candidates to vote for, and the debate helped her narrow down the field for her third choice. She said she is looking for candidates who have a “long view. We’ve been stuck behind the eight-ball and trying to catch up. We need someone who can get ahead of it.”

The primary election will be held on Tuesday, August 13. Ballots were mailed in late July and must be postmarked by Monday, August 12. Voters are also welcome to bring their ballots to Lehi City Hall up until 8 p.m. on Election Day, or come to city hall if they have lost their ballots. The primary election will eliminate eight of the 14 candidates, leaving six to face off in the general election on November 5, 2019.