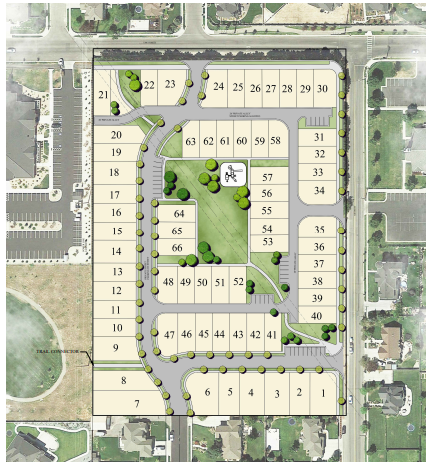 “We know that high-density is an issue, why would you come back with even more units than the last concept?” asked Planning Commission Chairperson Matt Hemmert.

“We eliminated the larger lots and added a park area, so we added one lot to offset those costs,” Mackay responded.

During the public input hearing on the revised Dixon Ivory Ridge concept, four of the twelve residents who made comments gave negative feedback about the plan. Most residents liked the changes Ivory Homes had made and supported the higher density housing option.

“I like what Ivory came up with, it’s a great improvement to the neighborhood. People talk about high-density not ‘fitting’ in this area, but how does a mink farm fit this area? It doesn’t. This subdivision does,” said Craig Madsen.

“I want the flies gone too, but this is a long-term decision we’re talking about here. We need to consider the infrastructure. There are condos and townhomes all over Lehi, we don’t need to be in a rush to cram so many people into this small area,” said Shannon Topham.

After the lengthy public hearing on the Ivory Homes concept plan for the Dixon property, Brad Mackay spoke again to thank residents for their input. “I’m glad to hear all the comments, good and bad. There are more people here tonight than the first time we came and it’s good to see people involved in their community,” said Mackay. He reassured residents who were worried about school-age children walking along busier roads that there will be a trail through the middle of the subdivision where walkers can cut through and avoid the busy road.

“I’m probably going to get in trouble for this, but I think it’s playing cute to come back and find a zone that fits the original density plus one more [residential unit/home].

It’s just another backhanded way to get the original plan and the original plan doesn’t fit. It’s not about mink farms and traffic to me. I’m looking at the application of the code. They need this density to make a profit, but I don’t think I should take that into consideration,” said Hemmert

“I don’t think there’s going to be a proposal with less density than this one,” commented Planning Commission Member Roger Ellis.

“This certainly improves the safety in the area, especially by adding sidewalks. There are four ways in and out of the subdivision, it provides more housing options – I like it,” said Planning Commission Member Jared Peterson.

“I’ve enjoyed these discussions on this issue. I like that these are single-family homes; I see walkability with a rec center close by and schools. The upgrades are going to improve safety, too,” said Planning Commission Member Scott Bunker.

“I don’t like the precedent this sets if it’s approved, but I like the concept. I have no problem with density. I wonder that it’s ‘affordable,’ though. It’s a valuable thing to attract a different demographic to the area,” said Planning Commission Member Tyson Eyre.

Brad Mackay with Ivory Development was in the hot seat again for the next item on the agenda, a request to remove 5.47 acres of property from the Thanksgiving Point Area Plan and changing the zoning on the property from RC (resort community) to LDR (low-density residential). “This is kind of the forgotten property at Thanksgiving Point. It’s not included in the original land map. We’re hoping to add these units to the Holbrook farm area,” explained Mackay.

“I have the best neighbors in the world, I love this area. It’s very frustrating to come before the Planning Commission every year re-litigating the same things over and over again. There should be better gatekeeping on your staff. Here we are again! This should be off the table for your staff unless something substantial has changed. There’s a disconnect between your staff and residents. Nothing has changed,” said resident Rachel Asbury.

“In the 12 years we’ve lived at Thanksgiving Point my children have had to change schools three times. Every month we have to check to see what’s happening in our neighborhood now and go to these meetings to protect the vision of the Thanksgiving Point resort community,” added resident Carolyn Morris.

“We view Thanksgiving Point as a treasured property – it’s more than an amenity. We need to preserve and protect this area. We bought into the idea of the resort community. What you’re considering will open the floodgates to willy-nilly building,” said Steve Thomas, a resident of Thanksgiving Point.

Andrew Bybee from Stack Real Estate approached the Planning Commission with a request to review the Development Amendment for Chapter 28, clarifying the current and future uses in the Resort Community (RC) zone.

“We want to table this tonight and bring it back when we’ve completed our traffic studies. We’re here to answer questions and get feedback from residents. Every piece of land would be defined with this new clarification. We’re not trying to increase the residential area, but we are trying to increase the density. The results of all the studies and workshops we’ve done indicate that this is the best spot for a TOD. If we put a live component [residential housing development] here, people won’t have to drive to work and the traffic won’t be increased,” said Bybee of the plan to add 1800 housing units to the area.

“Don’t reduce the resort community, expand it! Make this something Utahns can be proud of for years to come, like Central Park. We don’t have to provide a place here for all the people that are moving to Utah. There’s plenty of room in the state. If we allow it, developers would build on every square inch of land. Let’s demand open space for our grandchildren and the animals who still come around,” said Jeff Scott, a resident of Thanksgiving Point.

After so many strong, negative comments, Andrew Bybee came back to the microphone to assure the Planning Commission and residents that Stack was not trying to be deceptive. “We’re going through the front door on this. If we’re wrong about the traffic not increasing, we’ll admit we’re wrong.”

The item was tabled until the June 13 Planning Commission meeting.