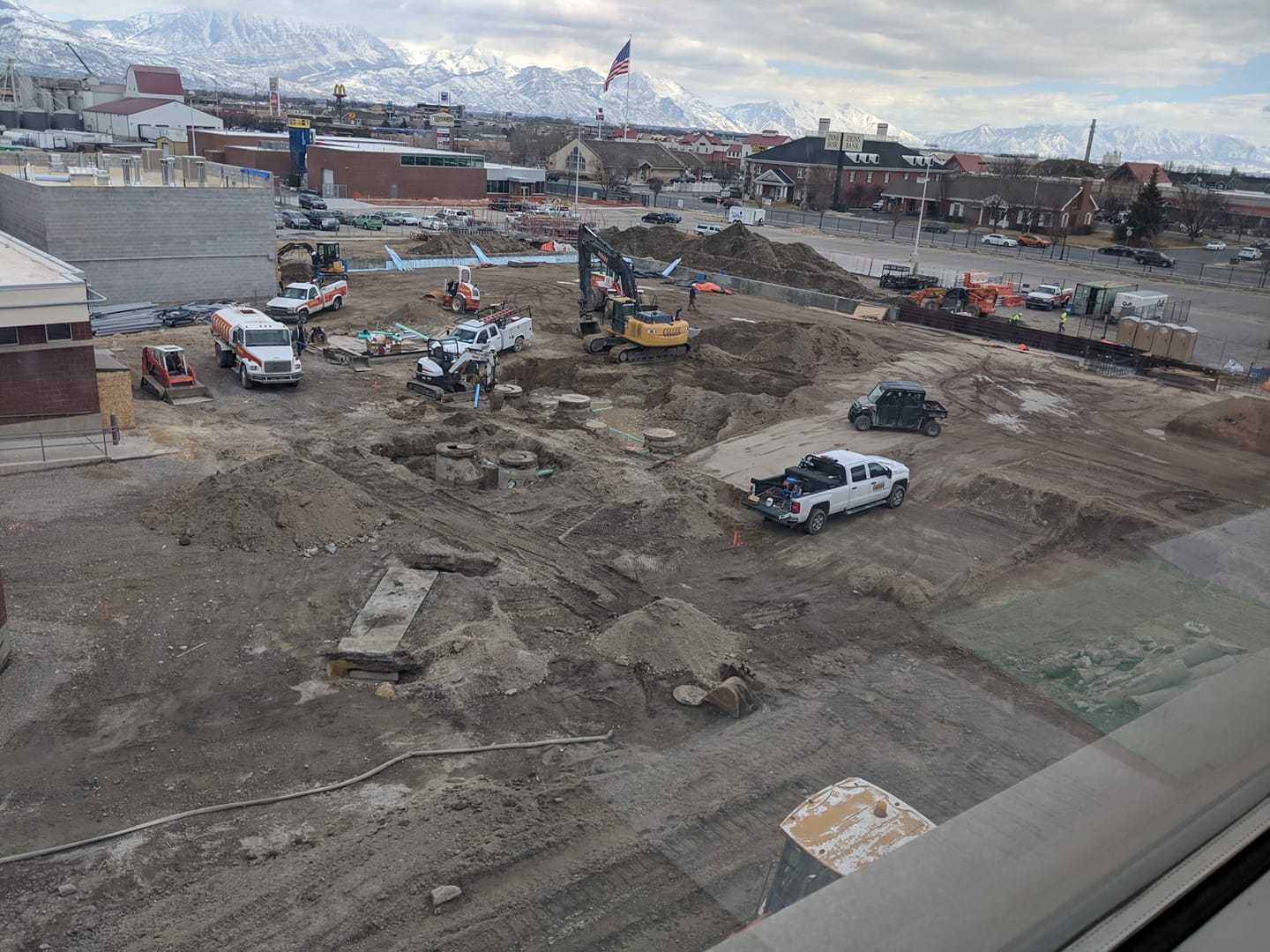 The reconstruction and update on Lehi High School is moving along according to plan. The parking is “as bad as it’s going to get,” and the project team is still trying to figure out where the kitchen will be for the kids next year during the third phase of the construction, according to LHS Principal Doug Webb.

“Phase two is great and we’re on track pretty well,” Webb said. “The rain had pushed us back, but we’ve been able to catch up.” Webb is part of a weekly meeting with the contractor’s project manager and Alpine School District’s project manager and is involved daily with the project. “I can’t say enough good things about the architect and the construction crews,” he said. Webb added the support from parents, PTA, and school councils have been “amazing.” “It’s a joint venture for everyone,” he said.

Phase II is well underway. The main goals of this phase are the complete demolition of the old vocational building and compound. New construction includes the new main gym, an auxiliary gym, locker rooms, athletic facilities, a three-story classroom wing, and the new auditorium and performing arts classrooms.

Phase III is set to begin around February 2020, and Webb said it’s the most complicated part of the entire reconstruction. According to the ASD website, Phase III will involve the demolition of any remaining portions of the old building, including the cafeteria. The construction will include the second auxiliary gym, commons area and cafeteria, counseling center, media center, and a two-story classroom wing.

When asked about how the school plans to deal without a cafeteria during Phase III, Webb said they have a plan. He said the cafeteria will be in the satellite located outside, but they’re still working on where the kitchen and food prep areas will be. “We don’t know if we’re going to be cooking here or cooking somewhere else, but we will have a cafeteria for kids to eat. We’re still trying to figure out the food portion,” he said.

Despite the center of the high school being demolished and rebuilt, Webb points out that the students will have a brand-new gym facility, a three-story building, and an auditorium. “All those things will be done as we go to that middle facility. It will be a challenge, but at the same time, the students will have this great big venue as well,” Webb explained.

While there have been community comments regarding the parking surrounding Lehi High, Webb said the parking is not going to get worse than it is right now and appreciates the patience of the surrounding community.

“Our parking is as bad now as it’s ever going to get. It will improve with each phase and when we’re done there will be more parking than Lehi High School has ever had,” Webb said. He added the partnership with the Church of Jesus Christ of Latter-day Saints has been helpful. ASD is paying for insurance that allows school parking within the Church’s parking lot.

Webb adds that even when there are parking spots, students and others tend to not park in the right place anyway. “People park in the wrong places even if there are other places to park,” he said. Webb also said the gravel parking lot at the end of 300 North will be shut off for good starting the first of summer. “We’re recovering those parking spots elsewhere,” he explained.

Very optimistic about the project, the district’s involvement, and the future of Lehi High School, Webb said, “Lehi is such a great place. This rebuild is going to be great for our community and we’re going to have a beautiful school.” Alpine School District did not respond in a timely manner for this article.