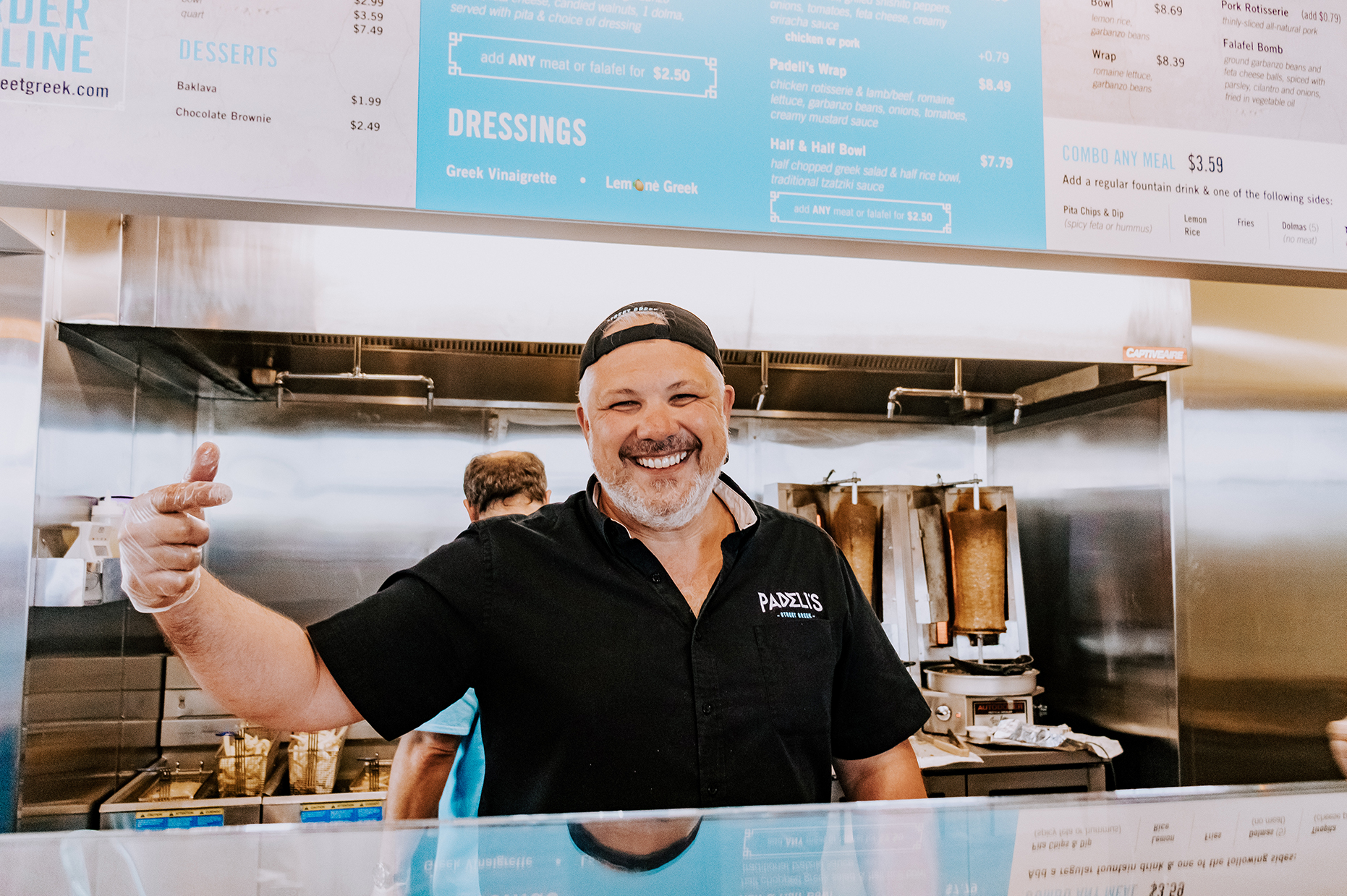 A new kind of taste has arrived in Lehi. The second of its Utah-originated fast-casual locations, family-owned Padeli’s Street Greek opened its doors to the public with a grand opening Thursday, May 9. The Greek eatery, located at 2975 Clubhouse Drive in the Thanksgiving Point area, brings a modern/contemporary twist to Greek classics. You’ll find a fresh dining space with traditional Greek flavors that excite and enchant your taste buds. With artistic stylings themed around the Greek culture, including classic Greek music and a mural of Zeus, Padeli’s transports diners to the ageless streets of Greece.

Padeli’s Street Greek introduced Lehi’s newest dining experience at their grand opening, offering a free entrée to visitors. This brought an exceptional turnout with hungry guests waiting in a line that extended outside the building. After guests received their food, they were encouraged to take a picture with the Padeli’s backdrop and spin the wheel for a prize ranging from a $10 gift card to a free T-shirt.

The atmosphere was lively and fresh, but the food was the best part. The menu offered entrée selections such as gyros, wraps, bowls, and salads. I opted for the classic Greek gyro (YEE-ro) filled with slabs of beef and lamb roasted on an in-house vertical spit. With the build-it-yourself option, I chose to top my gyro with traditional tzatziki (a Greek yogurt sauce), diced tomatoes, sliced pepperoncini, and feta cheese. The meats were tender and juicy and paired well with the tzatziki sauce. The creamy mustard sauce enticed me, but I ultimately chose to stick with the traditional tzatziki. I combined the gyro with a side of pita chips and hummus. The pita (bread-like flatbread) was soft and made a lovely accompaniment to the traditional hummus.

After perusing the menu for a dessert to finish the meal, I found two options, Baklava or a chocolate brownie. After a quick Google search, I discovered that Baklava is a rich, sweet dessert pastry made with layers of phyllo, filled with chopped nuts, and sweetened and held together with syrup or honey. I elected for this option and was glad I did. My friend and I agreed it was the perfect end to our meal. The flavors melded together smoothly and the crisp texture of the layers of phyllo melted in your mouth due to the perfectly balanced honey. From the Greek music that serenaded us when we arrived, to the family-style service and delicious Mediterranean menu offerings, Padeli’s Street Greek brings a new and inviting presence to Lehi.