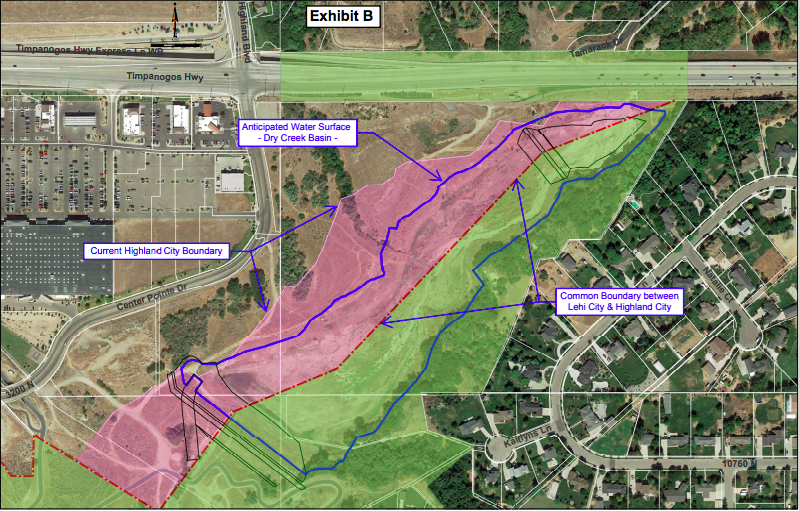 During Pre-Council and regular City Council meeting, the Dry Creek Reservoir project progress was discussed. Lorin Powell, Lehi City Head Engineer, reported that an agreement had been reached with Highland City. He stated, “The agreement really includes three projects: Dry Creek Lake, the trail system, and improvement of the 1200 East roadway. $400,000 is needed to continue with the project. We need to have some flexibility as we negotiate agreements.”

Lehi citizen Chris Bowerbank spoke regarding the necessity of working out details of jurisdiction for police and fire support when the reservoir is operational.

UDOT representative, Craig Hancock, gave City Council members an update on the I-15 Tech corridor project. “We have completed a year’s worth of work with the completion of Triumph Bridge in November. For this year, we plan to replace a lot of pavement on I-15 with cement. We feel good about the movement of traffic in the construction zone.”

The UDOT project slated for this year will be the SR 92 Interchange. “We will begin underneath and then continue until the project is finished,” said Hancock. The 2100 N. Interchange will be built next along with the State Street bridge. “Overnight closures on this project will begin April 14 and continue for two weeks. This project should be done by the end of the year,” continued Hancock. “The Lehi Main Street Interchange will have the deck replaced with concrete. There will be nightly lane closures as needed. The 300 West bridge construction will begin April 22. There will be a full closure of this intersection for several months. “The road will be lowered, and reconstruction of the bridge completed,” said Hancock.

For information about these projects call: 844-401-8324 (Tech) or online at techcorridor@utah.gov

Kim Struthers, Director of City Development, discussed a new state provision to protect agricultural areas in municipalities. The new law prohibits agricultural properties from being taken by eminent domain or subject to litigation. Four areas in Lehi had been designated as agriculturally protected areas. These properties cannot be re-zoned if they are in a protected zone. Two of the properties have already been developed and only two remain protected. If no action is taken these two properties, they will continue to be protected for 20 years. One of the properties has been purchased by Alpine School District for a future high school building site.

During regular City Council meeting the following items were all unanimously approved:

Lehi City Financial Department also received the Distinguished Budget Presentation Award. Shea Rutenbeek was given this award for being the lead on this project. Lehi City Council members unanimously adopted a tentative budget for the 2020 fiscal year. The final budget will be adopted sometime in May or June. Dean Lundell, Lehi City Financial Director, explained that in adopting the tentative budget the Council will also adopt a series of Guiding Principles associated with establishing financial policy.

Lehi Roads to Close for Reconstruction