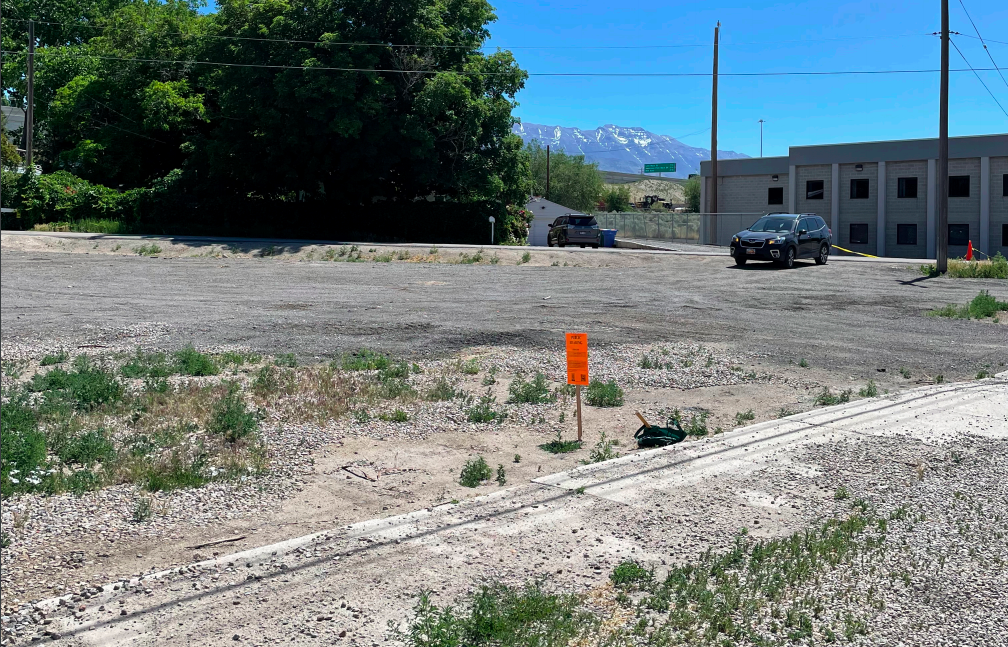 The Lehi City Planning Commission met for their regular meeting in City Council Chambers on Thursday, July 8. Lehi residents attended in person, presenting alternatives to a concept plan for an awkwardly shaped lot on State Street.

“I have spent countless hours trying to come up with a concept that will work along the State Street corridor and with the odd triangle shape of the property,” explained Dennis Schoonover, owner of the plot and the former police station next to it. “I found the best way to develop the property and give us a return on our investment is to own and operate two small drive-thrus.”

Schoonover’s investment partner, Aaron Wagner, went on to explain, “The pandemic really accelerated drive-thru opportunities. There’s been a huge push for these types of products.” Wagner described one drive-thru as a chicken place that serves breakfast sandwiches in the morning and chicken sandwiches in the afternoon called Early Bird/Dirty Bird. The other concept, Hello Sugar, would serve mini donuts and other treats.

The two drive-thru concepts are approximately 1,000 square feet, with patio areas on the west sides for outdoor dining. Separate drive-thru facilities will surround both buildings and allow for stacking within the parking lot areas. The plan also has a drive aisle between the buildings and State Street, which would require an exception to the zoning, Urban Village District.

Lehi resident Cory Gurney attended the meeting and presented aerial photos of the similar-sized Quench It!, a small drive-thru soda shop on State Street. “I spoke to a man who lives next door to Quench It! and asked him what it’s really like. He said he wishes the entrance was off State Street, that a lot of trash blows into his yard and cars are honking their horns all day,” said Gurney. He and the other homeowners near Schoonover’s property asked for a cement wall or similar barrier on the road between the properties.

“I’m not against the drive-thru, but these guys are downplaying the traffic here,” said Dave Barnhart, a resident near the proposed new businesses. “My driveway exits onto the drive-thru lane. How am I going to get out if there’s a line of cars? Where is the snow going to go in the winter?”

Another nearby resident suggested Schoonover and Wagner place the entrance to the drive-thru lanes at the end of 600 West instead of at the front. Cory Gurney also presented a drawing of the property with options that would be less invasive to the neighbors.

“These people have lived next door to a police station for all these years – a few lights coming in and out is not nearly as disruptive,” countered Aaron Wagner. “It would be way more dangerous to have an entrance off State Street. They need to see that this is as good as it gets as far as what could go on the property with the zoning.”

“I’m not dismissive of the neighbors’ concerns, but they have to come off 600 West for the drive-thru lanes. This is just the concept phase – they’re here to get feedback. Once we get past this, we can get into the nitty-gritty details,” said Commissioner Matt Hemmert.

“This is really the only thing on State Street that comes close to fitting the Urban Village Development [zoning]. Maybe this is a step toward making State Street more of an Urban Village,” said Commissioner Heather Newall.

“I disagree. This is a destination people have to drive to. It’s not walkable at all,” said Commissioner Tyson Eyre.

The commission forwarded a favorable recommendation to the City Council on the Lehi Drive-Thru concept with one negative vote from Eyre.

The other items on the July 8 agenda that received positive recommendations or approval from the Planning Commission were:

Lehi City’s request for an amendment to the Development Code Chapter 26 on Accessory Uses clarifying the maximum building heights for accessory dwellings.

Joan Gurney’s request for a zone change from TH-5 (transitional holding) to R-1-22 (residential/agriculture) on one acre at 1199 West 900 North.

Ivory Development’s request for preliminary subdivision review of the Holbrook Place Phase 5 and 6, a 102-lot residential development at 2700 North and Twin Flower Way.

JDH Development’s request for review of a zone change for Vivian Estates Phase 4, 13.4 acres at 2200 North 400 East changing the zoning from TH-5 to RA-1.

X Development’s request for review of a zone change from A-5 (agriculture) to Neighborhood Commercial and R-1-Flex (residential) on 20.10 acres of property at 2100 North 2300 West.