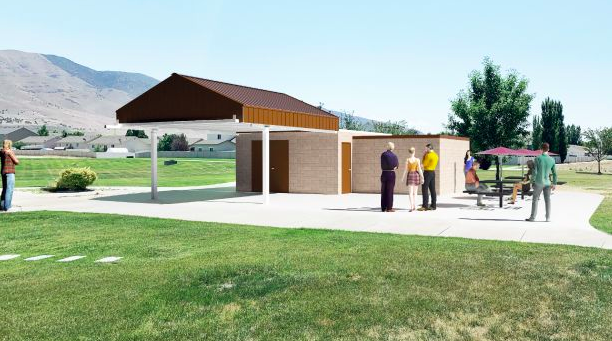 “I grew up in the slums of the Philippines in a hut made of grass and bamboo,” said Astrid S. Tuminez, president of Utah Valley University (UVU). “On clear nights, I could see the stars through holes in the roof. Stargazing was an important part of my life. I didn’t have radio or television; I only had the stars. They helped me imagine what I could be.”

President Tuminez joined Tom Westmoreland, mayor of Eagle Mountain, and William Marks, the community development regional manager of Facebook, announcing plans to create a stargazing park at Walden Park in Eagle Mountain at a press conference on Thursday, July 22. An initial $250,000 grant from Facebook will fund the construction of a small observatory and improve the existing park.

“Part of our mission at Facebook is to promote the long-term vitality of Eagle Mountain and the people and businesses in Utah County, and this is just a small part of that,” said Marks. “There’s so much to learn and discover about the world and the universe around us. To be able to help teachers and students this way means the world to the Facebook team.”

The Physics Department at UVU also has a two-year grant for academic workshops at the observatory. “We were feeling kind of sad that no one has asked us to look through the telescope,” said a smiling Joseph Jensen, professor of astronomy at UVU. The solar scope has a special filter that allows viewers to look at the sun, blocking 99.999% of the sunlight and making it possible to study hydrogen on the sun.

“Can you guess how many earths you can fit in the sun?” asked Jensen to the crowd gathered around, waiting to take a turn looking through the solar scope. He didn’t wait long before revealing the answer–1.3 million. “The sun is a lot bigger than most people realize,” he continued.

The Facebook grant will pay for a $50,000 telescope the UVU Physics Department is anxious to use at the future Eagle Mountain observatory. “You’ll be able to see the spiral arms on the Andromeda Galaxy, globular star clusters, you’ll be able to see the planets better than you’ve ever seen them. It’s going to be incredible,” explained Cody Peterson, an advisor in the Physics Department at UVU.

“We have a dark sky ordinance – all new buildings must have lights pointing down. A stargazing park is a perfect fit for Eagle Mountain,” said Eagle Mountain City Councilmember Melissa Clark.

“We really wanted to think outside the box and come up with something creative and bold. Everyone started gravitating to this concept, and it gained more energy when Facebook got involved,” said Mayor Westmoreland. “Facebook has been a real partner, not just a token partner. One might expect a company that big just to write a check and be done, but that’s not the case with them. They want to be the best partner with the city.”