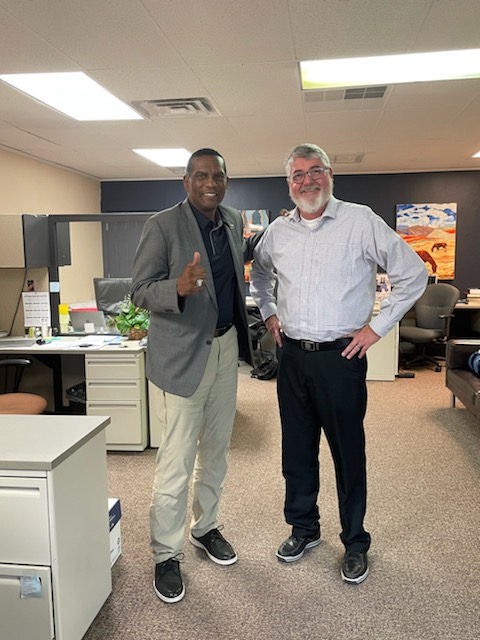 Utah Congressman Burgess Owens and his staff, along with Lehi Mayor Mark Johnson popped into several Lehi businesses last week to shake hands, talk politics, and learn a little more about one of the largest cities in his district. The group visited the offices of the Lehi Free Press and discussed entrepreneurship, Washington D.C. politics and the unfolding crisis in Afghanistan.

Owens discussed immigration challenges at the southern border of the United States, drawing comparisons to Afghanistan. “Afghanistan is just the latest exclamation mark. I spent some time down in the Darién Gap–it’s the jungle a little bit south of Panama. To have the misery that people go through just to get through a border, just to get started, is an amazing thing to see. Afghanistan is just bringing back to the forefront that there’s misery going on with these [Biden’s] policies. Afghanistan is another good example that we see — good people, Americans, thousands of them, are stuck and there’s no plan.

According to Owens, “The takeover of Afghanistan is nothing short of horrifying. My heart breaks for the innocent women, children, and families facing the sheer terror of reality under the Taliban. Three months ago, I supported bringing U.S. troops home, contingent on a clear plan that tackled increased terrorist activity while protecting national interests and personnel on the ground. Instead of taking responsibility for this catastrophic failure of strategy and leadership, President Biden doubled down on his administration’s indefensible decisions while abandoning our Afghan allies and endangering national security.”

When discussing the mayhem in Afghanistan, Owens suggested the reason was a lack of detailed planning on the part of the President and his advisors. “Obviously, he doesn’t listen very well to experts. That’s one thing. The other part is even those around him should’ve figured out if this doesn’t work, what are our next steps? At some point you delegate to other people contingency plans. They bring in their expertise so we can put it all on the table and say, ‘this is what I’d like to see happen but what if?’  No one sitting at the table seemed to ask the question,” said Owens.

Utah Governor Spencer Cox wrote an open letter to President Biden welcoming refugees from Afghanistan. Regarding Cox’s letter, Owens said, “It is the spirit of Utah to serve others. As this humanitarian crisis continues to unfold, I support the governor’s efforts to welcome the Afghan allies who risked it all to fight alongside U.S. forces.”

Owens also discussed his view of long-term Washington politicians. “You’re seeing results of 40, 50 years of what politicians become when they have no clue about the real world. Think about how most of us go through life. The decisions we make, whether it’s the job we take or the business we decided to run, have consequences on how we deal with it. We have to be a very good employee if we want to keep that job. If not, we have to find another job. If we run a business, we have to be a good employer and a good provider of services. If we don’t, somewhere we’re going to have to go out and find other options. Politicians come in, they get started, and four years later, the same place, with more wealth and more power.”

Regarding Biden’s foreign policy in Afghanistan, Owens said, “what you’re seeing is the result of politicians who are clueless, who’ve made a good living being politicians, now put in office that have consequences. And I can’t even imagine the misery that those people in Afghanistan will live with. They had a chance to go from literally being a Fourth World country (I’m not going to say even Third World, they had no Internet), but they had Internet, they were communicating. They had women engaged and all the things that happen with growth, we go from there back to Stone Age. It’s sad to see.”