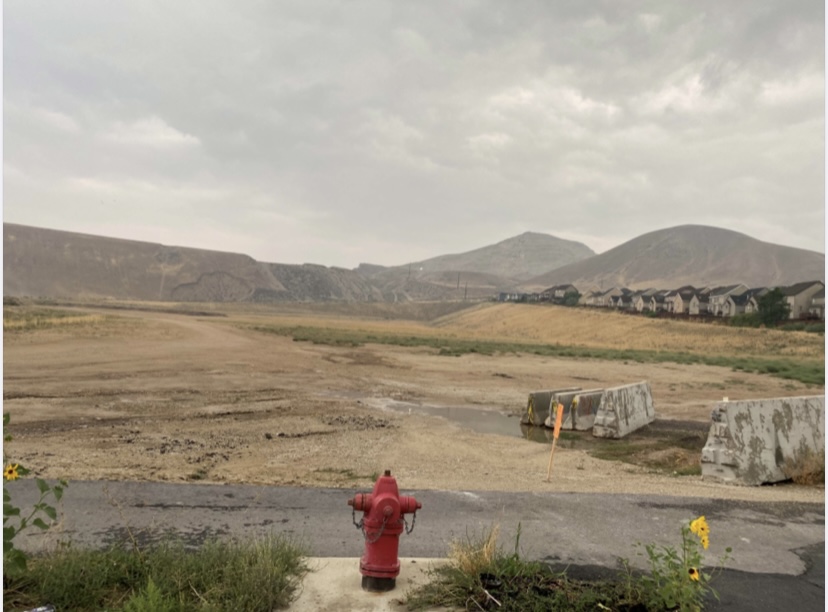 The Development Review Committee (DRC) noted that utilities on the property were a critical issue. The developer cannot bring a final plat proposal to the City Council until the well and transmission line are in place.

Jared Morgan representing GWC Capital explained some of the amenities for the development. “We’re most excited about the trail system. We’ll have an amphitheater that is more like a community center for events like a farmer’s market and concerts and an ice rink in the winter. That would be managed by the HOA, not the City,” said Morgan. The amphitheater in question is approximately a quarter of an acre.

“This is west facing and brutally hot. I know you said you don’t want irrigation up there, but even native grass needs irrigation to get established the first few years. I wouldn’t plan on not irrigating at all if you want anyone to use the park,” commented Commission Chair Abram Nielsen.

A woman named Heather represented hang gliders who frequent the Flight Park State Recreation Area just above Vistas at the Point during the public hearing on the agenda item. “We’re very interested in the wind impact and the landing area. Putting a high rise right in front of our landing zone is very dangerous and problematic for us,” she explained. “This is a world-renowned site. We want a proper wind impact study done.”

The commissioners continued to discuss the proposal and Morgan came back to the podium several times to answer questions. “This is in the very conceptual level right now,” he reminded them.

“My concern is saying yes, getting a negative report from the wind study and having foundations poured already,” said Commissioner Greg Jackson. The Planning Commission cannot require a developer to do a wind study, they can only recommend it.

The motion to give a positive recommendation to the City Council for GWC Capital’s proposed preliminary subdivision passed unanimously.

The following items were also given positive recommendations or final approval by the Planning Commission on Aug. 26:- Yesco’s monument sign EMD upgrade for All About Fuel & Food at 1750 West Main Street.- Ivory Development’s request of the RAAS zone change, amending the zoning on five acres from TH-5 (transitional holding) to R-3 (high density residential) located at 1850 North 3600 West.- DR Horton’s request for review of TH-5 (transitional holding) zoning in the Micron East Anenxation, 111.51-acres at 1800 East 4800 North.- Kevin and Wendy Jeffery’s request for a zone change from RA-1 (residential/agriculture) to R-1-Flex (residential) on 1.24 acres at 680 West 1200 North.- Gardner Company’s request for review of the Hardman Corner General Plan Amendment, changing the designation from C (commercial) to C-H (heavy commercial) on 16.78 acres located at approximately 2100 North Redwood Road.- Jennifer Swingle’s request for approval of a conditional use permit for a detached accessory dwelling unit at 1321 North 2020 West.- Matthew Jorgensen and Jason Rickards request for a zone change from 1-5 (agriculture) to R-2 (medium density residential) on 2.82 acres at 2402 West Main Street and the 6-lot residential development located on the property.- Lehi City’s request for a Development Code amendment to Chapter 10, Development Applications and Procedures, adding a new allowable combined action.