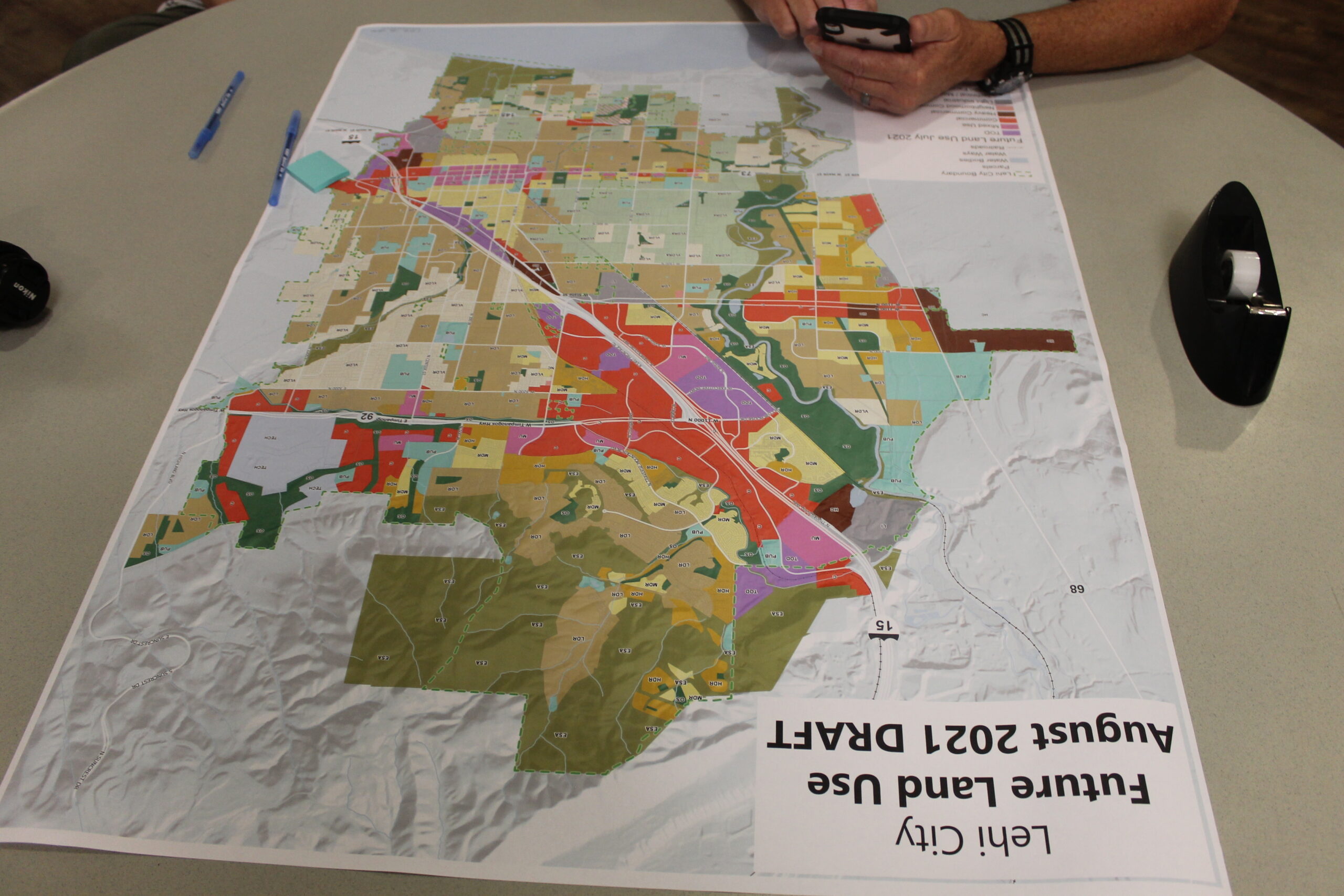 Lehi City Planning Commissioners were unanimous in all their recommendations on Thursday, Sept. 23, including a negative recommendation for higher density on property surrounded by half acre residential/agriculture land. The commissioners also reviewed the updated General Plan and gave feedback to city staff.

Lehi City presented the updated General Plan to the commissioners on Sept. 23. “The goal of this new General Plan is to provide more predictability to developers and landowners. It will help stabilize land values and provide more consistent designations that won’t just be amended in a later meeting,” said Sierra Pierson from the Lehi City Planning staff.

The new General Plan has a new Mixed Use Overlaydesignation and Transit-Oriented Development (TOD) is now a designation, not just an overlay. Commissioners Roger Ellis and Abram Nielsen asked about newly designated Environmentally Sensitive Area (ESA) on the map.

Community Development Director Kim Struthers clarified that landowners can only have five-acre lots on land in an ESA. Nielsen asked, “If the parcel is half and half ESA and something else, how does that affect their ability to develop it?”

“This is different than zoning, so you can use a broad brush,” explained Struthers.

“If we’re in a position where we’re dividing up their parcel, I’d be inclined to acquiesce to whichever way they want to go with the property. That sort of ambiguity to a property owner is just unfair,” said Commissioner Greg Jackson.

“We tried to go along property lines. We’ll clean that up if you see areas that need to be changed,” answered Struthers.

Lehi City staff and the commissioners discussed the Thanksgiving Point area and removing the Resort Community designation and making part of the area a TOD.

“When Thanksgiving Point adopts a new area plan, we’ll update what we’ve got. We try to reflect what is in their area plan,” Struthers continued. “We have specific densities that go with this area and when we analyzed it, we determined we could support 1,000 units.” Thanksgiving Point is currently updating their Area Plan, proposing approximately 450 affordable housing units and approximately 5,000 residential units.

“They are required to have an Area Plan and they have to go through the process to amend that plan. The TOD designation gives them the option, not the right,” said Struthers.

“I’m concerned about the traffic at Thanksgiving Point – it’s already at failing levels. What will a thousand more units do? We shouldn’t give them this designation until they solve the traffic problems,” said Commissioner Heather Newall.

The commissioners and staff discussed zone changes near Pioneer Crossing in the General Plan and possibly allowing drive-thru windows for pharmacies in the Neighborhood Commercial zone.

The Planning Commission voted to give a positive recommendation to City Council on Lehi City’s new General Plan.

Toby Cordova requested an amendment to the General Plan on 5.1 acres at 1550 South 1100 West, changing the designation from VLDRA (very low-density residential agriculture) to LDR (low density residential). Cordova presented the concept for a 16-lot residential subdivision on the property.

“I’m disappointed with this proposal. We chose to move here because of the large lots around us. We’d love to keep the neighborhood the way it is,” said Lee Tyrell, a resident and neighbor.

“This property is surrounded by VLDRA on all sides except kitty-corner across the street. This would be an island of LDR,” said Commission Chair Abram Nielsen.

“The density next to this will have to mirror this to make a complete horseshoe. It would affect future proposed changes if we approve this,” said Commissioner Brent Everett. “We’re losing our city identity by eliminating these larger lots. Why not keep what we can?”

“It feels inconsistent to change the General Plan if we don’t have a really good reason. The City has spent a lot of time and made a great effort to add these designations in appropriate areas,” added Commissioner Newall.

Commissioner Jackson agreed, “We need to have cause to change the General Plan and I don’t see cause here.”

The commissioners unanimously voted to give a negative recommendation to Toby Cordova’s request to amend the General Plan, and his 16-lot residential subdivision at 1550 South 1100 West.