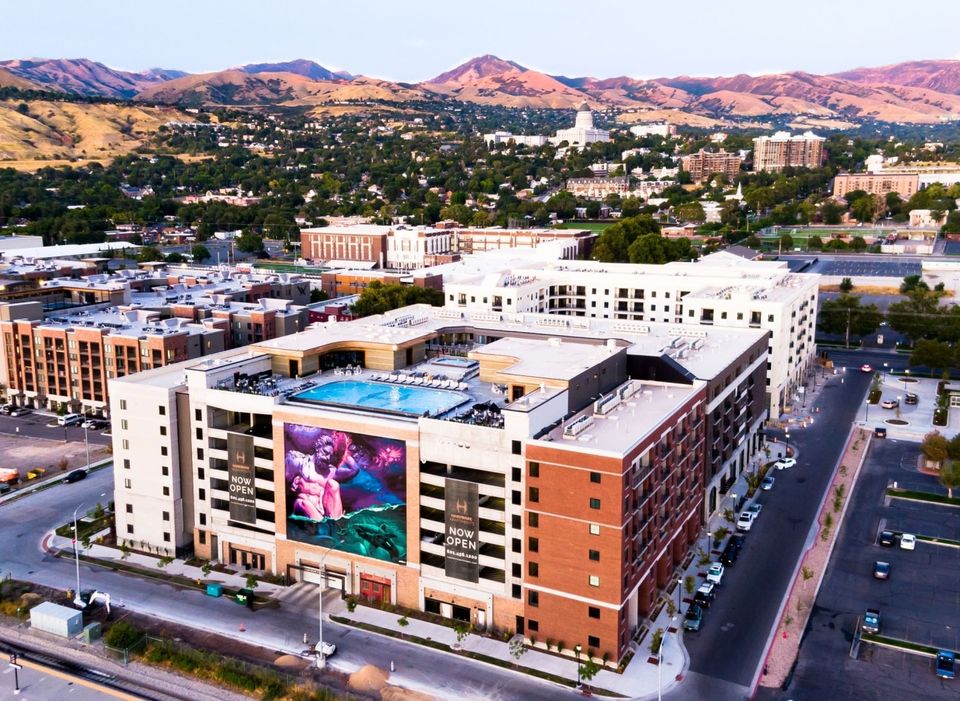 Salt Development proposed a zone change and concept plan for a Transit-Oriented Development (TOD) on 14.28 acres at 2601 Slipstream Avenue. Their plan is a building with five floors of residential units, a parking garage with seven floors of parking and a rooftop deck with a pool and gym for residents. There are internal commercial pads for a grocery store or bakery.

“What happened to the City’s resolution to pause on considering TODs? Why is this even before us if there is still a resolution,” asked Nielsen.

Lehi City Development Director Kim Struthers explained that City amended the resolution to consider TODs that met certain conditions. “This developer is contributing significant infrastructure that will solve bigger issues in the area, and they met all the conditions to be considered,” said Struthers.

“This is a massive building taking up the whole block with no through-ways. This doesn’t have the connectivity or walkability for pedestrians that a TOD should have,” said Nielsen. “To me, this doesn’t fit the City’s vision for a TOD. It’s an apartment development, not a TOD.”

Ethan Bedingfield from Salt Development said, “We’re very picky about where we build. This site is exciting – we’re trying to create a destination with high-end restaurants and entertainment retail.” He referred the commissioners to another Salt Development, Hardware Apartments in Salt Lake City, as an example of their work.

“We try to design buildings based on the need surrounding it. These apartments are for college graduates who are making good money in the tech industry at Silicon Slopes. Our vision is to create a sanctuary for them after working 60-hour weeks,” added Thomas Vegh, President and CEO of Salt Development.

Commissioner Heather Newall asked about the price difference between the Salt Lake City apartment and the proposed development in Lehi. One bedroom Hardware Apartments rent for more than $2,000 a month.

“The price is a little lower, but we feel like it’s a step up in every other way. We’re not an affordable housing builder,” Veghanswered.

The Planning Commission voted to give a positive recommendation to the City Council on Salt Development’s request for a zone change and the concept for their Compass Point Apartments with Commissioner Nielsen, the only dissenter. Nielsen explained his vote, “This is missing TOD elements, and it’s not supporting the community, only the residents.”

Several residents went on record to share their concerns about Toby Cordova’s request to change the zoning on 7.16 acres near the Sports Complex at 1610 West 700 South from RA-1 to R-1-Flex. Most of the acreage is an open field right now, and Cordova proposes developing the land with single-family homes in various lot sizes, keeping the two existing homes formerly occupied by the Bushman and Felt families.

“Putting 19 homes in such a small area is turning Lehi into a metropolis. Our farmland is being destroyed with this rapid, unchecked expansion,” said Kevin Clay, a neighbor to the proposed development. “We want to keep the rural, family-oriented community, I’m begging you.”

“We’re in a drought year. The City needs to be an example of conservation. I feel they’re doing the opposite here,” added Colin Peterson, another nearby resident.

“I’m concerned about water rights and lot sizes. This needs to fit what is already there. We have a lot of foot traffic in the area with kids,” said resident Paul Allred.

Lehi City engineer Ross Dinsdale explained the slight difference in water rights between R-1-Flex, which allows for a variety of lot sizes for single-family homes, and R-1-12. “In a high-density zone, we use more culinary water and less secondary water. For half-acre lots, you have more secondary and less culinary,” said Dinsdale. He assured concerned residents that Cordova did not get a special deal on the water requirements.

“We’ve had 21 straight years of drought in Utah. The City has been doing its best to conserve water, and we know that agriculture uses the most water. The Planning Commission can only determine if developments meet code and are legal,” added Commission Chair Abram Nielsen.

“The R-1-Flex zone is allowed in the General Plan for this area. It’s been an island of agriculture for a long time,” Nielsen continued. “The majority of growth in Utah is internal, people’s kids and grandkids moving here. From my viewpoint, I don’t see how we can deny this.”

The following items were approved or given positive recommendations by the Planning Commission on Sept. 9:

– Jami Ray’s request for a zone change on the Lamb property from R-2 (medium density residential) to MU (mixed-use) for an antique store.

– Luke Chamberlain’s request for a zone change at 57 South 500 West from RA-1 (residential/agriculture) to MU (mixed-use) for his State Farm Insurance business.