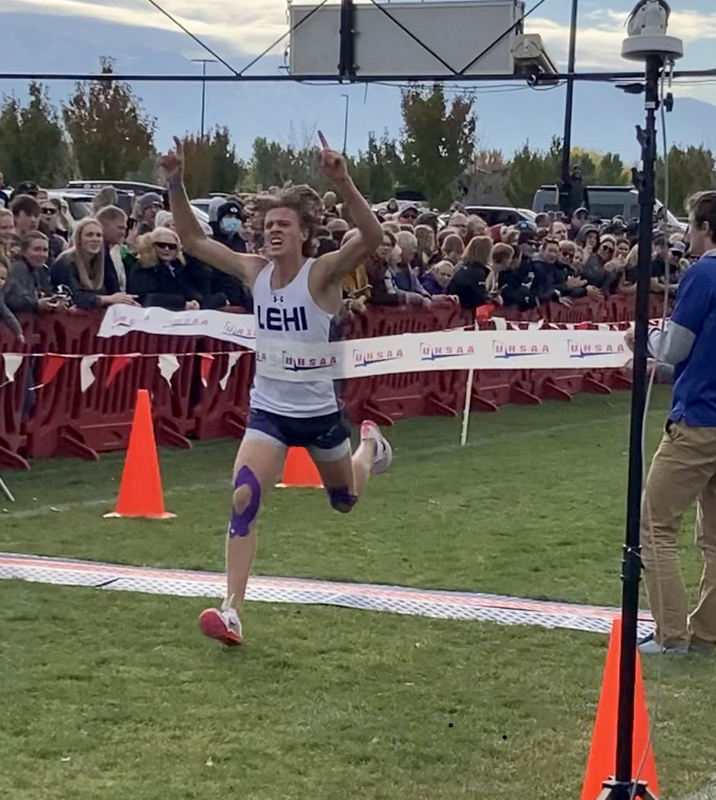 In the final official event of his prep cross country career, Pioneer senior Jefferson McMullin earned the 5A gold medal, literally running away with the title. He finished in 15:06.8, more than 15 seconds ahead of the next closest competitor at the Regional Athletic Complex in Rose Park.

The Pioneers finished fourth overall in the boys division, while the girls team came in seventh in the earlier race. Springville won the overall girls title by a huge margin.

Junior Caroline Moon, who was only available to run some of the time because she was also the leading player on the Lehi High School tennis team, was the top girls finisher for the Pioneers in 12th place at 19:06.7.

In the boys race, Mountain View easily won the team title with 88 points, followed by Timpanogos at 156, Orem at 167 and Lehi with 188 in a relatively tight cluster. The next team was 47 points farther behind with another group of squads that had fairly close scores.

McMullin said winning the title became his goal after the state race last year. He finished 11th, which he called “decent,” but it wasn’t what he’d wanted or hoped for. He set his sights on doing whatever it took to make it his race this year.

“I developed confidence and faith in myself and the training that I put in,” he said. He described his race experience this way.

“At the beginning, for about the first mile, there was a tight pack with me. I made sure I was in the lead because I wanted to control the race,” he said. He stayed in front and after the first mile, he pushed a little to shake some of the pack.

The exception was Orem’s Tayson Echohawk, who has been his primary competitor all season. “Tayson stuck with me through the middle section, but after about 2 ¼ miles, I heard him breathing heavy and I pulled away,” McMullin said.

“I surged as I felt him fade, and I just kept pushing forward even though my body didn’t want to,” he continued. He set a personal record by about 15 seconds in the race. Echohawk was second by about that amount.

“I was really happy with my time at regionals; that was a breakout for me,” he said. “Today it was tough going south on the course because there was a pretty substantial headwind, but it helped in a way because I didn’t overheat like I had in some races.

“At least it wasn’t as bad as at divisionals,” he added, referring to the wind. “That experienced helped prepare me for today.”

McMullin named two factors in his success which might be surprising to some. The first was Echohawk. “I give all my respect to Tayson,” he said. “He gave me a force to reckon with and challenged me every single race. I’m grateful to him for his attitude and running ability. He’s absolutely amazing.”

The second was some of what he learned as part of Lehi’s state championship basketball team last spring. “I’ve reflected on that a lot,” he said. “That experience primarily gave me a really competitive drive and I learned that I don’t accept my second-best work.

“It also taught me about working forward as a team,” McMullin continued. He used that in his interactions with his cross-countryteammates as well.

“We’ve been building each other up; we got together a lot, especially the past couple of weeks,” he said. “We told ourselves that we’ve qualified together, so let’s go out there and perform.”

McMullin said one of the things he learned from Coach Quincy Lewis is that “all the work that people don’t see is what winschampionships.

“People won’t understand what I sacrificed to prove my own strength today,” he said. “It doesn’t matter though because I know what I did to show that I could do this and deserve to be in this position.”

Although grateful for his opportunity to be part of the basketball program, he elected not to continue with the team this year so he could put all of his focus on running.

“This was not an easy decision for me, but it helped a lot that Coach Lewis backed me up in my choice,” McMullin said. “He was at my race today and it meant so much to see him there supporting me outside of basketball.”

The victory today puts the Pioneer in an elite group of high school competitors who have won both a state team title and an individual championship.

However, he doesn’t have a lot of time to rest on his laurels. Up next are post-season opportunities, beginning with the Pre-Footlocker race Nov. 6 at Pleasant Grove. He also plans to compete in the distance events with the track team in the spring.