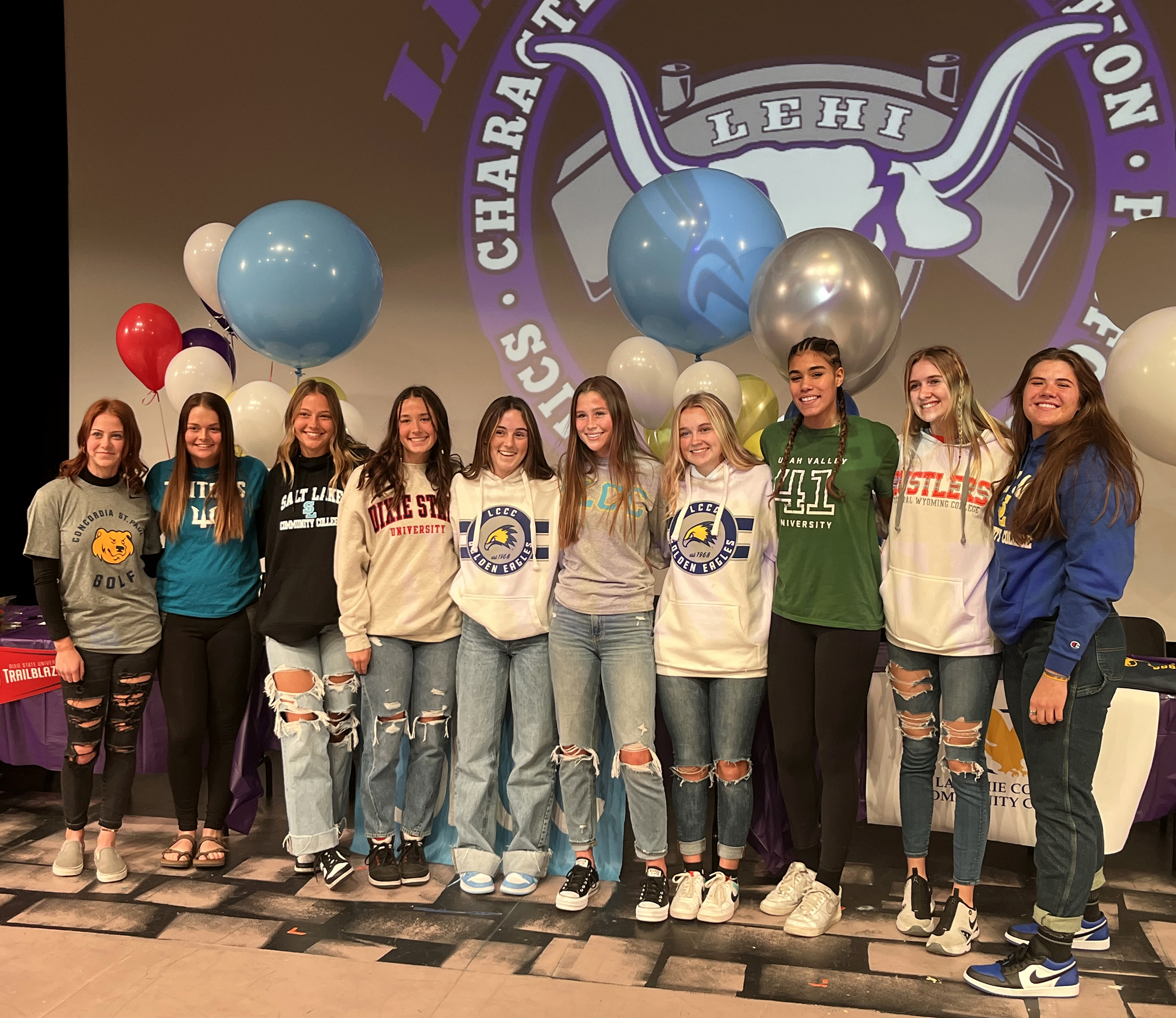 Ten girls at Lehi High School signed letters of intent on Nov. 10 to continue their playing careers after graduation. Five were soccer players, three were volleyball players, and there was one signee each in golf and softball.

The soccer signees include the entire Pioneer senior class from this year’s roster, who all accepted full athletic scholarships. The team finished second at the 5A state tournament this season.

Leading the group is the Region 8 midfield MVP, Ally Dahl, who was instrumental in her team’s success as the field general in the middle. She also tallied 10 goals and five assists and signed with Utah Tech University in St. George, formerly known as Dixie State University.

Salt Lake Community College is taking a pair of Pioneers, one at each end of the field. Defender Adysen Miller has received All-Region First Team honors and has a GPA of 3.94.

“Ady’s calm demeanor and ability to adapt in tough situations has been a big part of our success over the last four yeasr,” Graham said.

Joining her will be teammate Calista Wren, a forward who was also selected for the All-Region First Team and has a GPA of 3.15. She scored six goals with four assists this season. “Calista’s passion for our team and program is unmatched,” Graham said. “She is an inspiration to all of us.”

The other Lehi duo is heading to Laramie Community Collegein Wyoming. Defender Savannah Jones was named to the All-Region Second Team and has a GPA of 3.94. “Savannah has a competitive fire that doesn’t stop burning,” Graham said. She tallied three goals and three assists.

Defender Reagan Adair scored twice and had five assists alongside Jones on the back line. She has a GPA of 3.12. “Reagan’s love and compassion for her teammates is super impressive,” Graham said.

Headlining the volleyball group is outside hitter Avery Shewell, widely considered to be one of Utah’s best players. She is headed to Utah Valley University. A four-year starter for the Pioneers, this season she averaged about 4 kills, 1 ace, 3 digs and 3 serve-receives per set and also had 25 solo blocks.

She earned a 3.97 GPA and has been named to the All-State First Team three years in a row. “Avery had an impact the moment she walked into the gym,” said Coach Kolton Rader. “She hit the ground running and never looked back.

“She has helped the Pioneers to four top-10 finishes in the state tournament. She will find great success at whatever she does in life and is going to be a big name at UVU for years to come,” he said.

Outside hitter Amelia Gibson will attend Salt Lake Community College. She has a 3.99 GPA and tallied 198 kills, 46 aces, 160 digs and 400 serve-receives for the Pioneers this season.

“For as long as I can remember knowing Millie, she has talked about and wanted to play for SLCC,” Rader said. “She’s been to their camps and has been in contact with their coaches the whole time. I couldn’t be happier that she put in the work and got what she wanted.”

Middle blocker Adrianne Lyman is going to Central Wyoming College in Riverton. She earned a GPA of 3.76 and had 93 kills, 15 aces, 38 solo blocks and 19 block-assists for the sixth-place Pioneers.

“Adri is the comeback kid,” Rader said. “After suffering a bad injury in club causing her to sit most of her junior season, she put her head down and went to work regaining her strength, vertical and confidence in jumping and landing. She conquered all three of those things and had an incredible senior year.”

Golfer Brooke Anderson has selected Concordia University in St. Paul, Minn. to continue her career. As a junior, she finished sixth overall in Region 7 and was ninth in the 5A tournament,leading to a First Team All-State selection. She will finish her prep career as Co-Captain for the 2022 team this spring.

“Brooke has a tremendous work ethic and is driven to succeed,” said Coach Tele Wightman. “She is a great teammate and enjoys making everyone laugh. She is currently employed at Top Golfand is interested in studying and pursuing a career path in Physical Therapy.”

Softball pitcher Grace Humes will be going on to Edmonds College in Lynnwood, Wash. She has a 3.76 GPA and earned a 17-8 record in 30 appearances as the primary Pioneer pitcher, averaging one strikeout per inning.

“Grace is a real pleasure to have on the team,” said Coach Tim Kennedy. “She’s easygoing and coachable and had close to 20 colleges watching her. We are so excited for her opportunity.”