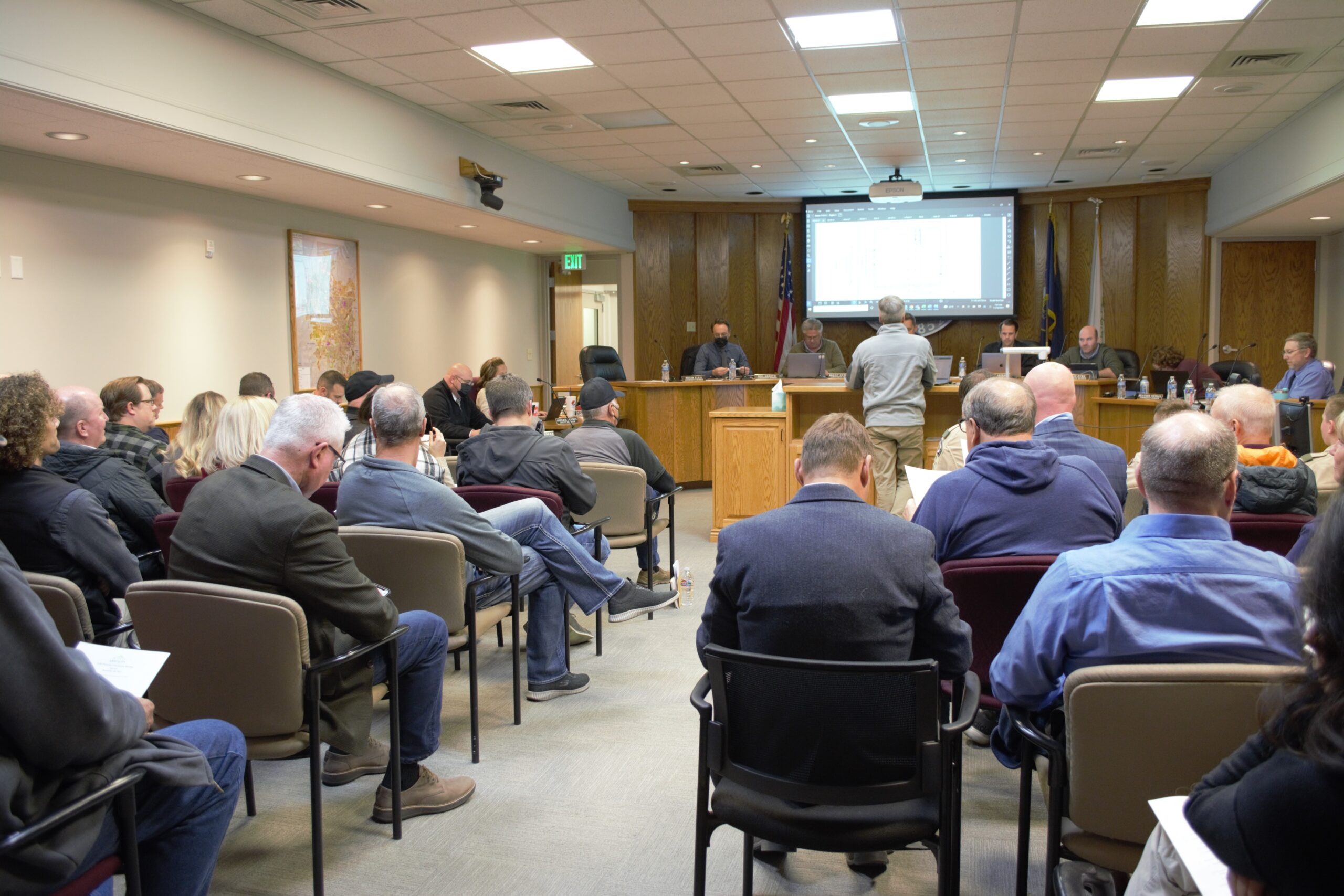 The Lehi City Planning Commission heard a proposal for the Thanksgiving Station Concept at its Thursday, Nov. 18 meeting in packed City Council Chambers. After more than four hours of presentation from Slopes Residential LLC, public hearing and discussion, the commissioners voted to give a positive recommendation for the concept to the City Council.

Slopes Residential LLC is a combination of Thanksgiving Point Institute, Stack Real Estate and Gardner Company. The three companies had representatives at the Planning Commission. According to Nathan Ricks from Stack Real Estate, they came to the meeting to receive feedback from members of the Planning Commission and the public before requesting an amendment to the Lehi City General Plan, to change zoning in the area from Resort Community (RC) to Transit Oriented Development (TOD).

“We’ve traveled all over the country and this is one of the top five areas for a true TOD,” began Ricks. He cited projections that Utah’s population will double in the next 30 years and 60% of the growth is internal. “We will need a four-fold increase in units near public transportation to meet the population needs. That’s not what developers are saying, that’s what experts are saying.”

Slopes’ proposal includes 5,398 residential units, 11-acres of park and open space, nine acres for a school, 500,000 square feet of office space, 52,000 square feet for a church and 300 rooms in hotel space on 115 acres at Executive Parkway and Ashton Boulevard. The building would occur in phases over the next 20-25 years.

“We have to have a big vision. The infrastructure will meet the vision over time,” said Ricks.

Lehi City staff reviewed a traffic study commissioned by Slopes and found that traffic around the future Thanksgiving Stationwould be addressed with a freeway on 2100 North by 2030. UDOT does not have that project planned until 2035-2040. The study also included future expansions or road widening including a north interchange lining up with Traverse Mountain Blvd, an extension of Clubhouse Drive to 3600 West, and a 3600 West extension to the north.

Lehi City Engineer Brad Kenison said, “It’s difficult to evaluate utilities for this many units.” The City has determined that it can handle utilities for up to 1,000 units.

Ricks explained Slopes’ justification for over 1000 units. “We’ve had the conversation about 1,000 units many times and we always respectfully decline. We believe it’s not the right thing to do. If we have only 1,000 units, we won’t have enough residents to get a grocer, restaurants or services. A thousand units means they’ll get in their cars and drive to Harmon’s,” Ricks explained. “The key to a successful TOD is lots of density in a three-mile ring.”

“We’re seeking sustainability for Thanksgiving Point,” said McKay Christensen, CEO of Thanksgiving Point Institute. “We can’t sustain our future based solely on the generosity of donors. We’re a non-profit. Moving forward we need an endowment to sustain this good thing going forward. A thousand units won’t do that.”

“I live next to Thanksgiving Point. The Ashtons have really invested in the community, and I appreciate that. I don’t think this is an infrastructure problem, I think this is a public trust problem,” said Commissioner Bill Hereth. “If the roads were working right now you wouldn’t have people here [attending the meeting]. If residents saw that the plans were working, that the government was functioning well, you wouldn’t have a problem. You tell us things and we don’t believe you. We don’t trust that it will happen. How can you build trust?”

John Makin from Stack Real Estate said they would agree in writing to build only the number of units that the infrastructure allows for each phase of development.

“We’re going to earn trust by putting it in writing and we’re not going to do anything until we deliver on what we said we were going to do,” said Makin.

Nathan Ricks from Stack Real Estate explained that the first phase of Thanksgiving Station is a 3.6-acre parcel known as the soccer field with approximately 350 units. They’ve already signed a lease with a climbing gym near the first parcel that would go up in the first phase as well.

Makin mentioned that the Utah legislature recently passed House Bill 217, the Housing Transit and Redevelopment Zone. The bill incentivizes developers to build TODs by giving them 80% of incremental funding to reinvest in infrastructure, mainly parking, for the first 25 years.

“As of last month, 50 % of Utahns cannot afford a home and 50% of us who already own a home couldn’t buy that home at today’s market rate. It’s not sustainable,” said Utah State Senator Jake Anderegg. He expressed support for the Slopes plan in concept. “This is not going to affect your home values. These are not the projects of the 70s and 80s, these TODs make property values go up.”

“In five to ten years this has the potential to be a game changer along the Wasatch Front. Density doesn’t necessarily mean affordable housing, but it goes a very long way when Planning Commission and City Council make sure they are planned out effectively and implemented the right way,” Anderegg continued.

Twenty-six residents made comments during the public hearing on the Slopes concept for Thanksgiving Point Station. Only twopeople were in favor of the plan. The rest had concerns about adding residential units before amenities, inadequate acreage for schools and churches and traffic.

“It feels like the developers are running the show here,” said Kelly Eyerly, a Lehi resident of 18 months. “Think of the current residents, not future residents. What is the benefit now? This should not happen.”

“I love what the Ashtons have created here. The PARC tax passed, we should use some of that money to help support Thanksgiving Point without destroying it with this development,” said resident Steve Thomas.

McKay Christensen said they are committed to making the golf course operable again if Lehi City and UDOT extend Clubhouse Drive. “It’s worth noting that there are plenty of golf courses that are bisected by roads, and they keep running,” said Commission Chair Abram Nielsen.

“There’s a misconception that if this plan doesn’t happen nothing will happen. What is your Plan B?” Commissioner Roger Ellis asked Christensen.

“We’d have to come up with another endowment. If we sold the land as is, we’d be selling it as a Resort Community. We’d really like to make this work,” answered Christensen. He explained that Thanksgiving Point is a non-profit – 75% of their funding comes from operations and the other 25% is from donations. “We’d like to be able to use those donations on capital projects,” said Christensen.

“Most of the land is owned by Thanksgiving Point, not Stack or Gardner. The easiest way to make a profit is to make a surface parking lot and put a thousand units on it. We’re trying to come up with creative solutions. We’re not just hitting the ‘easy button,’” said John Makin.

“How can we move the needle on infrastructure before we move on that first development?” asked Commissioner Greg Jackson. “If that were to happen we’d get a lot more buy-in from citizens. I’m not opposed to development, but it has to be implemented correctly. It’s got to be incremental. I’m all for seeing this happen if we can do it the right way.”

“They’re asking for 5,400 over 20 years. There’s a lot of development across the city of Lehi. Everyone complains about not wanting density and we talk about preserving open space and farmland, but at the same time we’re completely against any kind of density or mechanism that allows us to preserve open space,” said Nielsen. “The growth is coming whether we like it or not. We have an opportunity to take that density and focus it in an area that makes sense.”

“Thanksgiving Point has invested so much in Lehi. We owe it to them to set a good vision. If we can work out that vision together let’s do it. I don’t think we let engineering drive the vision or we get Detroit,” added Commissioner Hereth.

The commissioners passed the motion to recommend, with many comments, Slopes Residential’s concept for Thanksgiving Point Station to the City Council with a vote of five to two. Commissioners Brent Everett and Heather Newall voted against the motion.