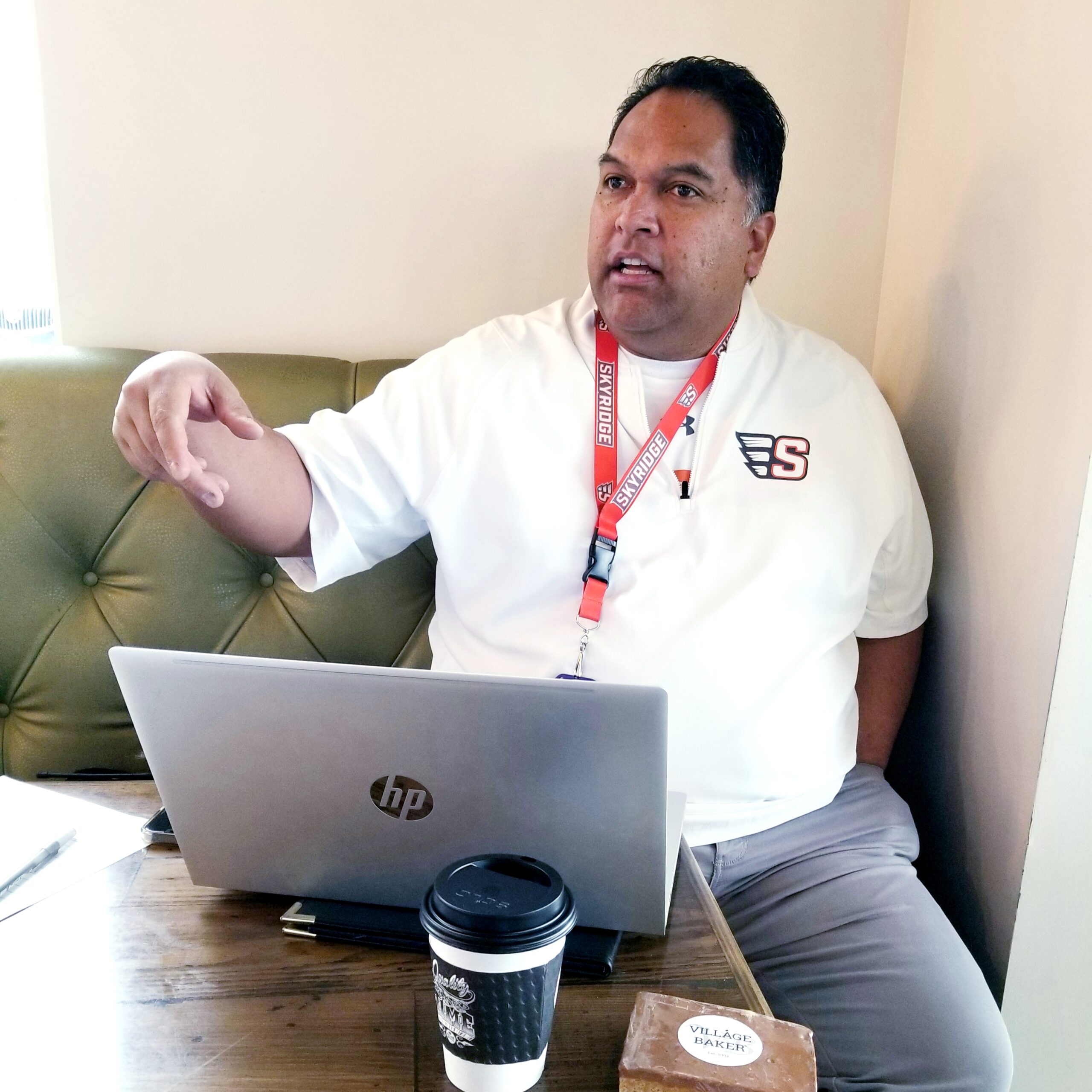 Skyridge High School Principal John Wallwork held his first “Pastries with the Principal” at Village Baker, 3320 Digital Drive on Friday morning, Mar. 4. The informal question and answer session comes with a free drink, a pastry and an hour of the busy principal’s time the first and third Friday of every month from 8 – 9 a.m.

“The Lehi community has been so supportive. Where I came from in Washington, it was hard to get parent support, we rarely had two-parent meetings. It’s night and day from here,” said Wallwork. “Every time we have a PTSA meeting we fill our conference room. Parents come to SCC meetings. At my last school when we’d try to have a meeting with parents it was crickets.”

“The supportive culture with parents and staff and the district has been awesome. The district encourages me to go through PTSA and SCC and make sure parents are in the loop and on board with what we’re doing. It’s a very different message than I’ve ever received as an administrator,” Wallwork continued.

Wallwork started doing his informal meetings with parents in Pasco, Washington. The COVID-19 pandemic has kept him from starting the tradition in Lehi until now. Wallwork sets up his laptop, gets a drink and a pastry and sits across from parents with questions about everything from college applications for seniors to getting sophomores registered for their first year of high school and state testing.

“This year we’re going to do something different. On April 14 in the afternoon or early evening, we’re inviting incoming sophomore students and parents to a little assembly explaining the culture at Skyridge, have a presentation about credits and a pathway to graduation. All the clubs and sports will be in the commons area, almost like a fair. Parents and students will be able to ask questions and get to know the school,” said Wallwork when a parent asked about scheduling for Fall sophomore students.

When Wallwork was asked about the possibility of a third high school in Lehi, he replied, “Skyridge has a little under 2,400 kids this year. Next year the projections show we won’t have many more than that. The year after that we’re projected to jump up a little, but not enough to split.”

“We have two huge trailers right now. Growth in Alpine School District is a challenge. As much as we’re growing here in Lehi, Cedar Valley is getting bigger and they’re getting one of our trailers for next year because we’re not going to need it,” he continued. “Getting a new high school is a long process. As far as I know, there’s no plan right now to add another one in Lehi.”

“I came from a school with 3,100 kids. Last year SHS had over 3,000 with the 9th graders. I’m used to big schools. It helps to have five assistant principals and an athletic director. We meet as a team twice a week to talk about management, it’s a small city over there. I’ve got a lot of help and support to make it easier,” said Wallwork.

He made a commitment to go to as many school events as possible when he got to Skyridge. “I want to be visible and support the kids. I’m attending concerts, plays, games. It’s a busy place,” said Wallwork. “When I go to Costco, or Walmart I smile at everyone.”