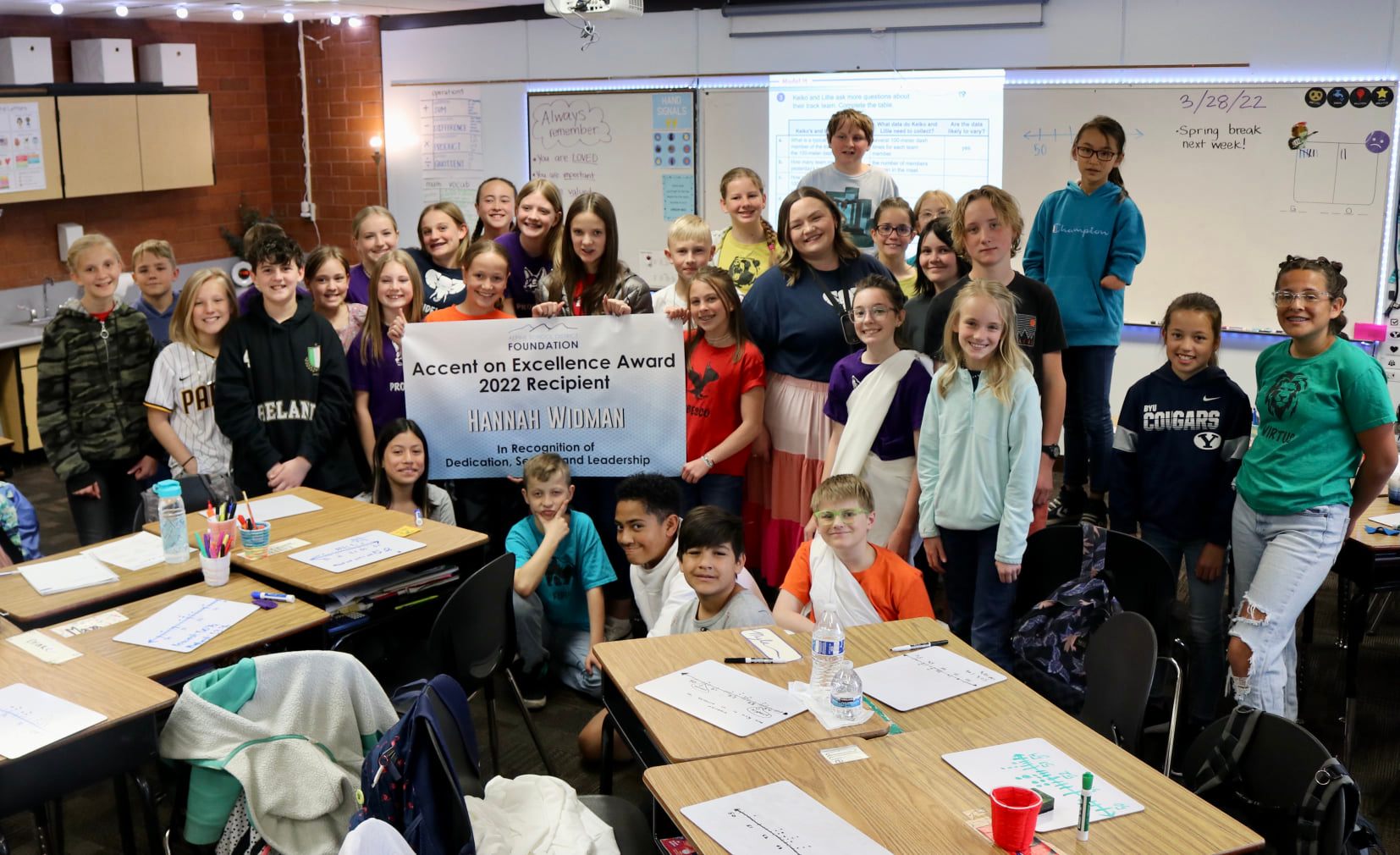 Three Lehi teachers and one head custodian were interrupted at work last week with a gift basket and banner honoring them as one of this year’s Accent on Excellence Awards.

“This year we expanded the number of awards to 20 teachers, three support professionals and one administrator. We have about 4,400 full-time teachers and 4,700 other employees in Alpine School District, so this is a very big honor – we have a lot of great people to choose from,” said Tyler Vigue, Alpine School District Foundation Director. Vigue accompanied Superintendent Shane Farnsworth, School Board Member Stacy Bateman and other members of the ASD Foundation board to make the presentations to the winners.

The Accent on Excellence Awards honor outstanding educators and employees who are exemplary role models and heroes for their students. The ASD Foundation and several local businesseslike DoTerra, Hale Center Theatre, Hometown Suites and others,partner with the foundation to recognize, provide gifts and celebrate the winners.

Robyn Robinson, a fourth-grade teacher at Dry Creek Elementary, had just told her class about testing after Spring Break when her husband Joe and the award crew entered her classroom. “I lied to her when I was leaving today because I was dressing a little better than usual. I told her I was meeting my boss,” laughed Joe Robinson.

“Mrs. Robinson is a kind, nurturing teacher who expects the very best of her students. She goes the extra mile making sure that students understand and are supported in their learning,” said Principal Patrice Worlton. “She is concerned about the social and emotional well-being of all students and is always thinking of innovative teaching strategies that will support the dynamics of her class. She is a tribute to the teaching profession at a time when it is vital for great teachers to be celebrated.”

Robinson’s students applauded her and quickly assembled for a group photo with their teacher. “She’s funny and nice,” said one student. “She has good control in the classroom, she doesn’t let things get too loud,” added another student.

“She is a rock star,” said Meadow Elementary Principal, Alisa Hart, during an awards program to honor sixth-grade teacher Hannah Widman. In addition to the Accent on Excellence Award from ASD, Widman also was named “Teacher of the Year” for Meadow Elementary.

According to Hart, “Hannah had been a second-grade teacher for three years when we asked her to teach sixth grade. She not only had to train during the summer to teach the sixth-grade class but also had to help train her replacement. She has absolutely knocked it out of the park this year.”

When Hart asked Widman about her experience this year teaching sixth graders Widman said, “I have found my jam.”

Students in her class reflect the care and excitement Widman generates in her classroom. Violet said, “We always do fun stuff. She worries about you and buys you stuff when you need it.” Lilly, another classmate, said, “She never yells at us, and we have fun lessons.” Austin said, “I love Mrs. Widman. She is super helpful if I am struggling with a lesson or project. She cares about everyone in the classroom. She is an amazing teacher.”

CTE Teacher at Viewpoint Middle School Jake Sigafus has been teaching woodshop and coaching for 22 years. “Mr. Sigafus does it all at Viewpoint. He has been crucial on our leadership team and shaping our culture as a new school through helping develop strong mission, vision and goals,” said Principal Aaron Barth. “Jake coaches cross country and track. He can often be found on his prep helping other teachers – from hanging lights in the auditorium to talking through classroom management strategies. Jake has a very approachable demeanor, and his peers will often look to him for direction. He is an integral part of the foundation of Viewpoint.”

Sigafus’ students were quick to praise him for the interesting assignments he gives and the cheerfulness he exudes.

“Jake is the best! One day a student accidentally broke the leg of one of our chess tables in the library. I asked his advice on how to fix it, thinking something amateur like wood glue. He came back later that same day with a brand-new table leg that he had made himself! He is so helpful and kind and incredibly skilled in all his craftmanship, but especially skilled at teaching,” wrote Alisa Ellingson on the ASD Facebook post.

“I have never been barked at before when I’ve come to a school! You guys are awesome,” said Alpine School District Superintendent Shane Farnsworth. “How about three Belmont Bulldogs barks for Mr. Harper?” The students were happy to reply.

Mr. Harper was one of only three support professionals in all of ASD to win an Accent on Excellence Award this year. “I saw in the write-up about Mr. Harper that someone who does their job well always does more than just their job. Mr. Harper does so many things that aren’t his job, but just because he loves you guys so much.”

Principal Misty Rocha said, “Mr. Harper is a team player who goes way above his job description to help students at Belmont. Not only does he keep our school in beautiful condition by paying attention to details, but he also notices those who need connection. He is often seen helping in the lunchroom, walking a student back to class, or cooking yummy food for the staff. Alan is a leader, and everyone loves him.

The Accent on Excellence awards are presented in the Spring of each school year. Each of the recipients receives a gift basket, a cash award and the accolades of the ASD administration. The awards are sponsored by the Alpine School District Foundationwhich is a 501c3 and a philanthropic entity within the district.