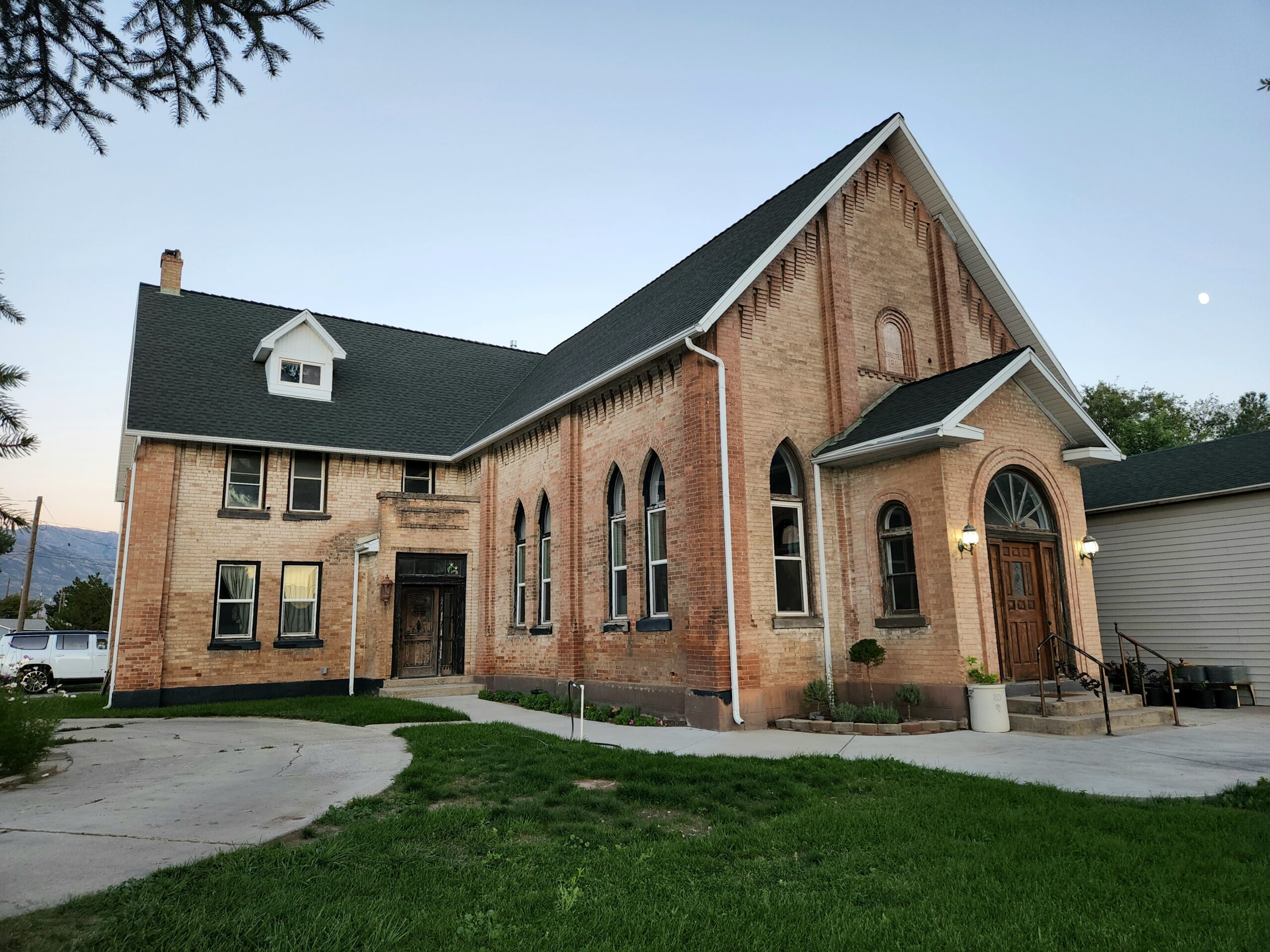 In 1890, members of The Church of Jesus Christ of Latter-day Saints who settled in Lehi had their choice between two church buildings to attend Sunday services. Residents near the railroad tracks considered the north end of town at the time, had difficulty getting to those first two churches, so Bishop David Evans organized The North Branch. The humble, one-room building, eventually known as the Third Ward Church, is the only one of the five Lehi churches left standing.

Members of the North Branch donated a bushel of wheat every year for four years to pay for the construction of their church building. They used stick framing and molded steep arches on the front door and six windows on either side of the one room.

During World War I, members of the Third Ward sold some oftheir wheat harvest to the federal government. They invested the money and received a return for many years, allowing them to add a stage and a wing of classrooms to the building that served many functions for the community.

The Third Ward Church has been repurposed a few times over the years, allowing it to survive. Ross and Jean Lamb bought it in the late 1960s and made it their home for the next 50-plus years. The Lambs took on the clean-up and repair of the church. The church was vacant and open to vandals and critters for more than a decade before they bought it. Ross Lamb used to say he did more “church work” than anyone in the ward.

In 1998, the Lambs had the Third Ward Church added to the National Register of Historic Places. Preserving the church was a priority for the Lambs. It’s the oldest LDS church still standing in Utah County.

“I had no plan. The church wasn’t for sale, but we called Scott Lamb anyway,” remembered Jami Ray. Often, the Lambs had people and businesses offer to buy the church, but they always turned them down. Until Jami and Zeb Ray asked in 2021.

“We were surprised when he got right back to us. He felt like we were the ones,” Jami continued.

In September 2021, the Rays changed the zoning on the property from R-2 (medium-density residential) to Mixed Use. It was the of the first steps of many to transform the church into a vintage and antique store, Jami Ray Vintage.

“Old buildings aren’t being saved anymore, and the same goes for brick-and-mortar stores,” said Jami Ray. “I feel like keeping a shop is an art form, and it fits my aesthetic.”

It took a solid week for the Rays to remove everything the Lambs had put into the main room of the church to make an apartment. Zeb spent a month in the rafters removing insulation and cleaning up the stick frame. They spent weeks cleaning and repairing the wood floors on their hands and knees. The original arches above the door and around the stage slowly came back to life. Jami posted progress reports for their 185,000 followers on YouTube. “We have so many people invested in this project. Some are coming from out-of-state to the grand opening, and they want to come to the football game on Friday night and visit the Lehi Bakery,” said Jami.

Right after they’d finished the demolition phase of the project, Jami and Zeb went on a buying trip to England. “We saw how people honored old buildings and reused everything. It was inspiring – we don’t want to cover any of the charms of the church,” said Jami. “We live in uncertain times just like the people who built the church. We’re saving every piece of wood and reusing it on other repairs and projects inside.”

The Rays have also planted a garden in the churchyard and moved their chickens and lambs to the property. “I think people who attended church here would be proud of how we’re using the land,” Jami added.

During the last few weeks of summer, the Rays moved from their store on Main Street to the church. “I underestimated how much I had at the store. We sell used stuff, so we’re like borderline hoarders,” laughed Jami. The official grand opening of Jami Ray Vintage at the church is September 14 – 16. They will have make-and-take projects, a VIP event on Saturday evening, and classes. The store has been open for a few weeks, Tuesday – Friday, 10 a.m. to 6 p.m. and Saturdays, 10 a.m. to 4 p.m., for anyone who wants to avoid the grand opening crowds. They’ve already had customers who attended Sunday School there as children.

“It’s going to take years to finish everything completely. Zeb and I aren’t really masters at any of this, but we’re willing to try and willing to fail. The fun is in each individual project,” said Jami.