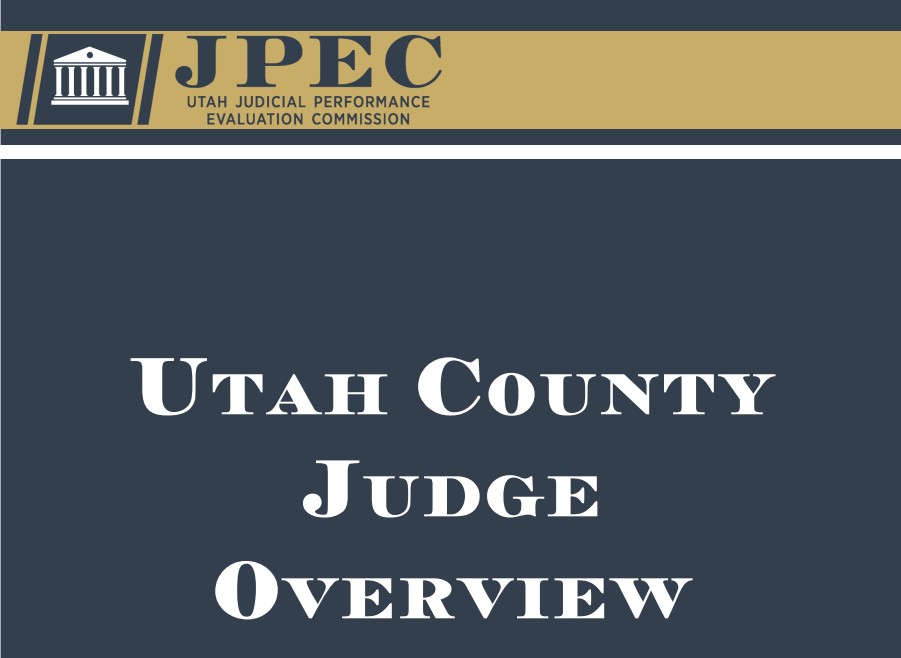 With the November election coming in about 30 days, voters will decide whether to retain current Utah County judges whose terms are ending. Statistics show that up to 23 percent of Utah voters do not finish their ballots. Of those who do complete the ballot, many do not have adequate information to make an informed vote on Utah’s judges.

When Utahns are called to local justice courts, it’s likely over traffic tickets, infractions, and misdemeanors, which could potentially land them in jail for a whopping 300+ days or $5,000 in fines.

This leads to this question: who’s making sure the judges are judging fairly, respecting citizens and abiding by their oath?

Since many voters do not have regular interactions with local judges, and judges are not allowed to campaign, advertise or lobby for votes, in 2008, the Utah legislature created the Judicial Performance Evaluation Commission (JPEC) to help voters evaluate judges.

The goals of JPEC are:• To collect and disseminate valid information about each judge’s performance so that voters may make informed decisions about whether or not to retain that judge in office;• To provide judges with helpful feedback about their performance so that they may become better judges and thereby improve the quality of the judiciary as a whole; and• To promote public accountability of the judiciary while ensuring that the judiciary continues to operate as an independent branch of government.

The Judicial Performance Evaluation Commission conducts multi-faceted evaluations of judges to accomplish these goals. Those evaluations are collected through in-person and video observation. The pandemic accelerated the use of video observation as more courtrooms were outfitted with cameras and recording equipment.

The Commission publishes the evaluation report and determines whether the judge meets or exceeds performance standards. The voters ultimately decide whether each judge will continue to servein office.

Lehi voters will have the option of retaining Brook Jason Sessions in the office of Justice Court Judge of Lindon Municipal Justice Court. Depending on the voter’s address, other Utah County judges will appear on the ballot for retention. Here is a list of the judges in Utah County who are seeking retention.

Jennifer Yim, the executive director of the Utah Judicial Performance Evaluation Commission, said, “JPEC conducted its first evaluations of judges for the 2012 general election. JPEC could not evaluate all justice court judges at the time because the caseloads were too small to allow for surveying and reliable in-person court observation. But beginning this summer, through a rolling process, JPEC has begun to evaluate justice courts with the smallest caseloads in the state through video observation.”

Video observation of very low caseload courts allows the judge to get feedback on their performance, which can be very helpful to judges who often receive very little reliable feedback.

“The video observation project has been in the planning stages for about five years. Getting over the technology hurdle was helped significantly by the pandemic. JPEC offered grants of up to $7500 to municipalities and counties subject to video observation to help with needed technology upgrades,” added Yim.

The JPEC website, www.judges.utah.gov, provides individual assessments on all 63 Utah judges, who can only retain their seat on the bench by voter approval.

Voters are encouraged to visit the website before completing their ballot to get informed about local judges’ evaluations and performance.