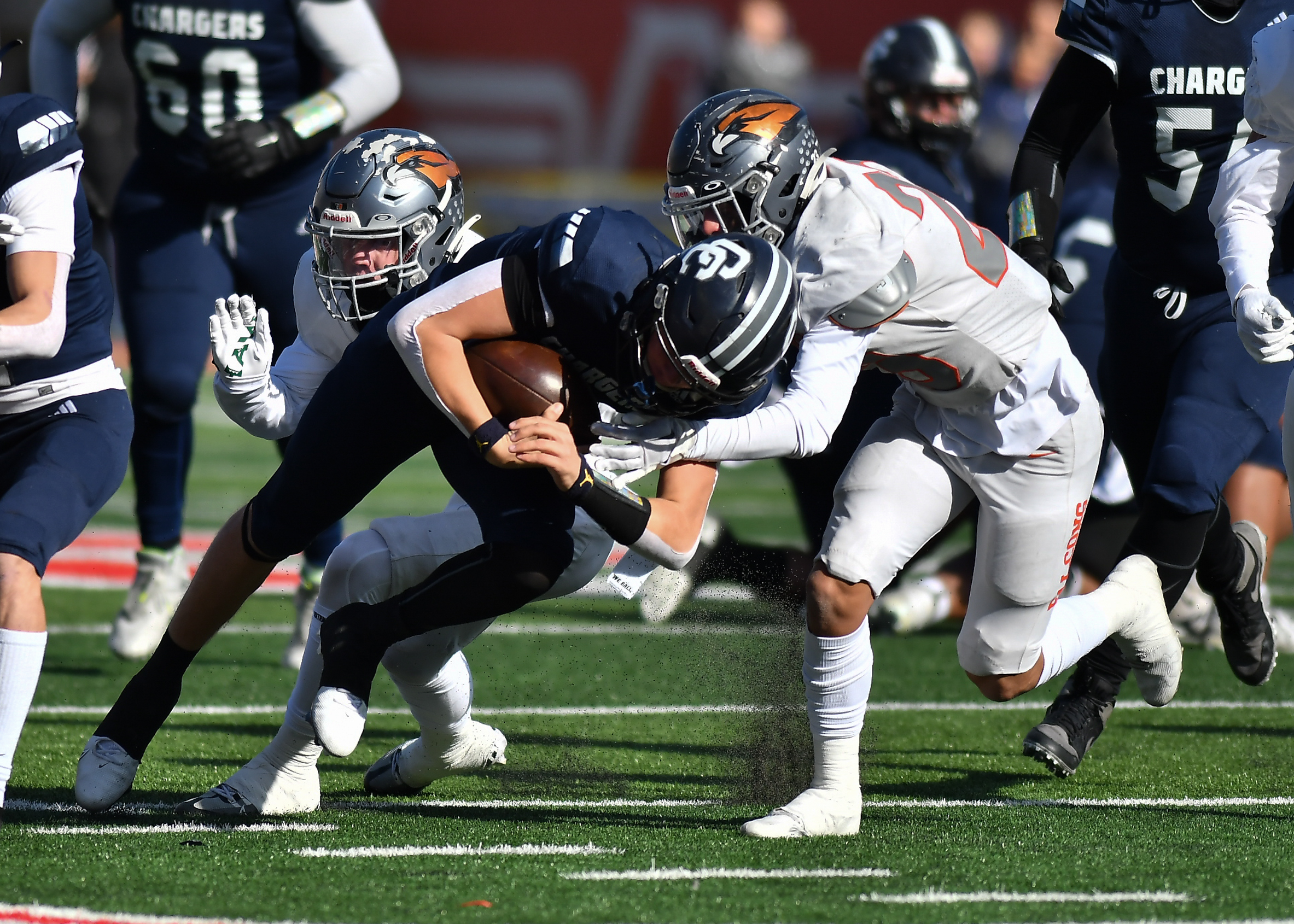 In a defensive battle between the best of the best in 6A high school football, the Skyridge football team claimed their first state championship in school history with a 17-7 win over rival Corner Canyon at the University of Utah’s Rice-Eccles Stadium on Nov. 18.

To do it, the Falcons held the Chargers to their lowest point total in an in-state game since 2015. The win also avenged Skyridge’s only loss of the year as the Falcons fell short by four points to Corner Canyon during the Region 4 season.

Skyridge head coach Jon Lehman said, “When you’re playing Corner Canyon, you don’t think 40 points is going to be enough,” but 17 points was enough to beat the Chargers in the state championship game.

Senior outside linebacker Tausili Akana played with purpose as he disrupted the Charger’s offensive line throughout the gameand registered 3.5 tackles for loss among his six combined including 1.5 sacks.

A defensive team effort eliminated any big plays by Corner Canyon. The game was about fourth-down stops — two in the first half and three in the second half. Every player gave their best effort in shutting down the Chargers.

“The whole front controlled the game,” Lehman said. “Our safeties did a great job communicating. (Smith) Snowden and Akana always make plays, but Sione Westover sprained his MCL on the first drive of the game and just gutted out the game and I’m proud of him,” he went on.

Anderson said, “At halftime we changed our reads and were able to shut them down the second half. We played together as one unit and it showed with our success in this game.”

The Falcons have spent the season serving the community, building character and enhancing their mental toughness. They have played with discipline too; in the last seven games the Falcons have averaged just 6.5 penalties per game. Their control has been important to their success.

Lehman said, “These guys are so smart and they work so hard and they care so much. They have controlled their emotions on the field and it is a pleasure to be a part of the process.”

Young said, “There was a lot of adversity in this game we overcame. They were running on the ball and we had to battle hard to stop them. I hurt my shoulder early in the game but continued to play.

“Overall, this was a great game and we were tough and battled,” the player added. “Everyone did their job today and we came out with a win. I feel great and I’m on top of the world right now.”

The Falcon offense was steadied by senior quarterback McCae Hillstead in his final game as a Falcon. Hillstead managed the game and possessed the ball, keeping the Chargers offense off the field. Senior wide receiver Jace Doman secured the win with an 11-yard touchdown early in the fourth quarter.

Skyridge offensive coordinator Justin Hemm said, “This was a complete team effort. We did things well, whether it was a running game or picking up a key first down near the end. The O-line protected the pass game and we were able to throw the ball.

“All around, we executed well offensively, defensively, and on special teams,” Hemm said. “This feels great. The boys had a goal in mind early on and they’ve approached each day one at a time doing what they have needed to and taking care of business. They deserve this.

“The boys have been locked in all week and this is a moment they have been preparing for since the off season with lifts and summer workouts. To get to this point and accomplish their goal against a well-coached team is so fulfilling and I could not be more proud of them,” added Hemm.

Doman said, “I’m feeling so good. I have been dreaming about this since the day I was born. We came out and knew it was going to be a dogfight from the get-go and it was a fight the whole game, but we kept going. We didn’t let down and ended up on top.”

Dreams really do come true as the Skyridge Falcon football program has been working and preparing for a state championship throughout the six years of the program’s existence.

Anderson said, “I feel so good, it is nice to be a part of the team that won the first championship for Skyridge football. This is a big moment that I have been dreaming about since second grade.”

Lehman, is going out on top as this was his last game as head coach. He’s stepping down to take on the role of athletic director full-time.

Lehman said, “This has been an unbelievable ride. I am just so proud of these guys for digging in and working every day and that goes for players, coaches, the community, everybody that has stayed with the process. It feels so good to be here right now.”

The Falcons’ willingness to fight, their discipline and their belief in each other this season has earned them a moment in history with a state championship.