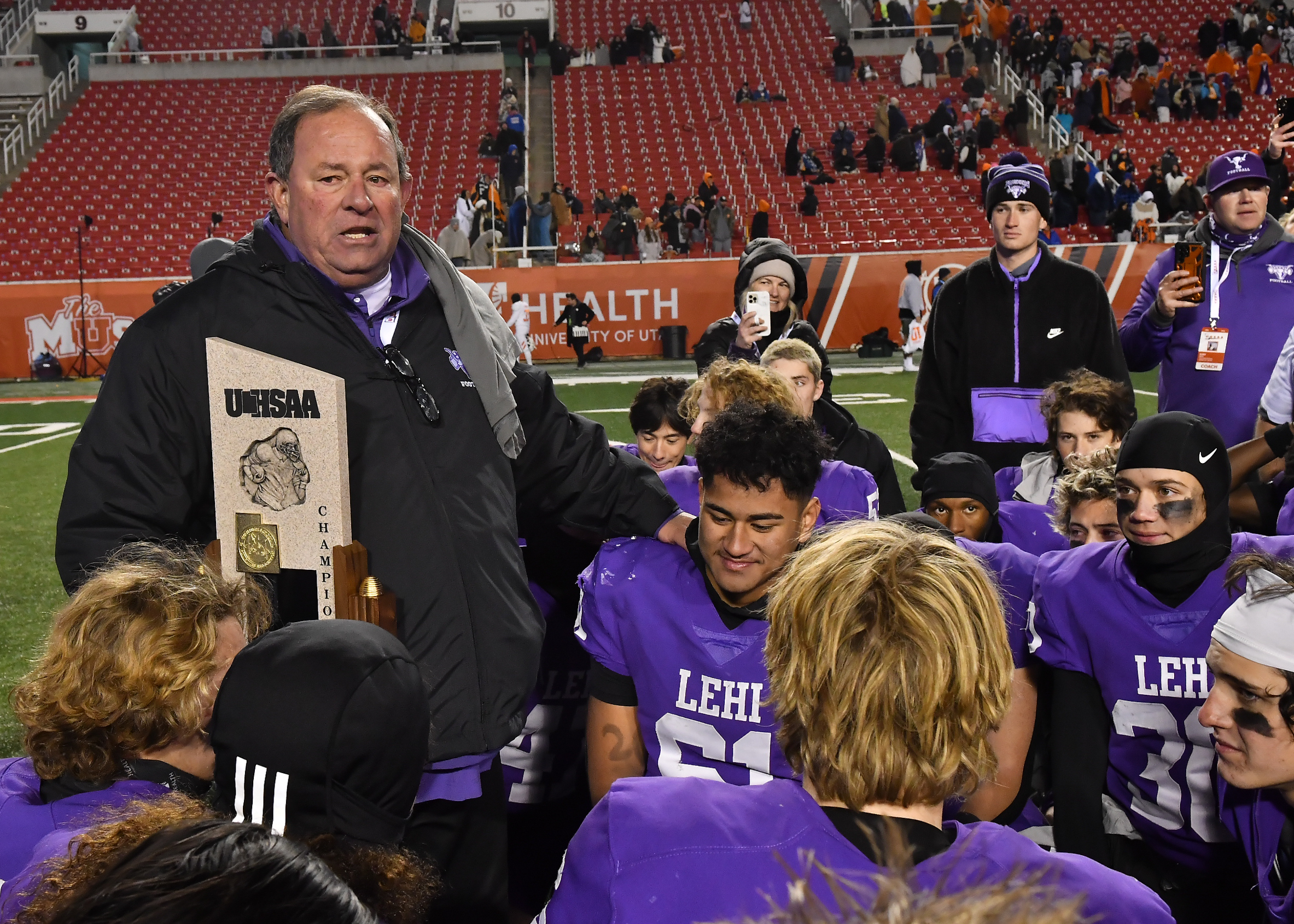 The Lehi High School football team needed every ounce of will and preparation to outlast top rival Timpview in the 5A championship contest.

However, the kind of defensive and offensive plays that have marked the Pioneer effort during their unblemished season helped them to claim the gold trophy for the second consecutive year with a 29-23 triple-overtime victory over the Thunderbirds at the University of Utah’s Rice-Eccles Stadium on Nov. 18.

“I thought it was one of those gutsy, gritty games which you get in this sport,” said Lehi Coach Ed Larson. “We had mistakes and big plays on offense; we countered some of their success with great defense; and with special teams holding their own, all we could do was grind it out and see what happened.”

The hard work started with the opening whistle. The Pioneers won the toss and elected to kick off, so Timpview got the ball first.

The Thunderbirds marched right down the field with relative ease and put the first points on the board at the 8:33 mark with a 10-yard rushing score. The PAT was missed so the tally stood at 6-0.

Then it was Lehi’s turn to efficiently move the ball. The Pioneers matched the score in less than four minutes at 4:36.

The key play of the drive was a 40-yard completion from senior quarterback Jackson Brousseau to senior running back Carson Gonzalez, and Gonzalez finished the drive with a 1-yard plunge across the line. This point-after attempt missed as well, so the teams remained tied.

Each team’s next possession took time off the clock but didn’t accomplish anything else. An 8-minute push by Timpview ended with an endzone interception by senior defensive back Kadiyon Sweat. The Thunderbirds then returned the favor by picking off Brousseau at their own 2-yard line.

The subsequent possession ended in a turnover on downs at the Lehi 20-yard line. Next up: trading the ball with a pair of fumbles.

For Lehi in the second instance, senior defensive back Lance Olsen forced the fumble and the ball was recovered by senior linebacker Chanse Miller at the Pioneer 27 with 2:49 left in the half.

Senior tight end Koby Moore had a couple of key catches during this drive, which ended with a 17-yard touchdown toss to Gonzalez with 22 seconds remaining. This time senior kicker Nate Shepherd split the uprights perfectly and the Pioneers took a 13-6 lead to the locker room.

Lehi got the ball to start the second half and reached the Timpview 10 but couldn’t cross the line. Shepherd nailed a 27-yard field goal at the 8:20 mark to push his team ahead 16-6.

In yet another mirror image, the Thunderbirds capped their next possession with a 28-yard field goal to narrow the gap to a single touchdown again.

The Pioneers were held to 3-and-out on their following seriesand sophomore kicker Gavin Fenn made the game’s first punt with 3:38 to go in the third quarter.

This time Timpview was able to capitalize with the help of a pass-interference penalty in the middle of the drive. The Thunderbirds tied the score at 16-all with 10:09 left on the clock.

There were four more ball exchanges before the end of regulation play, but both defenses rose to the occasion and didn’t allow the opponent to score again, bringing on the extra period.

Lehi won the toss once more so Timpview got the ball first. The Thunderbirds completed one big pass play that helped set up a short rushing touchdown to give them back the lead at 23-16.

Moore snagged a catch for 17 yards on first down of the Pioneer possession. A Gonzalez run took the ball to the 2-yard line, and Brousseau ran it in from there when his receivers were covered to draw the Pioneers even once more after the PAT at 23-23.

With the order of play now reversed in the second overtime, neither team was able to score. Brousseau’s fourth-down pass fell incomplete to end Lehi’s try.

Timpview started the turn with two penalties and got backed up even farther with a sack by senior defensive end Will McCleary and senior defensive tackle Trevor Bulpitt to finish off thatseries.

In the third overtime, the Thunderbirds got as close as the 13-yard line but again hurt themselves with a big penalty. A long pass attempt was read perfectly by senior defensive back Nathan Anderegg and he made an interception to reclaim the ball for the Pioneers.

They went for the home run on first down as Brousseau found senior wide receiver Kolton Tanner open after he made a hard cut to shake his defender and he waltzed into the endzone and the history books to touch off an exuberant celebration by the huge crowd of Lehi fans.

The team’s leaders all season stepped up to create this outcome. Gonzalez capped his brilliant career with 18 carries for 115 yards and three catches for 68 yards for 183 total yards and the two touchdowns.

Brousseau finished 29-of-40 (73%) for 293 yards and two touchdowns. Moore ended up with seven catches for 84 yards and Tanner had four for 53 yards including the game-winning score.

Senior linebacker Blake Jenkins led the defensive effort with 15 combined tackles including six solo. Sweat finished with seven solo among his 12 tackles along with the pick.