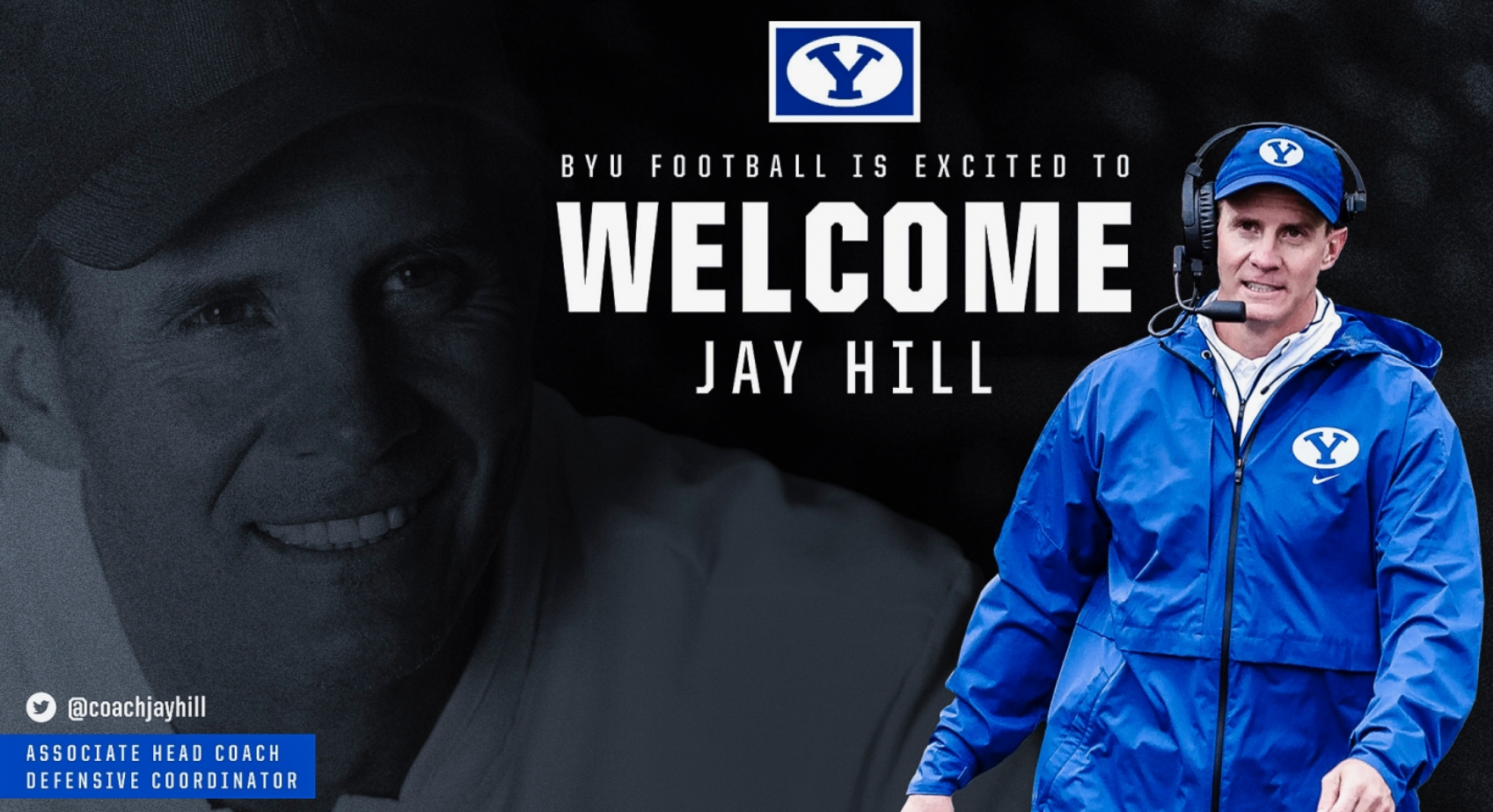 “I am pleased to announce Jay Hill as our associate head coach and new defensive coordinator,” Sitake said. “Jay is a leader. I have worked with Jay for nine years while we were at Utah together, so I know first-hand how like-minded we are defensively, how great of a recruiter he is and how committed he is to developing players. He has done an amazing job everywhere he has been, including building and leading the Weber State program most recently, and I’m excited to now have him here at BYU.”

Hill comes to BYU with 22 years of coaching experience, including the past nine seasons as the head coach of the Weber State Wildcats of the Football Championship Subdivision. Born in Lehi, Utah, Hill transformed the Wildcat program while becoming Weber State’s all-time leader in coaching wins with a record of 68-39. He led Weber State to eight-straight winning seasons, six trips to the FCS Playoffs and four Big Sky Conference titles.

“I’m very excited to be joining Kalani and the rest of the BYU staff,” Hill said. “They have an outstanding program that wins on and off the field. BYU’s brand is nationally recognized and respected, and I can’t wait to get to coaching, recruiting and winning in the Big 12.”

After taking over a program coming off back-to-back two-win seasons, Hill went on to lead the Wildcats to the FCS Playoffs six of the last seven seasons while achieving six playoff victories, including a run to the 2019 semifinals. The Wildcats won 10 or more games in four of the last five full seasons and have been ranked as high as No. 2 in the nation, the highest ranking in school history.

During the 2022 season, Weber State posted a 10-3 record and advanced to the second round of the FCS playoffs. The season was highlighted by Weber State’s first FBS win in 29 years as the Wildcats beat bowl-bound Utah State 35-7 in Logan. WSU started the season at 6-0, tied for the best start in school history. The Wildcats were nationally ranked all season and had 15 players earn All-Big Sky honors.

Hill coached 16 players to 26 different All-America honors at Weber State. The Wildcats program excelled under his leadership with players earning 91 Big Sky All-Conference awards and multiple Academic All-Big Sky honors. Hill is a two-time AFCA Region Coach of the Year and won Big Sky Coach of the Year during the abbreviated spring 2021 season due to Covid-19.

He spent 13 years (2001-13) at Utah, including his last nine seasons as a full-time assistant coach under former BYU linebacker Kyle Whittingham. Prior to that, he spent four years as a graduate assistant and administrative assistant with the Utes under head coaches Ron McBride and Urban Meyer. Hill became a full-time assistant coach under Whittingham in 2005, spending nine seasons as the special teams coordinator. He also coached on offense and defense, coaching the cornerbacks (2005-06; 2010-11), running backs (2012) and tight ends (2007-09; 2013).

In his career at Utah, Hill served as the position coach for five All-Americans: defensive back Eric Weddle in 2006, punter Louie Sakoda in 2007, Sakoda as a place kicker in 2008, punt returner Shaky Smithson in 2010 and kick returner Reggie Dunn in 2012. Weddle was drafted in the second round of the 2007 NFL Draft by the San Diego Chargers and became a Pro Bowl safety. Sakoda, the only unanimous consensus All-American in Utah football history, was a Lou Groza and Ray Guy finalist in 2008. Smithson led the nation in both punt returns yards and average in 2010. Hill also mentored NFL draft picks Sean Smith, Brice McCain, R.J. Stanford and Brandon Burton.

Hill played college football at Ricks Junior College, where he earned junior college All-America honors at cornerback. He went on to play two seasons (1998-99) at Utah under McBride. As a senior, he led the Mountain West in interceptions, was named Utah’s Defensive MVP and earned second-team All-Conference honors. He later played briefly in the XFL and signed free agent contracts with the Buffalo Bills and New York Giants.

Hill earned a bachelor’s degree in Spanish in 2000 from Utah and completed his master’s degree in ESS/Sports Psychology in 2005.

He and his wife Sara have four children: Ashtyn, Alayna, Allie and Jacob.