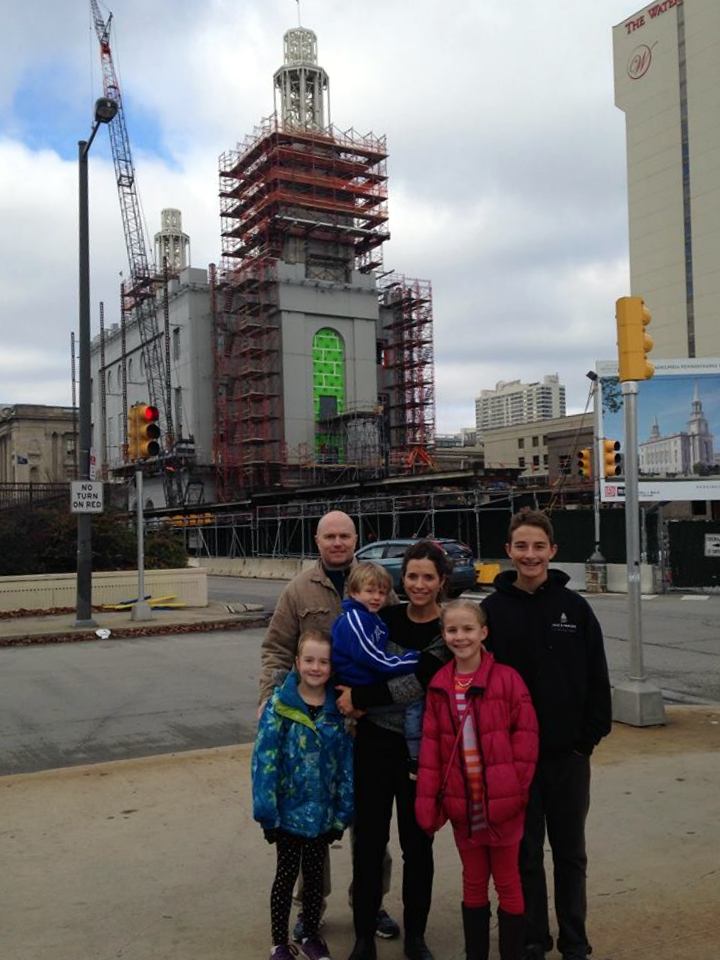 The LDS Church broke ground for a temple in downtown Philadelphia, Pennsylvania in 2011. In the months leading up to January 2014, the Brian and Harmony Hatch family of Lehi faced a life-changing decision. Brian was asked to be the project manager for the interior of the new temple in Philadelphia, an amazing assignment that would mean moving their family to Philadelphia for more than two years. They declined three times before they accepted the answer to their prayers and said, “Yes.” The temple is complete and open to public tours before it is dedicated on September 18, one day after the 229th anniversary of the signing of the Constitution at the Philadelphia Convention.

Lehi, Utah, is a small town compared to where the Hatches moved, ten minutes from downtown Philadelphia, PA. Brian Hatch remembers experiencing culture shock when he and Harmony went to look for a home west of Philadelphia. “Seeing the row homes, the diversity, and unfortunately, a lower income way of living was shocking to me. I felt very uncomfortable on that drive.” It didn’t take long before Brian was driving that same route every day to work and even making friends with people living in those neighborhoods.

The Hatches attended a diverse inner-city LDS ward that included refugees from Liberia and immigrants from Haiti, Honduras, and many other countries. Harmony observes, “Attending an inner-city ward and having my husband serve in the bishopric allowed me to help others in a remarkable and life-changing way. I found that service opportunities seldom came when it was convenient, but rather required me to set aside personal demands.”

One of the Hatch’s daughters, Ellie, was the only Caucasian girl in the Young Women’s program of their ward. None of the other girls could believe her shiny blonde hair was real. Oldest son, Colton, became best friends with a big Haitian teenager who initially thought Colton looked like Justin Beiber, and that he would be a snob. Before they moved back to Lehi this summer, Colton and his friend were going to all the stake dances and wooing ladies together.

The Hatch children (Colton, Ellie, Grace, and Will) went to bar mitzvahs and quinceanera to support their new friends. The whole family embraced the experience of living in Philadelphia, even though they knew it was for a short time. “I love the fact that it brought me and my own family much, much closer together. Harmony and my kids thrived out there and supported me so much,” said Brian Hatch.

While the Hatch family was being shaped and changed by living in Philadelphia, the LDS temple was slowly rising from a hole in the ground to become a spectacular part of the Philadelphia skyline. The interior millwork, door casings, stair railings and window trim was patterned after Independence Hall, just a few blocks away from the new temple. Independence Hall was built in 1732 and originally housed Pennsylvania’s colonial government. Both the Declaration of Independence and the U.S. Constitution were signed in the Assembly Room of Independence Hall. There were many times Hatch didn’t think the temple would be completed on schedule with all the challenges they had to overcome, but it came together beautifully in the end.

“Instead of counting down the days until we could move home, I began to wish for a little more time to serve, love, and become something better,” said Harmony Hatch. The Hatch family moved back to Lehi a few months ago and have already started making their old neighborhood and ward family better.