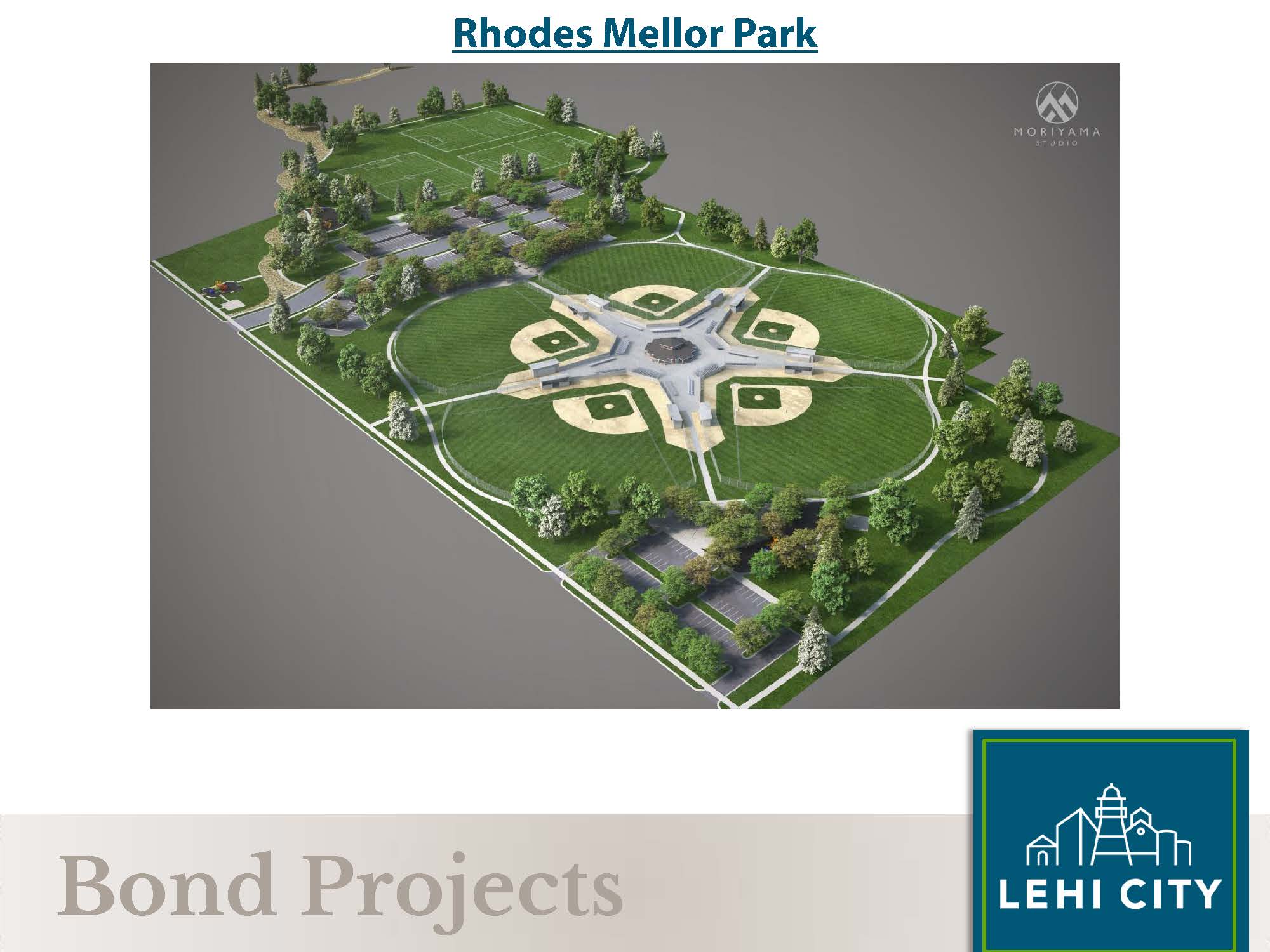 The centerpiece of the bond is the construction of a five field baseball/softball complex with several additional multi-use fields on the south side of Lehi to be named “Rhodes Mellor Park.” This park is intended to be a 55 acre regional park, attracting major tournaments. The price tag associated with this project is $21 million. The next two items with the largest price tags are $8 million for Peck Park (72 acres) and $11 million for land purchases for future parks. Details regarding amenities and features of Peck Park were not provided, except that it will be built in “phases.”

Ranc said that the narrow rejection of the Recreation, Arts and Parks (RAP) tax last year was due to the fact that specific projects and details had not been outlined in the tax proposal. According to Ranc, “We have done our homework.” He also argued that this is a good year to ask the public to pass a bond with the general election garnering voter interest, and the hope that a large percentage of citizens will go to the polls.

Over the last several years, Lehi City has conducted extensive citizen surveys indicating resident interest in improved/more large city parks. Research was also recently conducted regarding the willingness of Lehi voters to approve a bond of this size. When questioned about how the size of the bond was determined, Cameron Boyle, assistant to the city administrator, provided the following statement from Lehi City:

“In July the city completed a resident survey to determine resident opinion on the state of parks and recreation in Lehi. As part of that survey, likely Lehi voters were presented with the bond language as it will appear on the ballot and asked to identify their level of support for the bond. Respondents were asked if they would support up to a $50 million bond with an average yearly impact of $159.06 for a primary residence.

In terms of support for the bond, there was no statistical difference between the three proposed bond amounts ($30, $40, or $50 million). The survey determined that the majority of likely voters would support a bond for $50 million in order to complete necessary parks projects.

The city used this information as a limit to prioritize the most pressing parks needs and develop a fiscally responsible project list. We feel that a $50 million bond is what it will take to fully address current park needs and appropriately plan ahead for future parks by purchasing additional land now (since land will continue to get more expensive as years pass).”

“Polls have been taken, public input meetings have been held, and studies have been conducted; Lehi is way behind in recreational facilities and parks for its citizens,” said Ranc. “Lehi has ½ the square feet of recreational land per person compared to Provo City!” said Dan Harrison, city recreational director. Harrison also said, “Lehi is the only municipality I’m aware of that has a cap on participants in recreational programs. There are waiting lists of children and youth who want to participate but cannot.” Harrison went on to mention some programs have been cut completely due to lack of facilities. “I have been recreation director for 15 years and not one baseball field has been added in that time, and we have tripled in population,” he said.  A comment from a citizen in a survey said, “We do not want Lehi to become business parks and strip malls.”

In considering the bond, Council member Chris Condie expressed concern that many residents feel, with all the growth in the city, there should be enough taxes already collected to provide more parks and recreational facilities for its citizens. City Manager Jason Walker said, “Why should current residents shoulder the entire financial burden to provide for all these facilities, when those who move into Lehi City in the future will benefit having not contributed at all? We want generational equity.”

The bond duration is 20 years. “With interest rates at an all-time low, this is a good time to bond.” said Ranc. The cost to the taxpayer is projected to be about $15 per month on a home valued at $280,000.

In a subsequent interview with Boyle, he said, “Lehi has been judicious in asking for funds from its citizens for recreation. This is the only general obligation bond Lehi has proposed, ever!”

Besides the large Rhodes Mellor park, Peck Park and the funds allocated for land purchase, other “Medium Park Projects” are planned to fund major improvements to five existing parks: Jordan Willows, Veteran’s, Willow Creek, Pointe Meadow and Station 83. Twenty one other smaller parks will be improved and a new dog park will be added.

An open house will be held at 7 p.m. on Wednesday, September 7 at Lehi City Hall. Two public input meetings will be held on September 13 and October 25 at City Hall, and an additional open house on October 26. Lehi City is committed to a rigorous public relations effort for the bond passage in November. More information about the bond can be found at http://www.letsplaylehi.com.