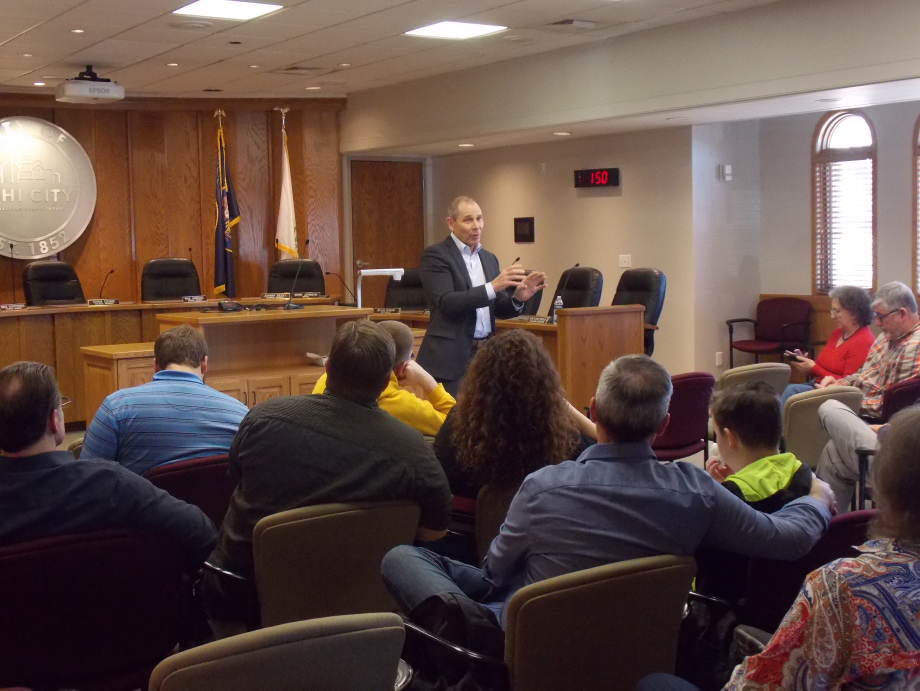 Utah congressman John Curtis stopped by the Lehi City Center this past Saturday for a town hall meeting. Representative Curtis is currently serving the 3rd congressional district of Utah, a seat he won after Jason Chaffetz vacated his position early. Curtis has been in office for only 12 weeks and is holding town hall meetings in cities throughout the district as part of his ongoing campaign. He will run for office again in the mid-term elections this fall.

The Lehi town hall meeting was held in the Lehi City council chambers. A relatively small turnout of just over 20 people made for a quiet event. Mayor Mark Johnson was in attendance, as well as Representatives Kay Christofferson and Cory Maloy.

Curtis started the meeting by addressing the recent school shooting in Parkland, Florida. He stated that he is a “gun guy,” having previously been the COO of Action Target, a company that builds shooting ranges across the world. He listed four areas in which he believes improvements should be made to help avoid further tragedies. The first area should be addressing stalled legislation regarding bump stocks. “Anything we have agreed makes a legal weapon illegal, should be illegal. And to be honest, in congress we’ve stalled on it. It is time to bring that up again and support that,” said Curtis. He added that improved background checks are necessary, as is “making school grounds safe…moving administrative offices to the front of the building, with fewer points of entry.” He also stated that having teachers or other school workers trained to carry a gun in schools is something “we should be talking about.” Curtis recently co-sponsored a bill proposed by Senator Orrin Hatch that would fund and authorize the training and teaching of law enforcement and school administrators to catch and address warning signs of possible violent offenders.

Another topic discussed during the town hall was the influence lobbyists and special interest groups have on elected officials. Curtis acknowledged the effect of interest groups and stated that his brief time thus far in Washington D.C. has been “surreal, just surreal.” He urged his constituents to participate in the political process and make their voices heard. He stated that his recent nay vote regarding the federal budget was due in large part to opinions expressed by his constituents.

A wide range of topics were briefly discussed, with issues ranging from Social Security to federal legislation regarding marijuana. Concern for what role the federal government has in issues relating to states’ rights such as education and state lands, brought some laughs from the crowd as Rep. Curtis grinned wryly saying “this is an issue I am very familiar with,” having served as Mayor of Provo City.