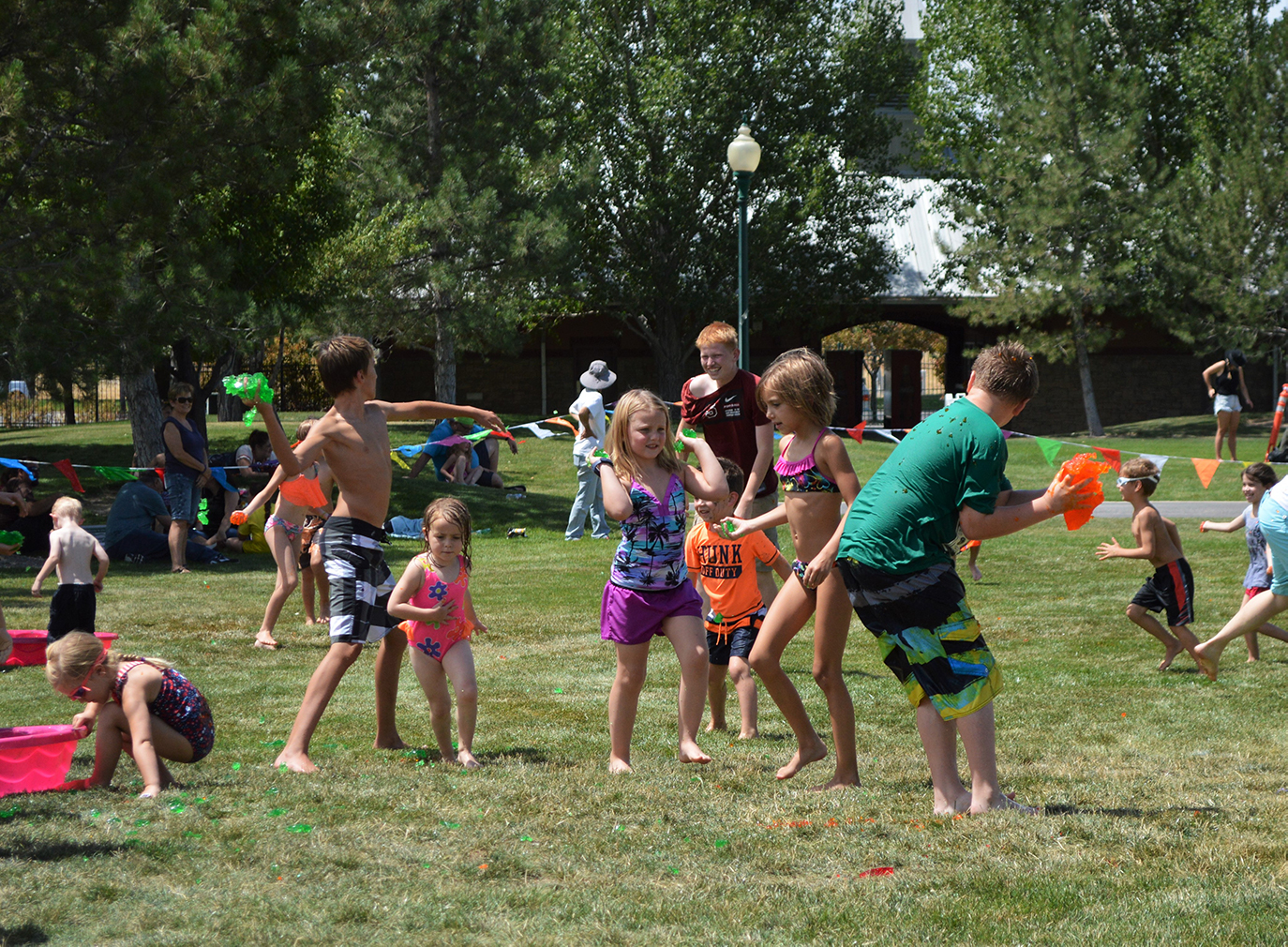 The annual Jiggle Fest and Utah Foods Cook-Off at Thanksgiving Point made the most of a perfect summer day last Saturday, July 21. This year the Jell-O fights and the food competition were held at Electric Park, making it easier for families to participate in both activities.

The kiddie-pools full of not-edible Jell-O in a rainbow of colors were replenished every hour for families who came to throw Jell-O. After the timed battles, Jell-O covered children and parents, mostly dads,  ran through sprinklers and played on the giant bounce houses arranged outside the Jell-O fight area, or participants wandered into the pavilion to check out the Utah Foods Cook-Off.

Cindy Sylvester from Herriman and her granddaughters, Ally and Brya, had a sleepover and tried a few different versions of Sylvester’s Dutch Oven dish, “Pioneer Dream Chicken” before bringing the final result to the pavilion at Electric Park. “I didn’t know we would need to have a nice display until I came in and saw how pretty everything looked!” said Sylvester. She and her granddaughters quickly got a Dutch Oven out of Sylvester’s trunk and arranged their chicken, mango, raspberry, and coconut milk concoction to better advantage. Not only did Sylvester win the first-place prize in the Dutch Oven category, her “Pioneer Dream Chicken” also won Best in Show. “How fun is that! I didn’t think we’d win anything! We named the dish ‘Pioneer Dream Chicken’ because the Utah pioneers could really only dream of eating mangos and coconut,” said Sylvester.

Once again, the Welcker family was well-represented in the Utah Foods Cook-Off, with Malina and/or Thomas Welcker placing in the top three for each of the four categories, and Thomas Welcker’s funeral potatoes taking home a first-place prize. Lanita Evans took home first and third place for her beautiful Jell-O creations. New Lehi resident Stacha Burt entered her family’s favorite fry sauce into the cook-off hoping to win a family pass to Thanksgiving Point. “My little boy, Jake, loves dinosaurs and we really want to visit the dinosaur museum as much as possible,” said Burt. Her fry sauce and Utah-shaped fries ended up getting first place and little Jake jumped up and down for joy when he heard his Mom’s name announced.

Holly Greefhurst from Orem was enlisted at the last minute to replace one of the judges for the Utah Foods Cook-Off. Greefhurst is a foodie at heart and has a Bachelor’s degree in Family and Consumer Science from Brigham Young University. “It’s hard to be original making such traditional Utah dishes,” said Greefhurst. “There were so many fun, creative recipes in the competition. Some were surprisingly different, they combined things I never considered but they definitely hailed back to the origins of the recipe and tasted really good. The ‘Pioneer Dream Chicken’ was my favorite – it was the perfect texture and an amazing blend of sweet and savory flavors.”