Couples to be honored for their service at Heritage Day: Phil & Carol Gray and Mel & Lueen Kirkham 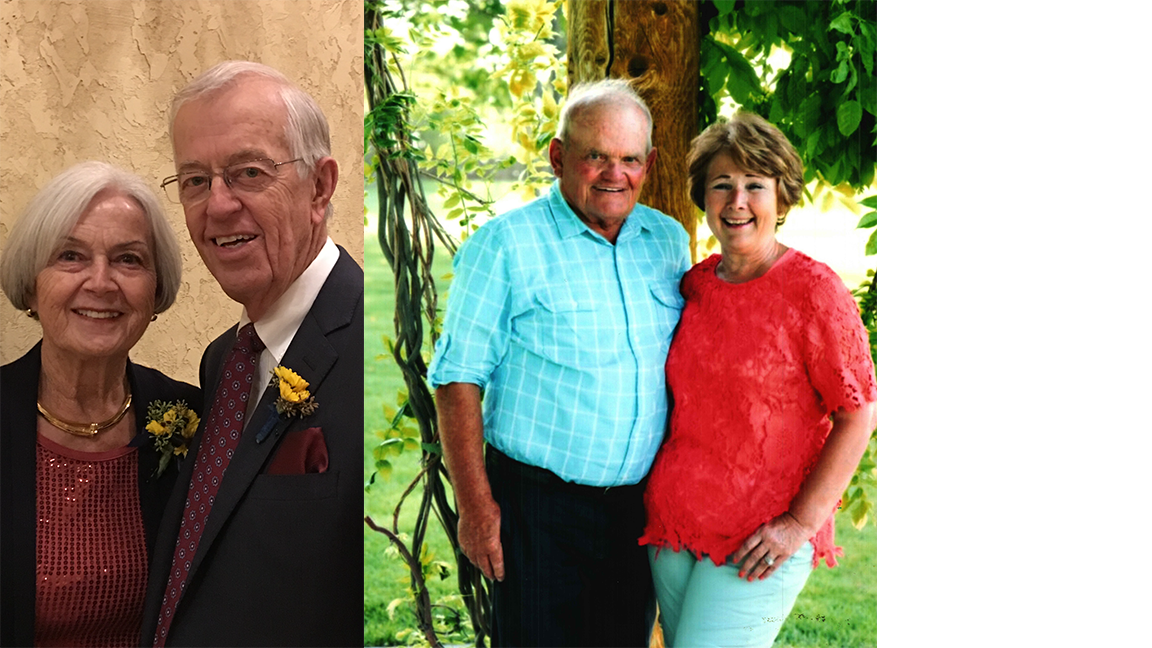 Couples to be honored for their service at Heritage Day

The community is invited to help celebrate ten wonderful couples for their significant contributions to Lehi at Heritage Day on Sept. 3, Labor Day, beginning at 2 p.m. The Lehi Free Press is highlighting these couples in the weeks leading up to the big event.

After a 2 p.m., Showcase Parade up Main Street from 400 East to the Legacy Center, each couple will be honored with their own brick in the Walk of Fame Garden in front of the Legacy Center at 123 N. Center Street.

From 4-7 p.m., historical displays, exhibits, activities, food and more will be located at the Legacy Center. This year’s Heritage Day theme is “Early Industry.” The car show will be located in the parking lot just east of the Legacy Center and will be free to enter. The day’s events are presented by The Lehi Historical Society and Archives. Call 801-768-1570 to enter the car show or for more information.

Phil and Carol Gray honored for work with youth and community

From scouting to fostering children, Phil and Carol Gray have given tremendous service to

the youth of Lehi. The parents of five children, the couple welcomed nearly 200 foster and shelter children into their home over the years—some for as little as one day and others for up to five years.

Phil served in several LDS bishoprics, as a member of a stake presidency, in a bishopric at UVU and for four years in several branch presidencies at the Missionary Training Center in Provo. Phil has always been an avid

scouter, serving as Scoutmaster, Varsity Advisor, and District Commissioner. He received the District Award of Merit, the Second Miler Award, and the prestigious Silver Beaver Award. He also served on a Timberline staff, attended Wood Badge and served on four Wood Badge staffs.

Carol served in Cub Scouts as Wolf, Bear, and then Webelo’s leader for the age group of their son, Jared. When that group moved to Blazers, Phil became their leader, and Carol became the Wolf and Bear leader for the age group of their son, Travis. Carol worked in the District Cub Scouting program for several years and had a Girl Scout troop for several years when their daughter, Jodi, was in the troop. Carol has worked in all of the auxiliaries of the LDS Church and has served in a stake Primary Presidency.

45 years. He was director over ticket sales. He and Carol took over from Blackie Harris when the CIA started selling tickets online, which was a program they instituted. Working with the CIA was a great opportunity to work with Lavere Downs, George Tripp, Mike Southwick, Stan Lewis and many more exemplary men who set such an example of service to the community.

Phil and Carol were both born in Provo in 1942 and 1950, respectively. In 1957, Carol moved to Lehi with her family on the property where the Gray’s now live. Carol attended schools in Lehi and graduated from Lehi High in 1968. Phil graduated from Provo High

School in 1960. He immediately joined the National Guard in an engineering battalion and stayed in for eight years. During that time, he helped build the road from Provo Canyon to Hobble Creek Canyon, the Butterfield Canyon road and the road from Alpine to Draper.

Phil graduated from Weber State College in biology and began working for the VA Hospital in GI research. He transferred to the University of Utah Hospital in GI research and finished his career at Huntsman Cancer Center in cancer research. After raising her family, Carol worked as a secretary, a registrar for the school district and then as a real estate agent until she retired

Phil and Carol were married in 1970. Phil served as an EMT for Lehi for 10 years and on the Civic Improvement Association for 45 years. For many years, Carol worked with children in the Cub Scouts and Girl Scouts. | Courtesy Phil and Carol Gray

The couple was married in 1970 in the Salt Lake Temple. They have five children: Jodi (Cory) Nostrom of Provo, Jared (Heidi) Gray, Travis (Cristi) Gray, Krissi (Brady) Mortensen, and Lindsey (Bryson) Davis, all living in Eagle Mountain. Their children have blessed them with 16 grandchildren.

Life in Lehi has been a wonderful blessing and a distinct lifestyle for the couple. They love the feeling of community and the opportunity to serve and grow here.

Both Phil and Carol have rich pioneer heritage. Phil’s grandfather came across the plains with the pioneers as a two-year-old child. Phil’s grandmother joined the LDS Church in England and came to America on the Perpetual Immigration Fund as a small child.

One of Carol’s ancestors was Lyman Curtis who came across the plains with Brigham Young and served as the wagon train’s hunter, providing fresh game for the weary travelers.

Mel and Lueen Kirkham worked to save the Lehi Outdoor Pool

Mel and Lueen Kirkham enjoy supporting all kinds of community events, including Heritage Day, the library fundraiser, high school events and city celebrations like Round-Up. The couple was also key to helping save the Lehi Outdoor Pool. | COurtesy Mel and Lueen Kirkham

Mel and Lueen Kirkham were instrumental in saving the Lehi Outdoor Swimming Pool when the City considered demolition instead of making repairs.

Since 1965, the couple has loved living across the street from the pool where their children grew up swimming every day in the summer. They continue to be grateful

to Lehi City for upgrading the facility, so Lehi residents may continue to enjoy it today.

Mel and Lueen have been loyal and dedicated citizens of Lehi throughout their lives. Lueen volunteered on numerous float committees and sewed costumes so her children could participate by riding or pulling a float. Mel served on the Lehi City Council for four years from 1974-1978. He also served as a member of the board of directors for the Tri-City Golf Course, representing Lehi’s interest.

Together, the couple enjoys supporting all kinds of community events including Heritage Day, the library fundraiser, high school events and city celebrations like Round-Up days.

Every year, the Mel and Lueen Kirkham family reunion is centered around Lehi Round-Up. It has become a cherished tradition for the family of 55. Together, they go to the parade and the rodeo, where they sit in the same section every year.

For the parade, the family has a special gathering place. It is the front lawn of their pioneer ancestor, Andrew A. Peterson, who lived in the house just west of Lehi Bridal and is now owned by the Glen and Connie Nielsen family. Connie was Mel’s sister. Mel and Lueen have been thankful that the Nielsens have allowed them to watch the parade from the same place their ancestors did. All of this has been done to help their children remember their heritage and the great community that has been an integral part of each of their lives.

Mel and Lueen were both raised in Lehi. Mel was the oldest of eight born to Leon and Violet Kirkham. Lueen was the youngest of Virgil and Leota Peterson’s six children. The romance between the two began when Mel returned from the Eastern States Mission in the spring of 1957. They were married on Mar. 12, 1958.

The couple recently celebrated their 60th wedding anniversary. They are the parents of seven children, Michelle, Todd, Melanie, Darin, Jennifer, Judd and Anilee, and the proud grandparents of 28 grandchildren and seven great-grandchildren.

Both have a rich history of pioneer ancestors who settled in Lehi. They are proud of that heritage and the legacy of those early ancestors and others that followed them.

Mel spent 53 years in the banking industry, working for Valley Bank & Trust and Zions Bank. In January of 2017, he retired as a member of the board of directors for Bank of American Fork. Lueen worked at State Bank of Lehi for a few years before their first child was born. Afterward, she enjoyed being a full-time mother.

The couple moved to Cedar City in 1960, following a transfer when Mel worked for Securities Acceptance Corp. Three years later Mel accepted a position with Valley Bank & Trust, and they moved to Salt Lake City. In 1965, after their third child was born, they moved back to Lehi to the home they live in today. They were happy to be back in Lehi surrounded by family and friends. They feel fortunate to have six of their children living in Lehi and one nearby in Alpine.

Both have served faithfully in LDS ward and stake callings. In 2008, they served an LDS mission in the Hawaii Honolulu Mission at the Temple Visitors’ Center in Laie.